‘Who was going to make the next move?’ 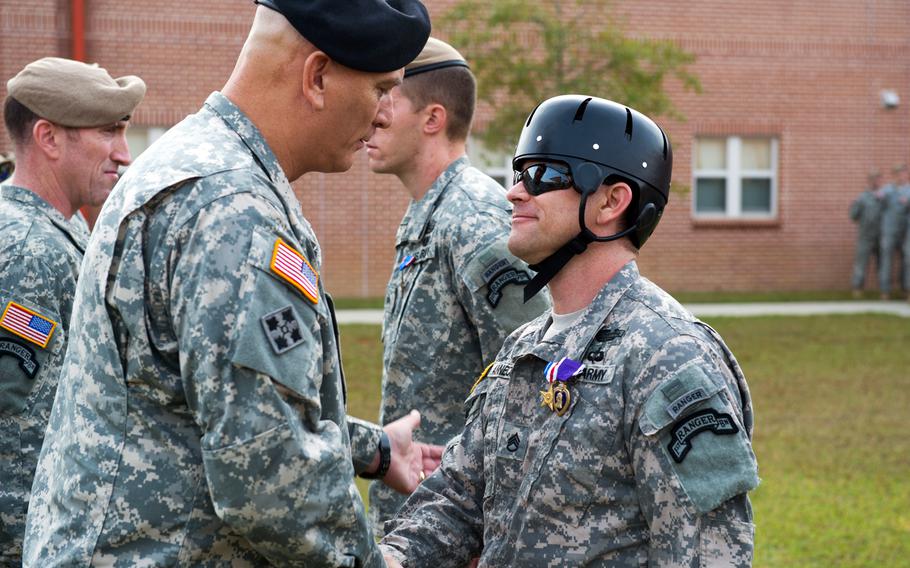 Almost finished clearing a rural compound, Staff Sgt. Dominic Annecchini opened the last door for an Afghan soldier to enter, and five or six shots burst out. The Afghan, critically wounded, fell into the room with the enemy.

What Annecchini did next on May 16, 2012, in eastern Afghanistan earned him the Silver Star.

The Army Ranger, on his 10th deployment, was mentoring a unit of Afghan special forces soldiers. That night, on a mission to capture or kill a high-value target, the Afghans were in the lead. With the Rangers outside, the nine Afghan soldiers made their way through the long, rectangular building without incident, removing civilian men, women and children as they went.

About three-quarters of the way through, Annecchini joined another Afghan soldier to clear a low-ceilinged, dirt-floor room in the back. The first part of the room was empty, but five insurgents had barricaded themselves behind another door and were ready for a fight.

Immediately as the Afghan soldier stepped through the door, “I realized I was hearing gunfire and so I backed out of the door,” Annecchini said.

The Afghan soldier muttered something in Dari and crashed to the ground inside the room. The firing stopped.

“It was kind of a ... standoff at that point,” Annecchini said. “Who was going to make the next move? I didn’t know what condition [the wounded Afghan] was in, but I knew it wasn’t good.”

He radioed to the other Rangers outside that they had a casualty.

“Annecchini had a choice to either remain behind cover or to deliberately enter the room where one Afghan soldier had already been critically wounded by enemy fire,” according to the Silver Star citation.

“ ‘Go in and get him out.’ That’s the last thing I remember thinking,” he said.

He woke up at Landstuhl Regional Medical Center in Germany.

As Annecchini had “fearlessly exposed himself to effective fire from multiple barricaded shooters in order to rescue” the Afghan soldier, the citation states, he was shot above the right eye.

The injury was severe and Annecchini had to have a large piece of his skull removed to allow his wounded brain to safely swell. The Ranger, with the 1st Battalion, 75th Ranger Regiment, spent months rehabilitating and went eight months without a forehead before another surgery replaced the missing piece with a titanium prosthetic.

His Afghan soldier died from his wounds that day, but as the citation states, “Annecchini’s efforts were not in vain, as his suppression of the enemy undoubtedly saved the lives” of the other Afghan soldiers and Rangers “who followed him into the compound and forced the enemy to attempt to break contact.”