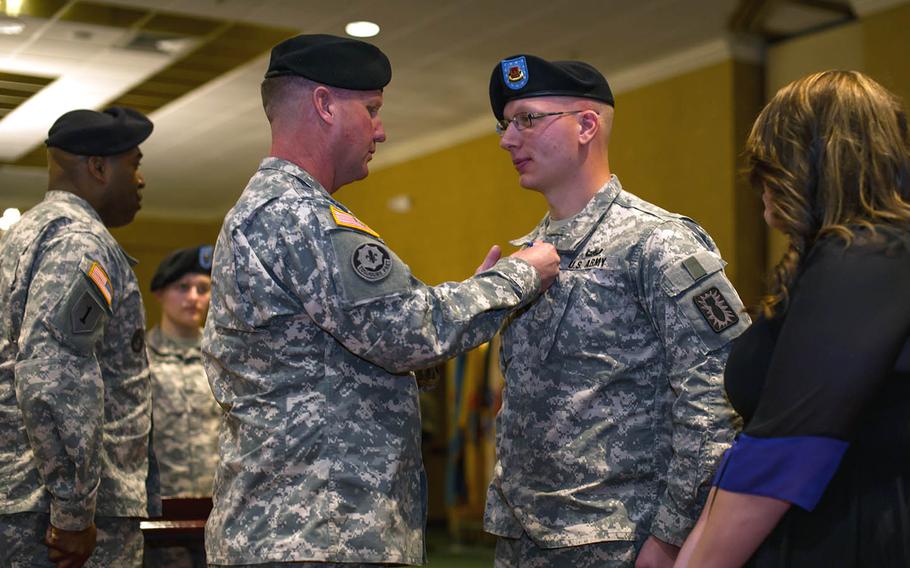 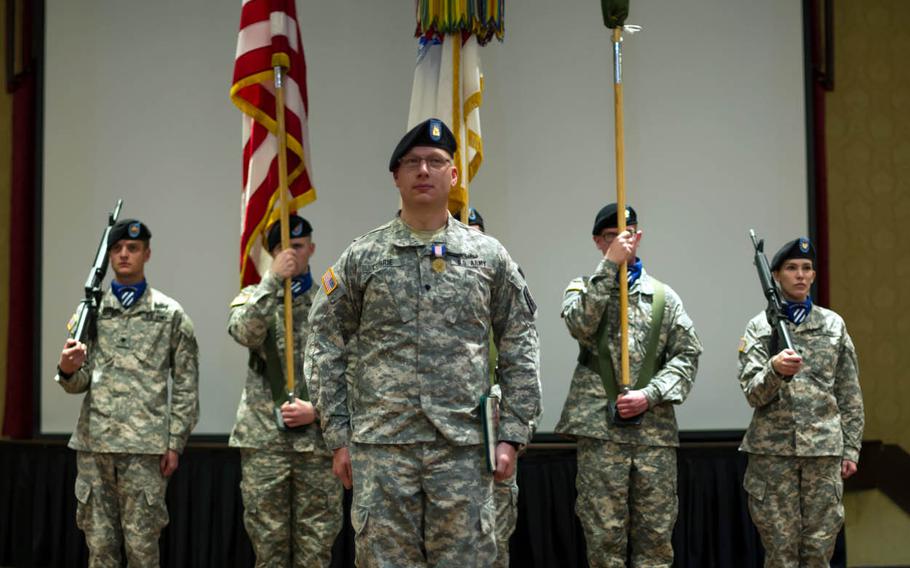 Spc. Nathan Currie was awarded the Army's highest noncombat honor medal for his heroic actions in August 2014, pulling the driver out of a vehicle submerged in an alligator-infested pond in Georgia. (Richard Wrigley/U.S. Army) 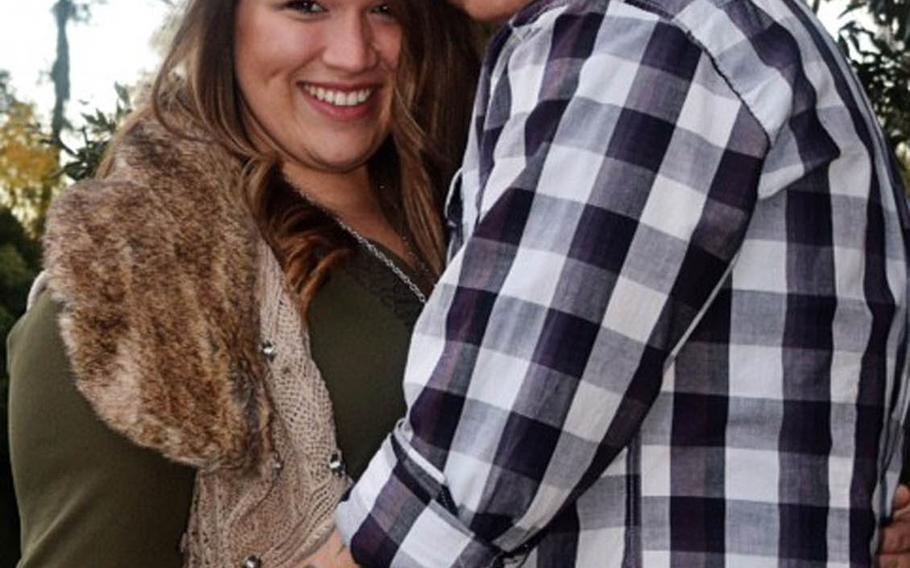 Army Spc. Nathan Currie says of his wife, Mandy: "She's my rock." In February 2015 he was awarded the Soldier's Medal, the Army's highest noncombat honor. (Courtesy of Nathan Currie) 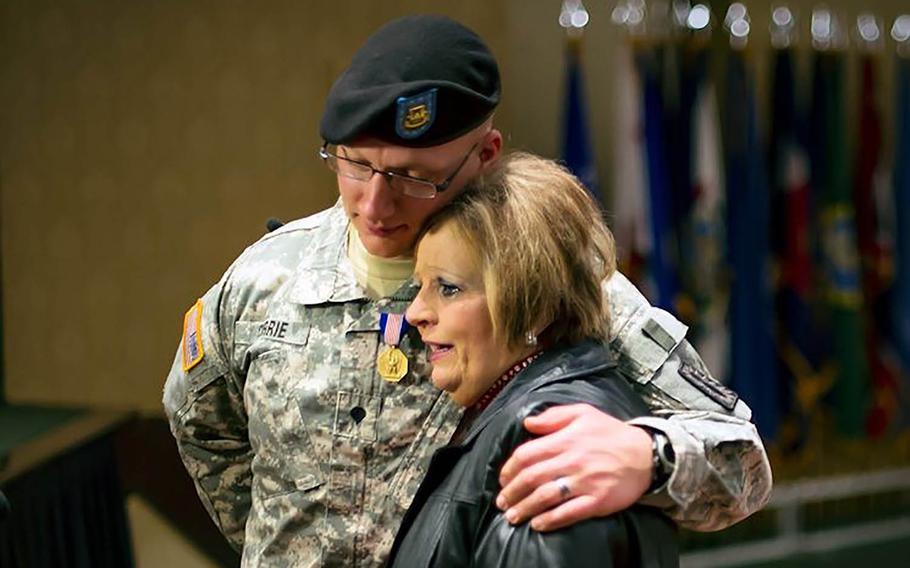 Army Spc. Nathan Currie shares a moment with Lora Chancey after receiving the Soldier's Medal on Feb. 26, 2015, for pulling Chancey out of a submerged vehicle in Holbrook Pond on the Fort Stewart base in Georgia. (Richard Wrigley/U.S. Army)

Aug. 23, 2014 Fort Stewart, Ga. Army Spc. Nathan Currie has learned a lot about heroism since the day he became a hero. That acts of bravery are often riddled with mistakes. That they bring regret, and that they can be ugly beyond imagination.

It was a perfect August morning in Georgia and Currie, then 27 and a private first class, was bent over his fishing tackle box to fix a snagged lure when he heard the splash.

Lora Chancey had been driving home on Aug. 23, 2014, when a flash of deer distracted her. She remembers swerving to miss them, but not much else.

Currie straightened up and squinted in the direction of the sound.

“That’s a weird place to put in a boat,” he thought. There was no ramp, just a nearby playground where the adults, too, now stood up staring in the direction of the sound.

“I saw something gray floating in the water. It was legitimately floating away,” he said. “Then I saw brake lights.”

Then a second thought: “What if somebody is hurt?”

He ran to his car, calling 911 on the way. Holbrook Pond at his Fort Stewart base in Georgia isn’t big; he thinks it took him about two minutes before he headed into the water. Currie dropped his phone and jumped in.

The car was belly-up and submerging to its wheels — about chest deep for Currie. The alligator-infested water was brown and slimy. He said he kept his head above water and moved his arms through the open front seat window.

He stretched his fingers blindly in the water to feel across the seat. No body. He fumbled for the door handle and accidentally hit the window button instead. The window started to close on his arm.

He jolted back, stopping the window halfway.

He knew he had to go underwater.

He plunged his hand back in and grabbed the door handle, wedged the car door open, took a deep breath and went under.

“I swam into the car. I got all the way to the passenger side door and came up for air,” Currie told Stars and Stripes. “I didn’t find anybody.

“I reached behind the back seat with my right arm and then I felt her shoulder. Then her neck and then her head. Almost like she was laying down in the back seat.”

He gripped Chancey’s body, guiding it to the door, but it was slippery from the pond scum. The back door window was open, but her body was floating to the top of the car. He had to force her down to the window, and in his urgency he hit her head against the door as he pulled Chancey through it.

When bystanders saw him come above water with a body, one rushed in to help. They tried to hold on to the woman. But Chancey had been underwater for about five minutes. Her skin and face were a sickly grayish-green.

“I knew she was dead,” Currie said.

As the men pulled her to land, she kept slipping from their grip and falling back into the muck.

They got her to the shore and Currie had another choice: to try CPR rescue breathing until an ambulance came. It had been a long time since Currie had practiced that, but his brain snapped into action.

“When I gave her the rescue breath, the most ungodly gurgle sound ever came out of her mouth. I thought, ‘This is pointless; she’s gone,’ ” he said.

But he cycled again. On the third try, Chancey coughed.

“I cannot describe how this made me feel,” he said. “ ‘Holy crap. This stuff actually works.’ ”

Chancey came to. She was OK and knew her name. Currie said she kept repeating three words: “Two baby deer!”

Currie had held it together and saved a life. His cellphone was on the ground where he’d dropped it before plunging in. He thought about calling his wife but he couldn’t.

Instead, he got in his car in his sopping wet jeans, boots and a long-sleeve shirt. He drove home. Mandy was there. As soon as he saw her, he broke down.

In February 2015 Currie was awarded the Soldier’s Medal, the Army’s highest noncombat honor, for the heroism he displayed saving Chancey’s life.

She was at the medal ceremony.

“He is my hero. He is absolutely my hero,” she told the Savannah Morning News. “He’s wonderful and so humble. He and his wife came to the hospital a couple of times to see me, to check on me. We’ve run into them a couple of times since then, and he’s just a very humble, great guy. Just a great guy.”

Currie wants a full 20-year career in the military, but he said the actions of that day still linger — something he doesn’t think many people understand. Chancey, who could not be reached for comment, has repeatedly called him a hero in the press, as has everyone else. But Currie knows there’s more to acts of heroism.

“It’s not like a movie,” Currie said. “It’s not like I just swooped in. It probably took me two minutes just to find her in the car. I kept hitting her head against the door … she kept slipping out of my hands.”

“The bad thoughts started to creep around. What if she didn’t survive? What if she’d died in my arms?”