Welsh: Open to all options to stop military sexual assault 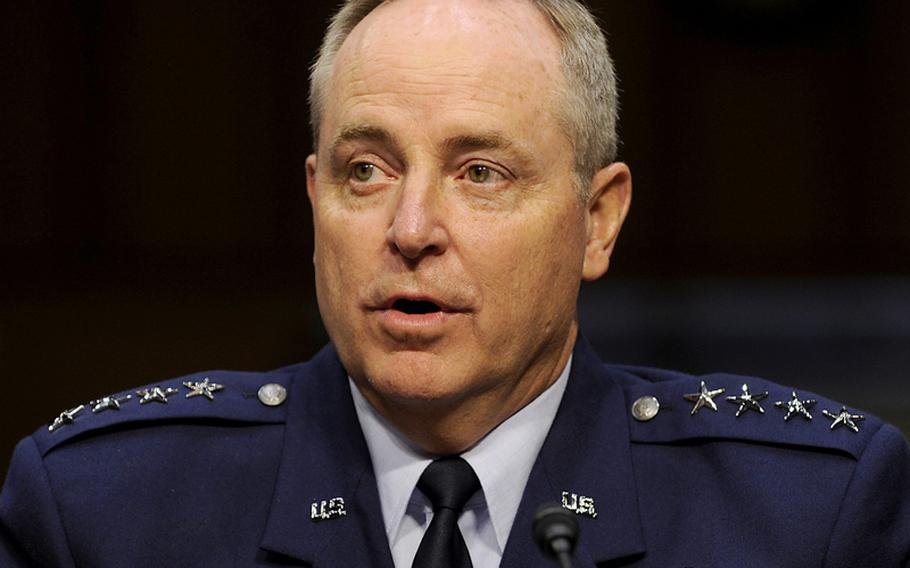 WASHINGTON — As the president continues to press top military brass to stop sexual assaults and a third man in charge of sexual assault prevention is accused of misconduct, the Air Force chief of staff said he’s open to doing what advocates have been suggesting for years: Removing the authority to prosecute sex crimes from the chain of command.

Currently, commanders are responsible for initiating courts-martial against alleged attackers in their own chain of command, and for reviewing the results of courts-martial. Victims and advocates say that system discourages victims from reporting and can lead to problems when the accused has a better reputation within the unit than the victim does.

Gen. Mark Welsh told reporters Friday morning that he believes “all options should be on the table” for addressing sexual assault, and that he is “open” to taking some of the UCMJ authority that exists now on sex crimes out of the chain of command. He also said he believes it’s time to strip from commanders the ability to reverse courts-martial findings, though he said he believes commanders should retain the authority to reduce sentences.

The issue came into the spotlight earlier this year, when an Air Force lieutenant general decided to overturn the sexual assault conviction and sentence of a fighter pilot in Italy.

Defense Secretary Chuck Hagel has proposed eliminating the ability of commanders to overturn convictions, though they would still be able to reduce sentences.

On Wednesday, another sexual assault prevention officer was arrested after he was accused by his ex-wife of violating a protective order, according to Army officials.

Lt. Col. Darin Haas was suspended from his job at Fort Campbell in Kentucky in the Equal Opportunity and Sexual Harassment/Assault Response and Prevention program, Army officials said. He was released Thursday on a $15,000 bond.

“This is a domestic matter and not a case of sexual harassment or assault among sodliers and subordinates,” Army spokesman George Wright said.

President Barack Obama on Thursday called the military’s top leaders to the White House to discuss the sexual assault crisis. After the meeting, he said he had asked Defense Secretary Chuck Hagel and Chairman of the Joint Chiefs of Staff Gen. Martin Dempsey to “lead a process to continue to get at this.”

Sexual assault in the military “is dangerous to our national security,” he said. “This goes to the heart and core of who we are and how effective we’re going to be.”