As the game progresses, Aiden’s journey leads him from downtown Chicago to gang-infested neighborhoods to the doorstep of the huge Blume Corp., which has Chicago under its digital thumb. (Courtesy of Ubisoft)

As the game progresses, Aiden’s journey leads him from downtown Chicago to gang-infested neighborhoods to the doorstep of the huge Blume Corp., which has Chicago under its digital thumb. (Courtesy of Ubisoft) 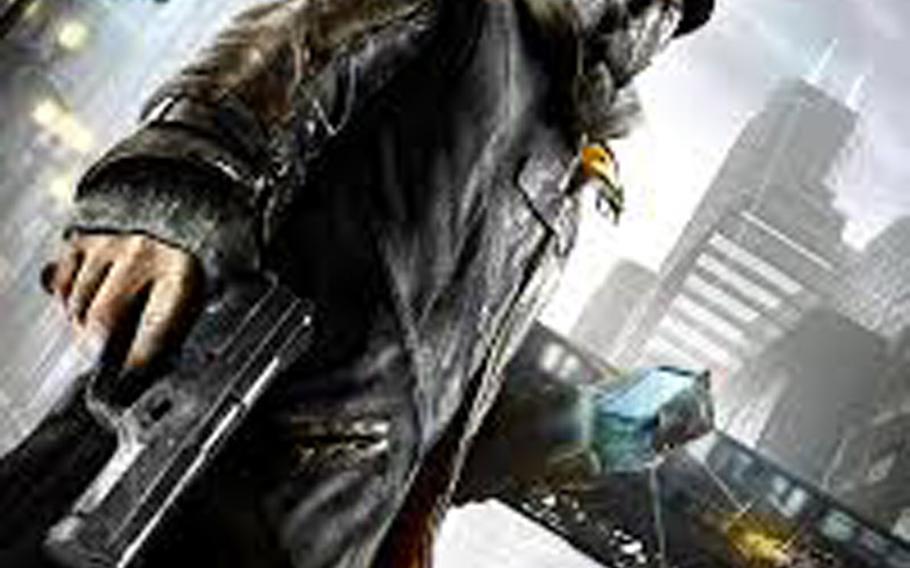 Many of the most satisfying events in the game combine hacking and gunplay. The campaign missions and side quests contain numerous battles, usually against gangsters, militia members or Blume security personnel. And if you don’t mind taking a major hit to your reputation, you can also do battle with Chicago’s police department. (Courtesy of Ubisoft) 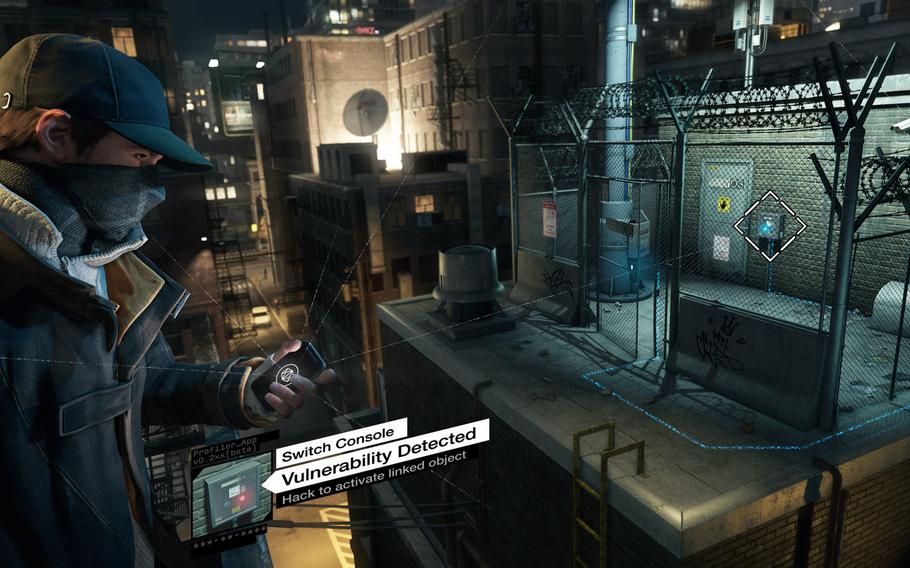 Aiden’s main tool is his cellphone, which he uses to hack into Blume’s electronic grid, which supports and connects practically everything that happens in Chicago. (Courtesy of Ubisoft)

Ubisoft’s “Watch Dogs” promises a new sort of open-world adventure, where a digital vigilante battles corrupt authorities in an effort to break their stranglehold on Chicago.

The game does a pretty good job of delivering on those promises — except for the “new” part.

Over the past few months, we have seen a number of games offer exactly the same scenario. “Batman: Arkham Origins,” “Saints Row IV” and most recently “inFamous: Second Son” have featured protagonists with special abilities who fight villains in expansive city environments. And if you stretch the meaning of the term “special abilities” to include thuggery, you could add “Grand Theft Auto V” to the list.

In fact, “Watch Dogs” plays a lot like “Grand Theft Auto,” with the major difference being that you shake down passers-by by hacking their cellphones instead of beating them to a pulp.

But none of this means that “Watch Dogs” isn’t a good game.

It’s well-designed, delivers superb graphics and offers action that’s intense and engaging. And, although much of the game seems very familiar, it actually does present some interesting new gameplay opportunities thanks to the ability of players to enter each other’s games.

You play as a hacker named Aiden Pearce. In the opening scene, Aiden stirs up trouble by trying to electronically loot a fancy hotel. This prompts a mysterious villain to strike back in an incident that kills Aiden’s beloved niece and spurs a quest for vengeance.

As the game progresses, Aiden’s journey leads him from downtown Chicago to gang-infested neighborhoods to the doorstep of the huge Blume Corp., which has Chicago under its digital thumb.

Aiden’s main tool is his cellphone, which he uses to hack into Blume’s electronic grid, which supports and connects practically everything that happens in Chicago. He can change stoplights, open doors, operate machinery, intercept transmissions, access video cameras, raise bridges and even cause local blackouts. These are helpful in gaining access, pilfering information, stealing funds and covering his tracks. It’s like having Batman’s entire arsenal of gadgets contained in one handy item.

But unlike the caped crusader, Aiden isn’t averse to killing his foes. He can use his phone to hack explosive devices hidden in the environment or carried by enemies. Or he can simply pull out a gun and blast away.

Many of the most satisfying events in the game combine hacking and gunplay. The campaign missions and side quests contain numerous battles, usually against gangsters, militia members or Blume security personnel. And if you don’t mind taking a major hit to your reputation, you can also do battle with Chicago’s police department.

Although you can go into almost any encounter with guns blazing, I find it much more satisfying to sneak around the edges and use the electronic environment to soften up my enemies. For example, you can hack cameras and examine your foes and their surroundings for strengths and vulnerabilities. One enemy might be carrying explosives that you can detonate or have communications gear that you can silence. A wall might contain electrical equipment that can explode or a steam valve that can be released. It’s usually possible to thin the ranks even further by using a silenced pistol before opening up with heavier weaponry.

But I have to admit that relying heavily on firearms seems to go against the spirit of the game. The defining element of “Watch Dogs” is hacking. The more you resort to firearms, the more the game seems like “Grand Theft Auto” or “Saints Row.”

No matter how you approach the battles, though, they are the most intense and enjoyable parts of the game.

The game also offers a lot of excellent puzzles. Aiden spends a lot of time gaining access to places he isn’t wanted or investigating crimes that turn up during campaign missions. Many of these involve using a network of cameras to locate and unlock access points. Others involve manipulating elements of a “computer code” to create a path to the desired information.

While Aiden does a lot of crime-solving and gang-busting, his path isn’t exactly straight and narrow. Of course that shouldn’t be a surprise since his journey was sparked with a failed heist and propelled by vengeance. In addition to leaving a trail of bodies in his wake, Aiden funds his operations by hacking bank info from innocent passers-by and he steals a lot of cars. But despite this rob-from-the-poor-and-keep-for-himself ethic, Chicago’s citizens are inclined to see Aiden as a vigilante working on their behalf rather than a thief.

That is, if you play the game the right way. If you stop a crime in progress or break up a gang, your popularity increases. If you run over pedestrians or shoot cops, it declines. The practical benefits of good cred are ample. You have a much lower profile with the police, and citizens are looking the other way when you commit crimes. If your profile is high, it’s hard to accomplish anything between the police chases.

“Watch Dogs” delivers a solid selection of side quests and mini-games. In addition to stealing cars and solving crimes, activities including shooting up convoys of criminals, solving chess-themed puzzles or engaging in reflex-based “drinking games.” The best mini-game is “Spider Tank,” which takes a step outside of the game’s version of reality to let you take command of a giant mechanical spider stalking the streets of Chicago. It’s very well-designed and incredibly fun.

Since “Watch Dogs” is a game about online connectivity, it isn’t surprising that it offers an interesting selection of multiplayer activities. You can hack other players’ cellphones, race them through the streets of Chicago or join a team to decrypt computer files. Invitations to join other players pop up pretty frequently, and you can simply ignore them if you choose.

However, you can also bring the outside world into your game uninvited if you hack the cellphone of someone identified as a “Blume affiliate.” This will send a warning to Blume, which places a bounty on your data. Another player is likely to choose to accept the challenge and try to hack your phone. You’ll receive a notice that you’re being hacked and be given a chance to find the perpetrator. If you find and stop him, you earn a reward. If you don’t, your foe does. If you don’t like this sort of intrusion, you can simply avoid hacking anyone identified as a “Blume affiliate,” or you can hack him, gain access to his money and then grab his phone before he can contact Blume.

All of this hacking and spying evokes headlines concerning the National Security Agency, WikiLeaks and identity theft. However, any political or social messages along these lines get submerged in Aiden’s single-minded quest for vengeance and the idea that ends justify the means. While the story is deep and pretty interesting, I have to admit that Aiden came off as more of a self-righteous thug than a heroic Robin Hood saving the city from digital doom.