‘We weren’t out there looking for awards’ 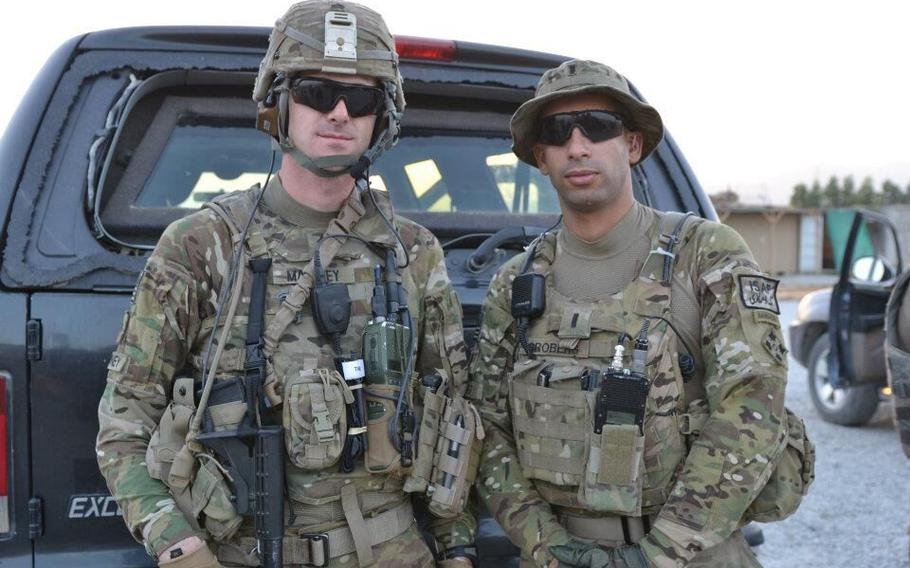 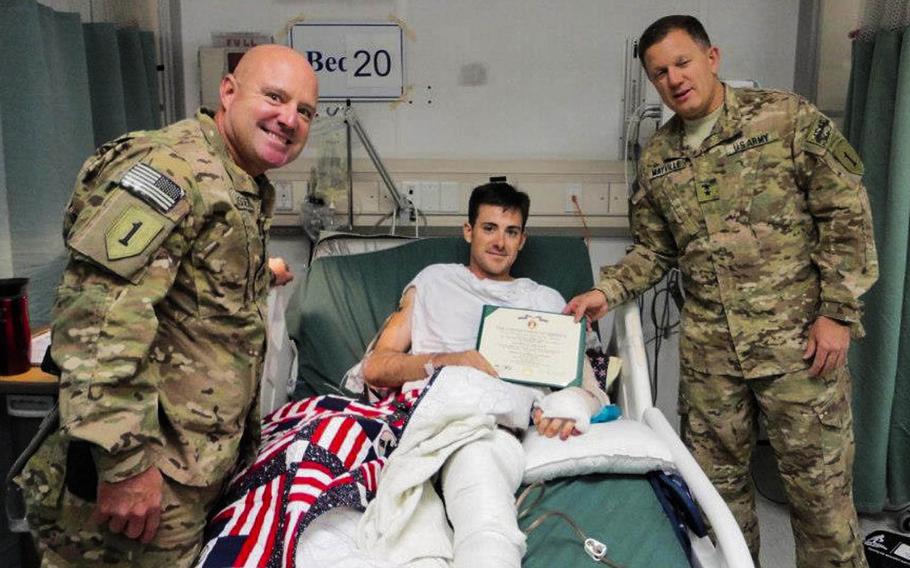 Sgt. Andrew Mahoney receives his Purple Heart after being injured in a suicide bomber attack in Asadabad, Afghanistan, on Aug. 8, 2012. (Courtesy of Andrew Mahoney) 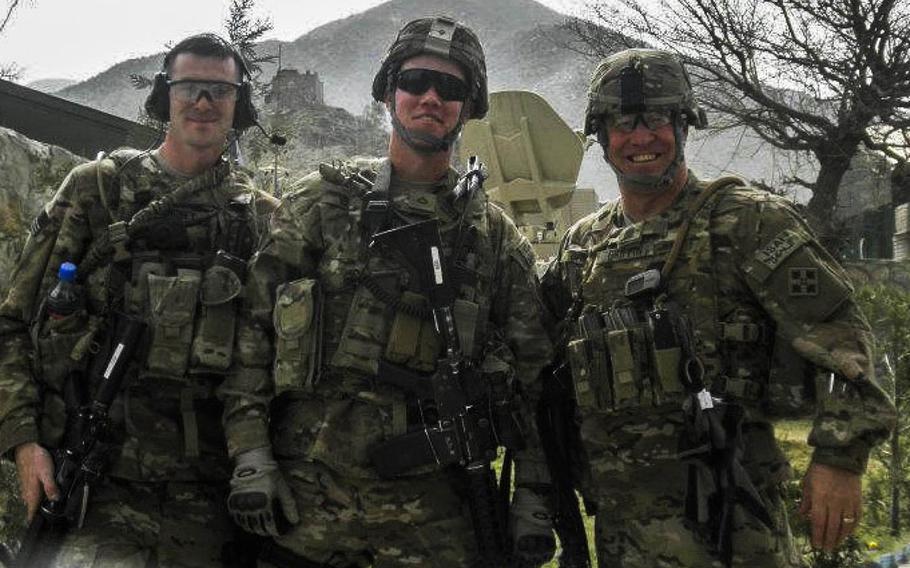 Sgt. Andrew Mahoney, left, Pfc. Benjamin Secor and Command Sgt. Maj. Kevin Griffin -- all with the 4th Infantry Brigade Combat Team, 4th Infantry Division -- on a mission at Regional Command-East, Afghanistan, in 2012. Griffin was killed by a suicide bomber attack in Asadabad, Afghanistan, on Aug. 8, 2012, the same attack in which Mahoney was wounded. (Courtesy of Andrew Mahoney)

Aug. 8, 2012 Asadabad, Afghanistan For every Medal of Honor recipient, there are men who have recorded incredible feats of bravery on the battlefield.

The Department of Defense is making an effort to fix that injustice. Defense officials are currently reviewing the cases of more than 1,000 top-level valor awards to determine whether they should be upgraded to Medals of Honor.

The case of Army Sgt. Andrew Mahoney is among them.

On Aug. 8, 2012, Mahoney, along with the rest of Task Force Mountain Warrior, a personal security detachment with the 4th Brigade Combat Team, 4th Infantry Division, began a routine movement.

The team, led by Capt. Florent “Flo” Groberg, was to escort several high-level officials from Forward Operating Base Fiaz in Asadabad, Afghanistan, to a nearby provincial government compound. Among them was the brigade commander, then-Col. James Mingus.

As they neared a bridge, two motorcycles approached the patrol from the front, a ploy to get attention. Groberg and Mahoney noticed a man off to the side, acting suspiciously.

“He was walking backward toward us, which is extremely out of the ordinary,” Mahoney said in an interview with Stars and Stripes. “As he turned around, there was very obviously a bulge under his top.”

The man was one of two suicide bombers targeting the patrol that day. Mahoney said Groberg rushed the bomber, and Mahoney was right on his heels. Together, they forced the attacker backward and tackled him to the ground, seconds before he detonated the suicide vest he was wearing. A second bomber detonated his bomb soon after the first.

“There was no other option, basically. I guess instinct kicked in,” Mahoney said.

“As he went down he came down on his chest, where the vest was against the ground, so when he detonated the majority of the explosion went into the ground and we just kind of caught little bits and pieces of it.”

Those “bits and pieces” sent Groberg flying across the road, his left leg mangled. Mahoney was severely wounded as well.

“Soon as it happened and I regained my senses — I don’t remember being knocked out; I more than likely was but I’m not sure — I looked myself up and down. There was blood all over my arm, all over my legs. My left arm had been blown open to the bone,” he recalled.

Even though injured, Mahoney continued his mission, calling for medical evacuation before securing the surviving officials. He and another soldier took Mingus across the road to take cover behind a small, chest-high wall.

“At this point we’re thinking complex ambush, something else is going to happen,” Mahoney said. Then the second bomber detonated his bomb.

While in cover, Mingus applied a tourniquet to Mahoney’s arm while members of the security team provided medical aid to the wounded. They remained there, waiting for a follow-up attack, until they were evacuated to Fiaz.

Once evacuated, Mahoney said the adrenaline wore off and he was struck by all that had just happened.

“The pain was terrible,” he said. “I was screaming at the medics in the aid station. I was not a good patient to treat, I’m sure.”

The injury to his arm was too severe to treat in Afghanistan so he was airlifted to Landstuhl Regional Medical Center in Germany. The staff there assumed he wanted to medically retire. Mahoney shocked them by saying he wanted to remain in the service.

“I don’t want to get out,” he told the staff at the time. “As long as I’m still capable, I’m going to keep doing it.”

The events of the 2012 attack have been recounted several times, including by President Barack Obama when he awarded the Medal of Honor to Groberg for preventing the deaths of dozens of men that day.

Mahoney was awarded the Silver Star. His medal is under review to see whether Mahoney’s actions deserves the Medal of Honor.

The Michigan native, who married his girlfriend, Melanie, while he was recovering from his wounds, says he doesn’t particularly care. His reward, he said, was being able to continue serving.

“Nobody does what they do for fame and fortune,” he said. “You do it because you signed a paper to support and defend the Constitution of the United States and to protect your brothers and sisters to your left and right. We weren’t out there looking for awards.”