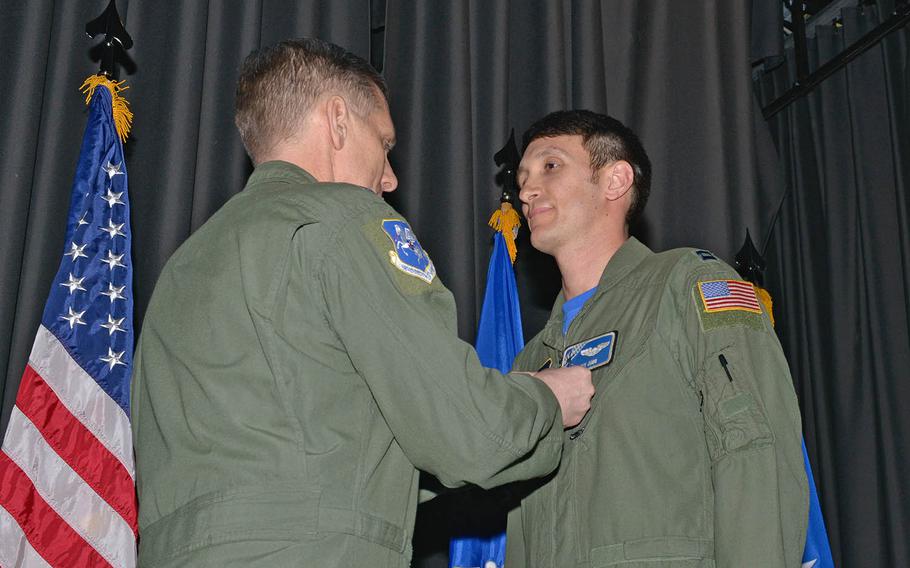 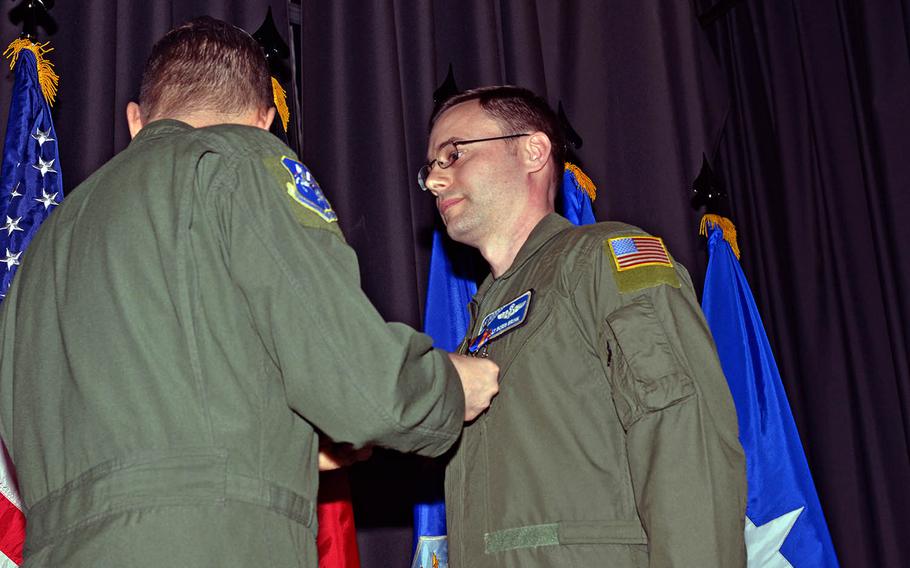 Master Sgt. Boris Brink, 37th Airlift Squadron operations superintendent, receives the Air Medal from Lt. Gen. Timothy Ray on Feb. 19, 2016, at Ramstein Air Base, Germany. Brink and three others earned the medal, which is awarded for single acts of heroism or meritorious service in flight, for actions May 24, 2014. (Lane T. Plummer/U.S. Air Force) 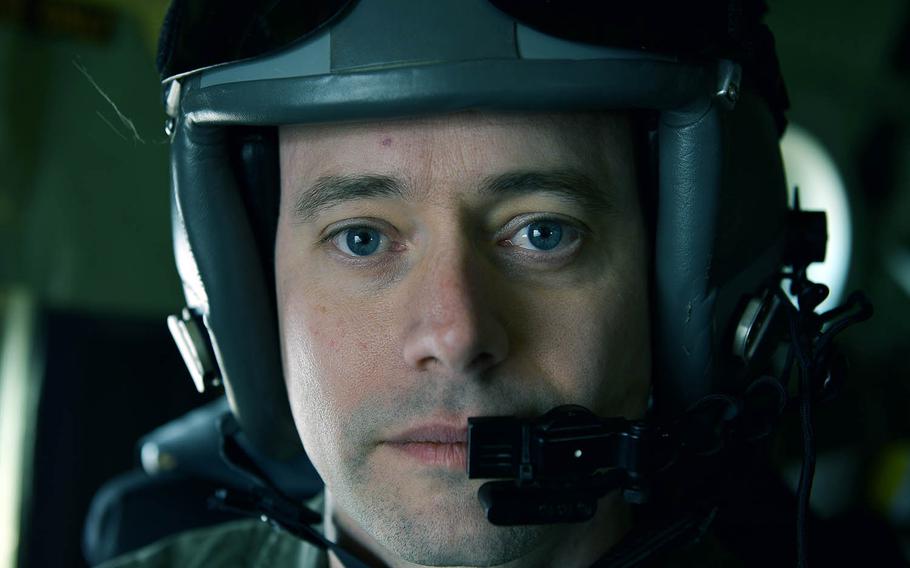 For 11 U.S. Air Force members and 80 French passengers aboard the C-130J Super Hercules that took off for an evening flight about two years ago from a rural outpost in Mali, West Africa, what happened next could have spelled disaster.

Shortly after takeoff, the aircraft’s rear cargo ramp door opened after a component inside the ramp malfunctioned.

As air and dust swirled into the cargo hold, the experienced C-130 fliers based out of Ramstein Air Base, Germany, were faced with an emergency that none of them had even heard of in years of flying.

Troubleshooting efforts failed. The wide-open ramp door was broken and could not be shut.

With their destination about 500 miles away across the vast countryside, the two pilots and loadmasters took charge, remained calm and came up with a plan that resulted in a three-hour nail-biting flight and a flawless landing using night-vision goggles.

For their actions on May 27, 2014, pilots Capt. Derrick Hoxie and Capt. Kenneth Jubb and loadmasters Master Sgt. Boris Brink and Tech. Sgt. Justin Pike earned the prestigious Air Medal, awarded for single acts of heroism or meritorious service while in aerial flight. The Air Force credits the airmen with saving the lives of 80 passengers and the entire aircrew while salvaging a $70 million aircraft and 5,000 pounds of equipment.

The airmen, at the time assigned to Ramstein’s 37th Airlift Squadron, were in West Africa for a two-week mission to support Operation Serval, the French military operation to oust Islamic militants from north Mali.

Their mission was to transport 80 French troops and cargo to Bamako, where the deployed soldiers were to catch an Air France flight home.

The C-130 took off at dusk from a gravel airfield at a small forward operating base in east Mali.

Right after takeoff, a warning light came on, indicating a problem with the bleed air system. The issue couldn’t be ignored but it wasn’t dire. “You follow the steps in the checklist and the plane should almost fix itself,” Jubb said.

But before Jubb could fix the problem, another warning went off — one he had never seen — “saying that the ramp was open while we were in pressurized flight,” he said.

From the back of the plane, Brink and Pike saw the ramp door locks retracting. There was a hydraulic leak. They checked to make sure passengers were seated and buckled in and began emergency procedures.

Pike climbed on a pallet to try to refill the system with a pump, but hydraulic fluid was depleting quicker than it could be added, Brink said.

“We tried everything,” Pike said.

The problem, they would later find out, was a malfunction of a component called the actuator, a mechanical device used to control the movement of the aircraft ramp door.

An instant loss of pressure and total loss of hydraulic fluid resulted, according to a maintainer at Ramstein, who said he had never seen such a failure in 23 years working around C-130 aircraft.

Realizing they would not be able to get the ramp shut, the crew quickly had to decide whether they should turn around or continue to Bamako.

Turning back, though closer, had its own set of problems. It was getting dark and the airfield they departed from was designated for day-use only. It was also in the middle of nowhere, with limited servicing options to fix the aircraft.

But did the aircraft have enough fuel to fly to Bamako with an open ramp?

The aircraft would have to fly lower — 9,000 feet instead of 20,000 feet, since the cabin was now unpressurized — and slower because of the added drag. Both factors meant the plane would burn more fuel.

Determining they had enough fuel, the crew decided to stick with their original flight plan.

They settled into a comfortable airspeed, about 190 knots, one that “wasn’t terribly loud,” Jubb said.

But the biggest challenge lay ahead: the landing.

“There’s nothing in our checklist that says, ‘If this happens, this is what you do,’ ” Jubb said, “so there was no guidance.”

The crew, Hoxie said, was concerned about the fuselage hitting the runway during the landing flare when the nose of the plane is raised just before touchdown. That could possibly damage the plane or start a fire with highly flammable hydraulic fluid, he said.

“When the cargo ramp fell to the horizontal position, it effectively ‘stretched’ the aircraft again, further limiting our clearance between the fuselage and runway,” Hoxie said.

Hoxie and Jubb decided on a full-flap landing, which would get the weight on the wheels quickly and reduce the length of the landing roll.

“We wanted to land flat so we didn’t strike the tail,” Jubb said.

They were able to bounce their ideas off their leadership at Ramstein, whom they communicated with via satellite radio.

From Ramstein, additional experts were called on to weigh in, including an engineer from Lockheed Martin, the company that produces the C-130J.

The Lockheed representative agreed with the pilots’ plan, suggesting only that the aircraft not go more than two degrees above the horizon as it touched down.

“The plan we came up with was to land at our highest possible landing speed while using full flaps,” Hoxie said. “We limited ourselves to raising the nose only two degrees when we flared the aircraft just before touching down.”

“I think they had every firetruck on the field waiting for us,” Jubb said. “All of the base leadership from the French side and the U.S. side were there. They didn’t know what to expect.”

“In the end, it was a completely uneventful landing, no damage to the aircraft and no one got hurt,” Hoxie said.

“It was one of the best landings I’ve seen,” Jubb added.

“We found out later it had never been done,” Jubb said of landing a C-130J with the ramp down.

The flight took just over three hours — about an hour more than originally scheduled — and the Ramstein airmen accomplished their mission.

“The passengers got off the plane and there was an Air France flight waiting there to take them home,” Jubb said.

Brink said none of the crew panicked.

“You don’t have time to be scared for yourself,” he said. “You have to focus on getting 80 people home to their families.”