‘We’ve grown up in the firefight; we’re not scared of bullets’ 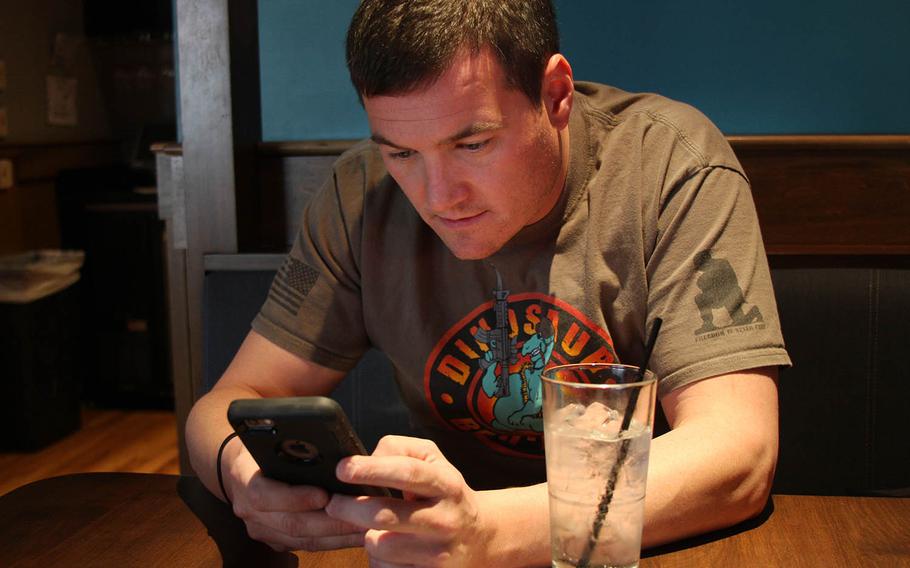 Matt Zeller, a former U.S. soldier, credits former interpreter Janis Shinwari with saving his life. Zeller and Shinwari created the non-profit No One Left Behind to help other former Afghan and Iraqi interpreters. (Heath Druzin/Stars and Stripes)

Matt Zeller, a former U.S. soldier, credits former interpreter Janis Shinwari with saving his life. Zeller and Shinwari created the non-profit No One Left Behind to help other former Afghan and Iraqi interpreters. (Heath Druzin/Stars and Stripes) 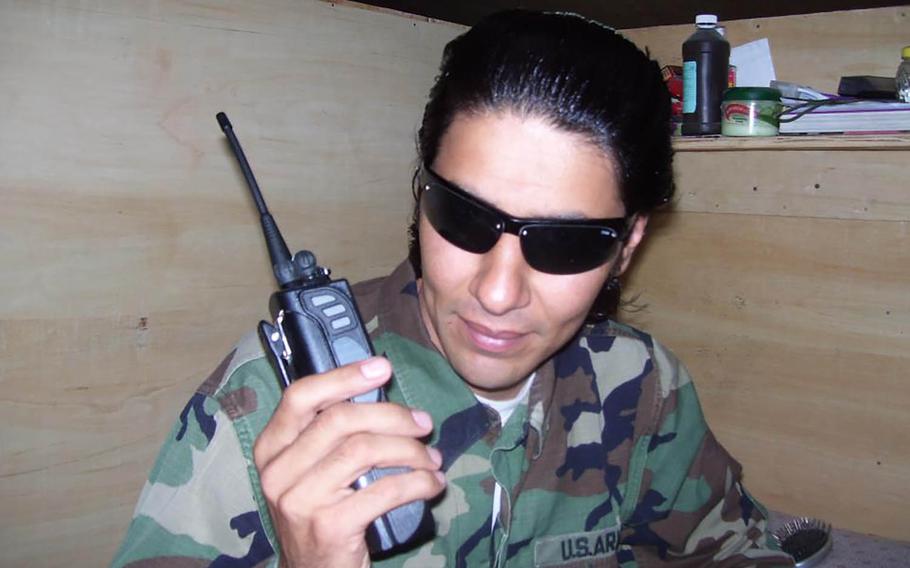 Afghan interpreter Janis Shinwari worked with U.S. troops in Afghanistan for seven years. He now lives in Virginia and works to help other interpreters settle in America. (Courtesy of Janis Shinwari) 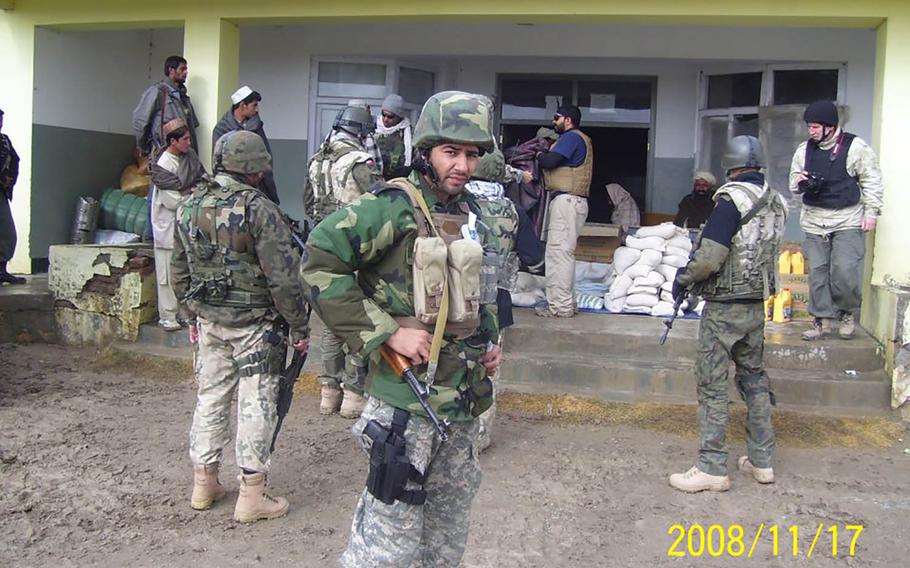 Janis Shinwari on patrol with U.S. forces. Shinwari was an interpreter for the U.S. military in Afghanistan for seven years before immigrating to America in 2013 due to Taliban threats. (Courtesy of Janis Shinwari) 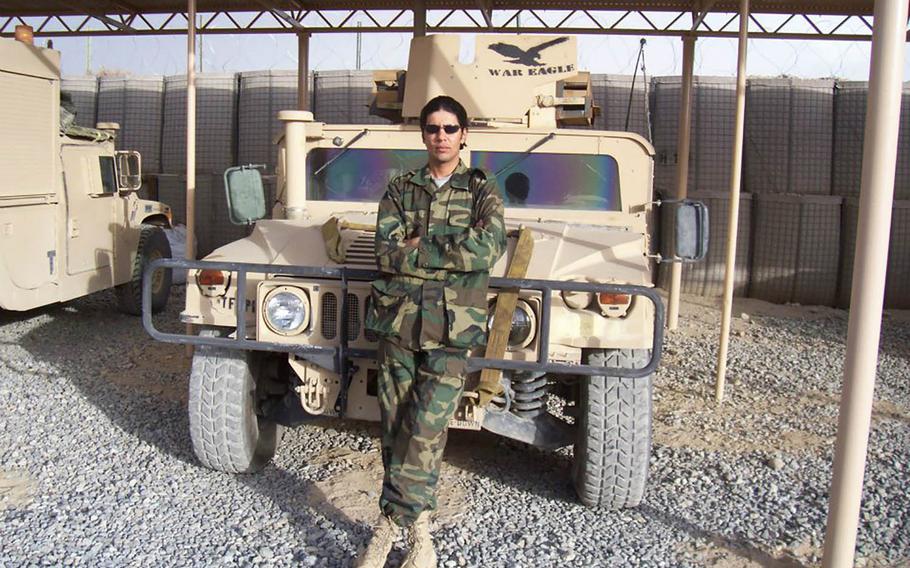 Janis Shinwari leans against a humvee at a U.S. base in Afghanistan while working as an interpreter for the U.S. military. Shinwari, who now lives in Virginia, and former U.S. Army officer Matt Zeller formed the nonprofit No One Left Behind to help former Afghan and Iraqi interpreters. (Courtesy of Janis Shinwari)

He had shaken his hand and introduced himself 10 days earlier, but that was the extent of their interaction.

Now Shinwari was watching as two insurgents crawled toward the soldier amid rifle fire in the Taliban stronghold of Ghazni province. He knew the stranger would be killed right in front of him if no one acted.

Shinwari was an Afghan interpreter for U.S. forces so well trusted that he carried a Kalashnikov rifle when he went on patrol with American troops. It was 2008 and he had been in his dangerous line of work for two years, traveling through some of Afghanistan’s diciest regions.

Ten days earlier, a new unit arrived at Forward Operating Base Ghazni, and the fresh soldiers were still getting their bearings when a patrol got lost and hit a roadside bomb. Shinwari was in the base’s tactical operations center when the stranded unit called for help.

A major told Shinwari to grab his body armor and rifle and go with the rescue party. A few minutes after leaving the base, a new distress call crackled over the radio — Taliban fighters had ambushed the stranded unit.

“I was hearing gunshots and screaming on the radio and I thought, ‘Oh, this sounds bad,’ ” Shinwari said.

When he arrived on the scene of the ambush, he noticed the pinned-down soldier, Capt. Matt Zeller, who had been separated from his platoon after a mortar fell near their position.

Zeller’s platoon mates were firing at Taliban positions, trying to keep them away from their comrade, but the two insurgents were closing in fast and Zeller had no idea. The gunfire coming from behind a stand of trees was so intense that it sounded like a bag of popcorn on a stove, Shinwari recalled.

He turned to an American soldier and told him to lay down covering fire so Shinwari could run to Zeller and rescue him. The soldier asked if he was sure he wanted to do that.

“We’ve grown up in the firefight; we’re not scared of bullets,” Shinwari said while recalling that day.

Shinwari was concerned about Zeller mistaking him for an insurgent and accidentally shooting him so he knew he had to act fast. He ran toward Zeller and when he got close enough he shot and killed both insurgents who were sneaking up on the position and in one motion hurled himself at Zeller, knocking him to the ground.

Shinwari hatched a plan: one would run while the other concentrated fire on the Taliban positions. They did that, alternating until they reached the other soldiers, both coming out unscathed.

“I’m sitting here talking to you right now because my translator saved my life,” Zeller said.

Shinwari and Zeller formed a tight bond, hanging out in each other’s rooms, drinking green tea, listening to music and learning about where each came from. They kept in touch after Zeller returned to the U.S. and left the military. Shinwari continued translating until the death threats became too much.

His killing of the two insurgent fighters had put him at the top of a local Taliban hit list. He had generally worked with his face uncovered, and those making the threats knew who he was, even circulated a photo of him around the villages where he had worked. Shinwari applied for and received a Special Immigrant Visa, created to give Iraqi and Afghan interpreters under threat safe passage to the United States.

When Shinwari arrived at Dulles Airport in Virginia in 2013 with his wife and two young children, Zeller was there to meet him. After they hugged, Zeller said, “OK, let’s get the rest of your luggage,” and Shinwari pointed to the small rollaway suitcase each family member had and told him that was all they were allowed to bring. Like most former interpreters who get Special Immigrant Visas, he had arrived in America with no job, no housing and no car.

“It was at this moment I realized that this guy just showed up with the clothes on his back,” Zeller said. “I realized he’s going to be homeless if I don’t do something.”

Zeller, now 33, was shocked that there was nothing in place to help people like Shinwari. He started a GoFundMe campaign that night to help his friend get settled, and was astonished to quickly raise $35,000, mostly from strangers, money he thought would help Shinwari and his family get settled, pay a deposit on an apartment and buy a car.

But Shinwari, now 35, said the funds should go to help all of the other interpreters who were still stuck in Afghanistan or recently arrived.

“He said, ‘Brother, I can’t take this money,’ ” Zeller recalled.

So Zeller and Shinwari started No One Left Behind, which has now helped nearly 1,000 translators and family members settle in the U.S. and operates across the Washington metro area, with chapters in San Francisco, upstate New York, Boston and Chicago. Dozens of volunteers make deliveries of clothes and furniture to newly arrived interpreters, help them find jobs, apartments and English lessons for any family members who don’t speak the language.

Shinwari now works as an inventory manager at an electronics company in Alexandria, Va., but spends much of his free time finding homes and jobs for fellow translators and organizing donation pickups and dropoffs across Washington, Virginia and Maryland. He says it’s the least he can do to repay the kindness he encountered when he arrived in the United States.

“Now we are safe and we are here to help other translators,” he said. “That’s why we built this organization.”