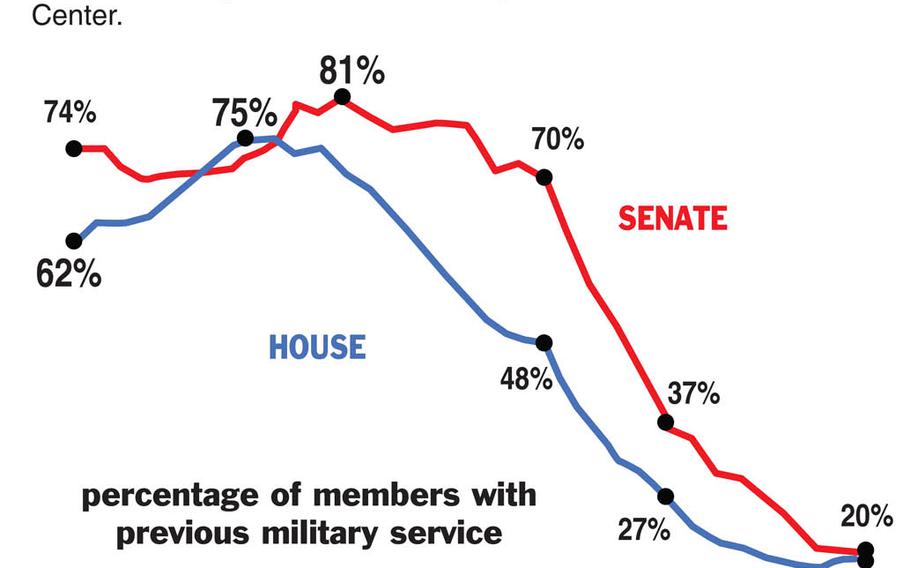 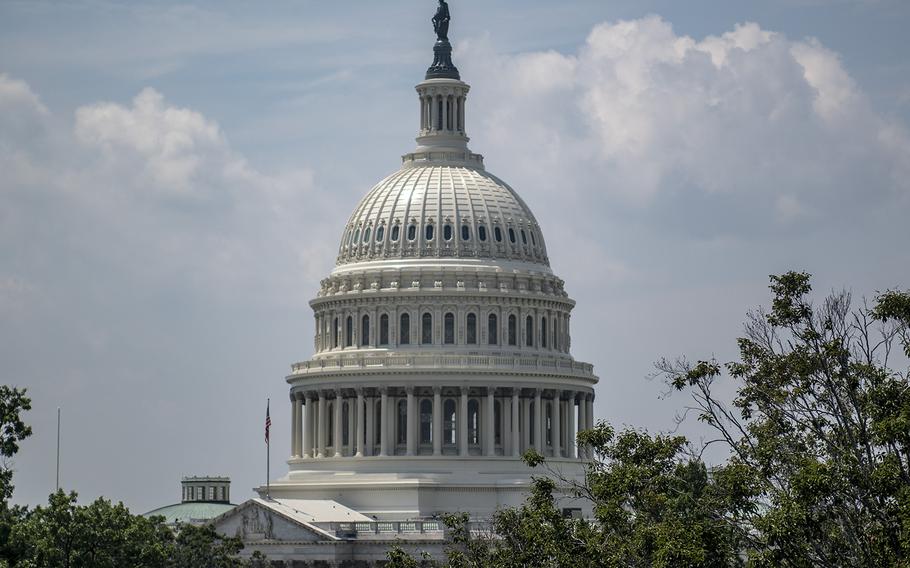 More than 400 veterans ran in midterm primary races throughout the country this year, said Ellen Zeng, a spokeswoman for With Honor, a new “cross-partisan” group focused on electing candidates with military service to public office.

Now, 200 military veterans are vying to win seats in the House or the Senate on Tuesday, she said.

“We’re hopeful that there will be elected leaders who have a common bond based on their military service and willing to work across the aisle to fix Congress,” said Zeng, who is also political director for the Charlotte, N.C.-based group launched last year. “They are running in districts that are hard to win, but it’s inspiring to see so many veterans wanting to serve again.”

Veterans are running in some high-profile races — some of them in re-election bids and others for the first time. More so, while some veterans are part of a traditional Republican bloc of candidates, others are running as Democrats, trying to build on prior successful campaigns such as that of Sen. Tammy Duckworth, D-Ill., a veteran Army helicopter pilot.

All 435 seats in the House and 35 of the Senate’s 100 seats are up for grabs in Tuesday’s elections.

The races include incumbents such as Reps. Mike Gallagher, R-Wis., and Ted Lieu, D-Calif., who have made their marks in short tenures in Congress. Others, such as Democrats Amy McGrath of Kentucky and Randy “Ironstache” Bryce of Wisconsin are drawing national buzz as they chase first terms as House lawmakers.

“We have seen an upswell of veterans running for public office,” said Nick Armstrong, a veteran and senior director for research at the Institute for Veterans and Military Families at Syracuse University. “That is definitely a positive sign for veterans.”

The decline in the number of veterans serving in Congress is a reflection of fewer folks serving in the military now, especially when compared with the draft years and the Vietnam War, Armstrong said.

Less vets, more partisanship Some pundits contend the dwindling ranks have contributed to the toxic partisanship that has taken over Capitol Hill and politics across the country.

President Donald Trump’s growing demands for the military, from expansions in overseas war operations, to surprise efforts to install sizable budget cuts, to new plans to deploy about 15,000 troops to the border, have sharpened the partisan divide, Helmer said.

Now, the hope is that a wave of new vets in Washington could inject the lower and upper chambers with a much-needed spirit of bipartisanship, Zeng said. The lack of veterans' voices in Congress promoting bipartisanship and the military has become more pronounced following the August death of outspoken Arizona Republican Sen. John McCain.

Now, it’s time for a new generation of military leaders to rise up, some supporters said.

“Washington is so broken and gridlocked and what we are trying to do is get a new generation of leaders who are principled who can reverse this polarization,” Zeng said. “I think that the wave, as we see it, are veterans who have chosen to run.”

Of the 200 candidates tracked by With Honor, 61 are Democrats, 102 are Republicans and the remainder are third-party or active write-in candidates, Zeng said.

Lawmakers will be facing a long to-do list for defense matters when a new Congress convenes in January. The fate of an ongoing military buildup, war and deployment oversight and decisions on who can enlist will be directed by lawmakers in Washington for the coming two years.

That comes as Pentagon officials are slated in January to roll out two proposed fiscal year 2020 budgets: a $733 billion plan that would stay on track with a military expansion and a $700 billion plan that would undo much of its initiatives from the past two years. Lawmakers also will contend with budget caps that otherwise would keep defense spending to $576 billion for the 2020 fiscal year.

The new Congress also might have to contend with several costly Trump plans to deploy thousands of troops to the U.S.-Mexico border, to create a “Space Force” as a new military service and to hold a military parade through the streets of Washington that was put on hold until 2019. There’s also ongoing debate over whether transgender personnel and certain immigrants should be eligible to serve in the military.

Recent polls show there could be a shift of control of the House from Republican to Democratic, and in a less likely case, the Senate.

But Dan Helmer, vice chair of the progressive political organization VoteVets, said he sees a different kind of possible change. He sees veterans running for office as Democrats because they are tired of watching Trump ride roughshod over the services.

“They are running for seats and going to win seats previously held by Republicans because this president and this Republican Congress has been terrible for the military and veterans,” said Helmer, whose group has endorsed a slate of mostly Democratic military veteran candidates in this year’s midterms. “This Blue Wave that is about to happen is going to be colored in camouflage.”

Military veterans make their mark, seek re-election Several military veterans running for re-election in the midterms have been especially vocal on the role of the military in their short tenures on Capitol Hill. In some cases, those incumbents easily could walk into new terms for their districts with Tuesday’s elections.

Rep. Conor Lamb, D-Pa., is running for re-election with only months in Congress after he bested opponent Rick Saccone in a close March special election. Lamb won the race for the state’s 18th Congressional District, a traditionally Republican stronghold, by less than 700 votes.

Now, Lamb is running in the state’s newly redrawn 17th Congressional District against sitting Republican Keith Rothfus, who has represented the state’s 12th District since 2013.

“We are seeing Democratic veterans winning swing districts,” said Helmer, whose organization has been working on the issue since its 2006 launch. “This new crop of veterans are going to have lawmakers to look up to. That’s why we are seeing a wave of veterans running at the highest levels, they see role models.”

Reps. Tulsi Gabbard, D-Hawaii, and Adam Kinzinger, R-Ill., are seeking fourth terms. Both, along with Moulton, are rumored as potential presidential candidates one day.

Including Nelson and Moulton, at least three other incumbents are facing challenges from other veterans.

Zeng said the numbers show there are overwhelmingly more Republican veterans in Congress than Democratic ones, though the gap could tighten this year.

“We will see that get closer together,” she said.

But some veterans are facing tough battles.

For example, in the race to replace outgoing Republican Sen. Jeff Flake in Arizona, Republican Rep. Martha McSally, an Air Force veteran, is trailing her opponent, Democratic Rep. Kyrsten Sinema, in recent polls. Late Thursday, Green candidate Angela Green dropped out of the race and threw her support behind Sinema.

In another controversial race, incumbent Rep. Duncan Hunter, R-Calif., a Marine veteran who is now facing 60 federal charges for claims of misusing $250,000 in campaign funds, is running for re-election to a sixth term. Hunter, who won his seat in 2009 after his father retired from it, has pleaded not guilty, along with his wife, who also was charged. However, his lead for California’s 50th Congressional District against opponent Ammar Campa-Najjar has narrowed to 1 perpoint in one local, recent poll.

Helmer said Hunter is the perfect example of why not all veterans deserve his group’s endorsement.

“We don’t think any veteran should be in Congress,” Helmer said. “We look at guys like Duncan Hunter and we see them undermining the future of the country. This is not about getting any veteran elected.”

Female vets for Congress draw buzz In Kentucky’s 6th Congress District, McGrath’s political story, like that of her military career, has been one of defeating the odds.

McGrath defeated Gray and is now battling to unseat her opponent, Republican Congressman Andy Barr, who is seeking a fourth term in office.

“Our polling has showed Amy with a consistent, but small, lead in our last 5 polls,” McGrath’s campaign manager Mark Nickolas.

In New Jersey’s 11th Congressional District, veteran Navy helicopter pilot Mikie Sherill, a Democrat, has a healthy lead in some polls over her opponent, Jay Webber, a Republican state assemblyman.

The two are vying to fill the seat being vacated by retiring Republican Rep. Rodney Frelinghuysen, who said in January that his 12th term would be his last.

McGrath, Sherill and other female military veterans running for office are part of a new, energizing movement, Helmer said. They are also willing to stand up for women at a time when it feels like they are under attack by Trump and his administration, he added.

“These amazing women leaders are part of the changing face of the military who have attracted attention because of their willingness to shatter every ceiling first in the military and then in politics,” Helmer said. “These strong women military leaders have captured the attention of the whole country and it’s not a surprise.”

Military veterans make strong showings in runs for first terms In a tight race in New Hampshire’s 1st Congressional District, where Navy veteran Eddie Edwards is running as a Republican, it’s not clear who has the edge. Edwards, a former police chief, is facing off against state lawmaker Andy Sanborn.

The district in 2016 elected a Democratic lawmaker and Trump as president.

Still, Edwards drew With Honor’s endorsement, which aligns itself with candidates who pledge to work in a bipartisan fashion.

“We endorse candidates based on a number of factors … more importantly, it comes down to values,” Zeng said of Edwards and others, who constitute 20 Republicans and 19 Democrats endorsed by the group. “It’s really about character and value, and so that’s something that counts in terms of whether we endorse or not endorse.”

In the Houston area, Dan Crenshaw, a former Navy SEAL also endorsed by With Honor, is running as a Republican in the state’s 2nd Congressional District. The seat’s current holder, Republican Rep. Ted Poe, 70, announced his retirement in November.

Crenshaw beat eight other candidates to reach a primary run-off in May, when he handily beat state Rep. Kevin Roberts. He’s now facing off against Todd Litton, a former director of education nonprofits who has championed preschool education.

In Wisconsin’s 1st district, Bryce, who is supported by VoteVets, is waging a tough fight as the Democratic candidate vying to replace departing Republican House Speaker Paul Ryan. Bryce, an Army veteran and union ironworker, has faced an uphill battle against opponent Bryan Steil.

Most political analysis groups rate the Wisconsin district as likely or leaning Republican, but polls predicting the lead in the race have varied greatly.

If candidates such as Bryce and other veterans pull surprise upsets, in addition to new candidates and incumbents who easily could win election, the moves could bode well for Congress next year, said Armstrong, the Syracuse director.

“Veterans tend to reach across the aisle more than nonveterans,” Armstrong said. “Veterans demonstrate higher levels of civic engagement, they are more likely to vote, engage with public officials, attend public meetings, and work with their neighbors than your average American. It is no surprise to see veterans want to continue this service. And in a time when we are deeply divided and polarized, it’s a good sign for the country that folks are willing to continue to serve in that way.”