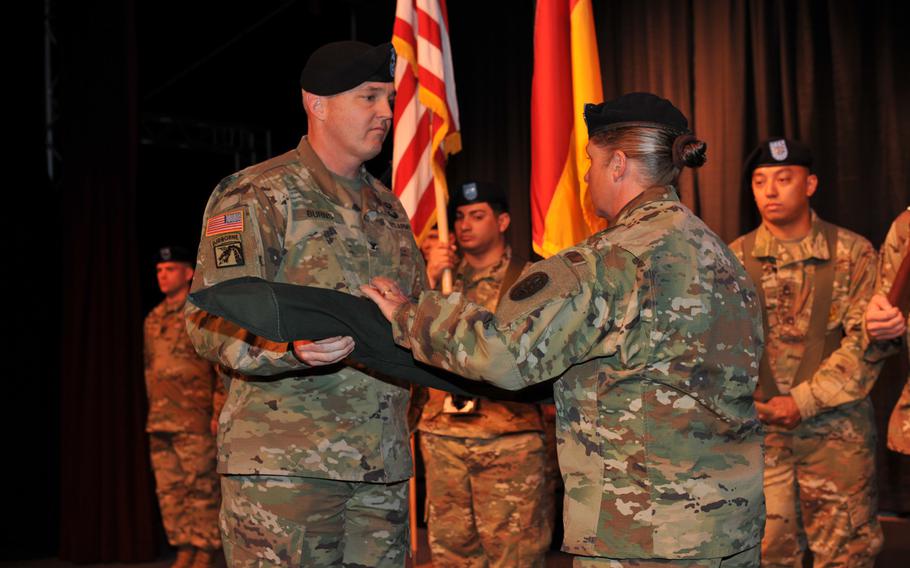 Wounded soldiers leaving the Army from Europe will no longer be assigned to the Warrior Transition Battalion, which was inactivated during a ceremony Thursday at Kleber Kaserne in Kaiserslautern, Germany.

The responsibility to get wounded or sick troops back to the States now falls to the Warrior Transition Office. And instead of those soldiers being assigned to the battalion-level unit, they will remain with their parent units during the process.

The WTO actually took over the processing of soldiers on March 1, according to European Regional Medical Command. Since then, some 20 servicemembers have been processed using the new system.

Since the end of the combat missions in Afghanistan and Iraq, the Army has moved to shut down a large number of its warrior transition units. Many WTUs, especially at smaller bases, saw the number of troops coming through fall off sharply in recent years.

During the height of its mission, Warrior Transition Battalion-Europe was in service on 14 bases, according a Regional Health Command Europe press release. But over the past 18 months, smaller WTB units in places like Vilseck, Baumholder and Stuttgart, have been combined in Kaiserslautern.

Consolidating in Kaiserslautern, a community that includes Landstuhl Regional Medical Center, was an “obvious choice,” the health command said in June 2015.

In addition to its responsibilities in Europe, the WTO will oversee transitioning servicemembers assigned to U.S. Africa Command and U.S. Central Command.

Its goal is to either rehabilitate its members, enabling them to return to active duty, or to assist with a transition to civilian life.