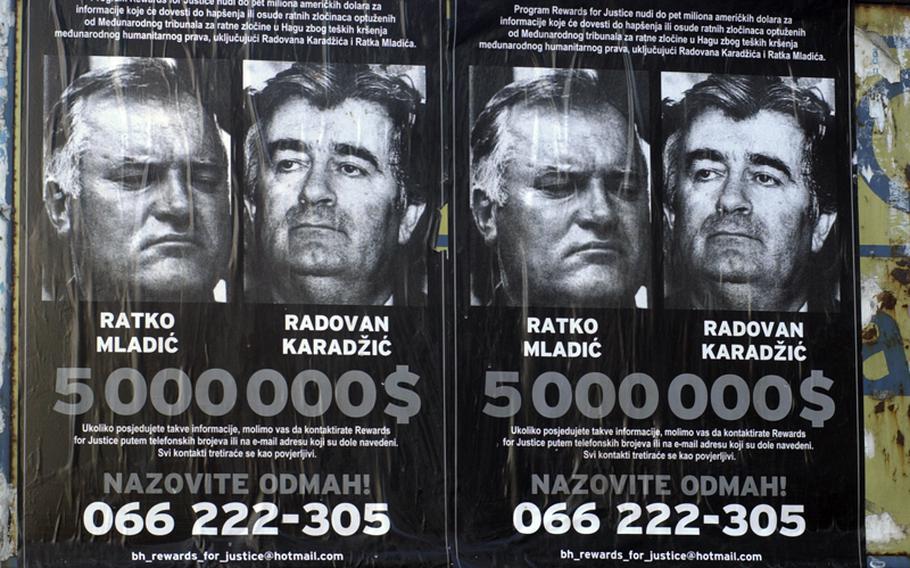 Buy Photo
The images of Bosnian Serb Gen. Ratko Mladic and Bosnian Serb leader Radovan Karadzic appear on a wanted poster calling for their arrests for war crimes committed during the four-year war in Bosnia. (Terry Boyd, Stars and Stripes )

Europe's No. 1 most-wanted war crimes suspect, Gen. Ratko Mladic, has been arrested in Serbia after being on the run since 1995, The Associated Press reported.

Mladic was indicted by the U.N. war crimes tribunal in The Hague, Netherlands, for genocide in the slaughter of some 8,000 Bosnian Muslims in Srebrenica and other crimes committed during Bosnia's 1992-95 war.

Mladic led troops in the onslaught against the U.N.-protected enclave of Srebrenica in an enclave supposedly protected by U.N. peacekeepers, the AP reported. Thousands of Muslim men and boys were killed there, the report said.

While tensions within Bosnia and Herzegovina will remain, one of the important results of Mladic&rsquo;s capture is Serbia&rsquo;s relationship with both the United States and the European Union will improve, said retired Army Maj. Gen. Bill Nash, who led the 1st Armored Division during the first deployments to Bosnia in the 1990s.

&ldquo;As that improves, it will become more obvious to the Bosnians both Serb and Bosniak and Croat that they need to develop compatible policies,&rdquo; Nash told Stars and Stripes.

Nash stressed that it is important for the United States and European Union to support Serbian President Boris Tadic, who took a political risk in capturing Mladic.

&ldquo;There&rsquo;s no doubt that there&rsquo;s a constituency within Serbia that is supportive of Mladic,&rdquo; he said. &ldquo;We need to help Tadic make clear to his citizenry that the right thing was done.&rdquo;

Read the latest on the arrest and trial of Gen. Ratko Mladic from The Associated Press