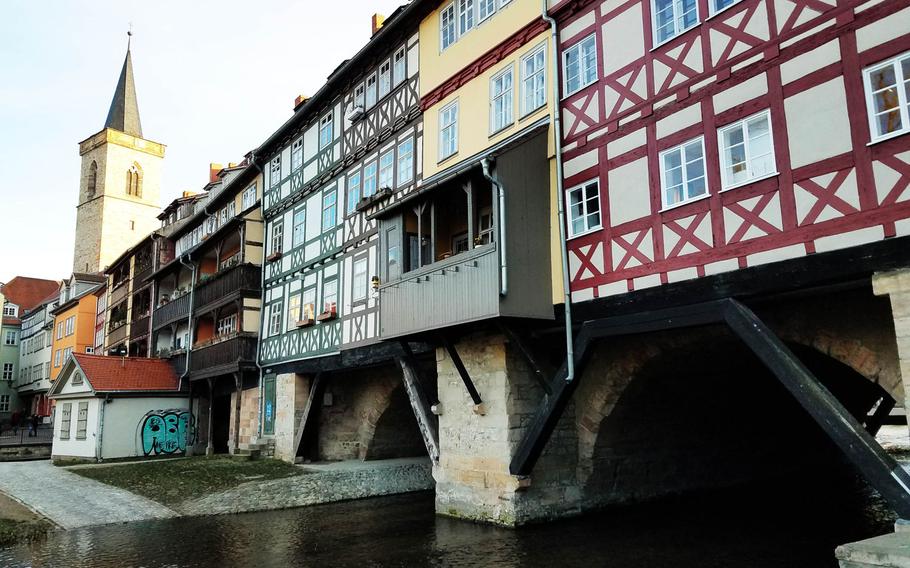 Buy Photo
The Merchant's Bridge in Erfurt lined with houses and shops. The bridge is one of the last inhabited bridges left in the world. (Martin Egnash/Stars and Stripes)

Buy Photo
The Merchant's Bridge in Erfurt lined with houses and shops. The bridge is one of the last inhabited bridges left in the world. (Martin Egnash/Stars and Stripes) 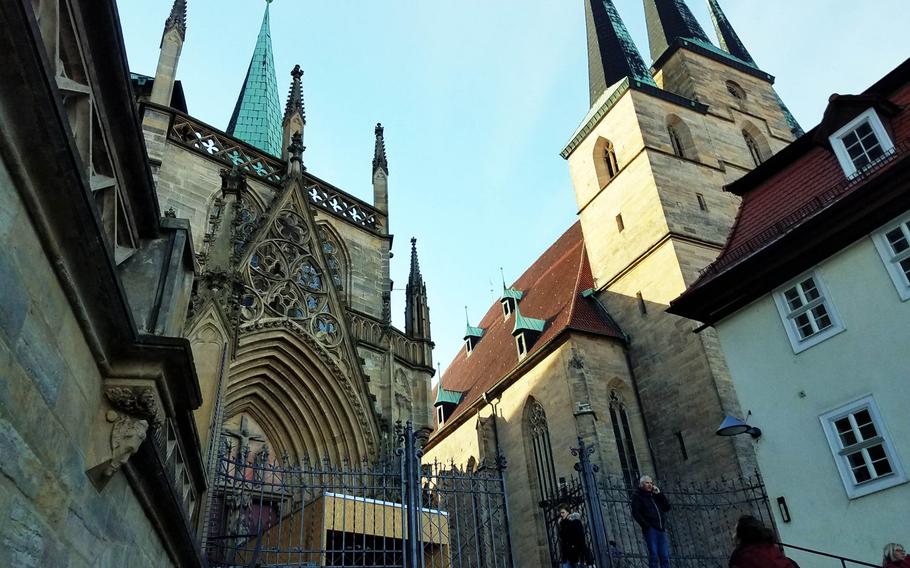 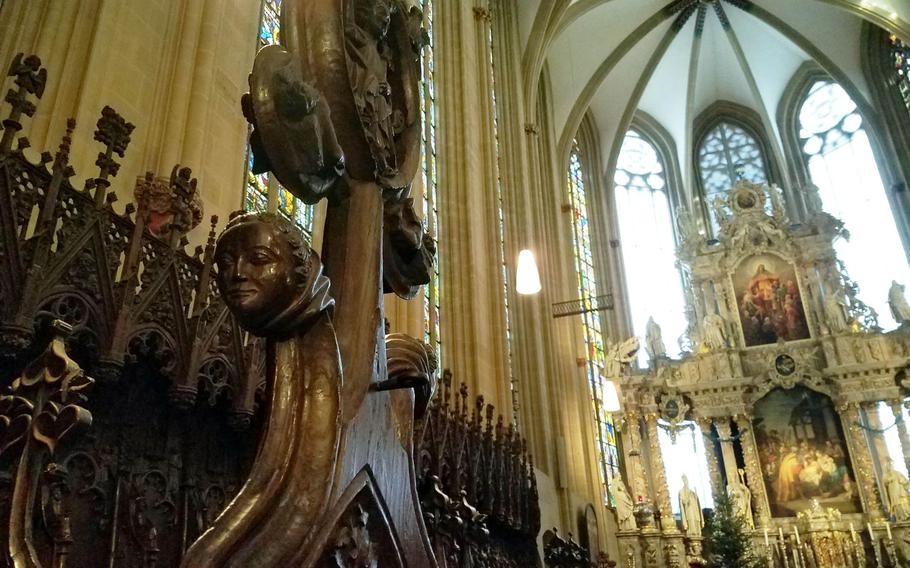 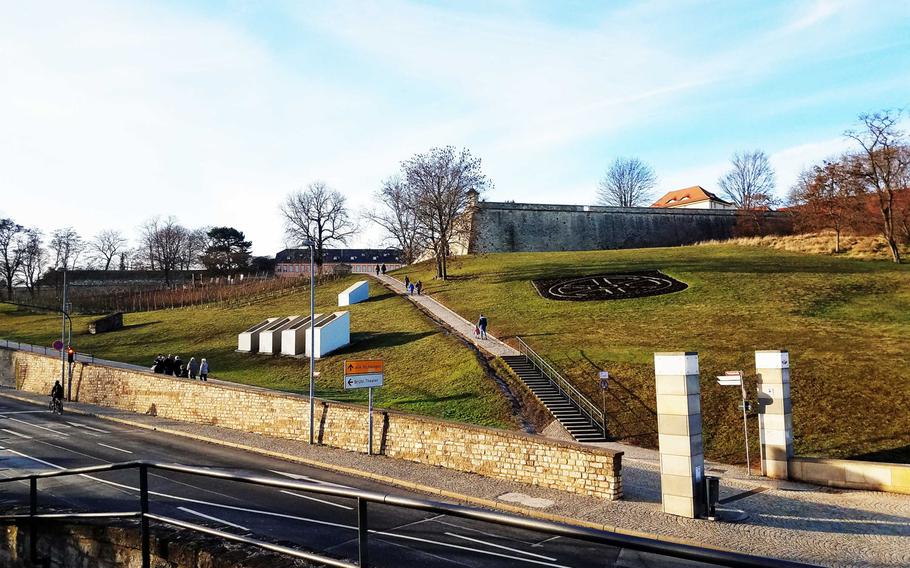 Buy Photo
The entrance to the Petersburg Citadel in Erfurt, Germany. (Martin Egnash/Stars and Stripes) 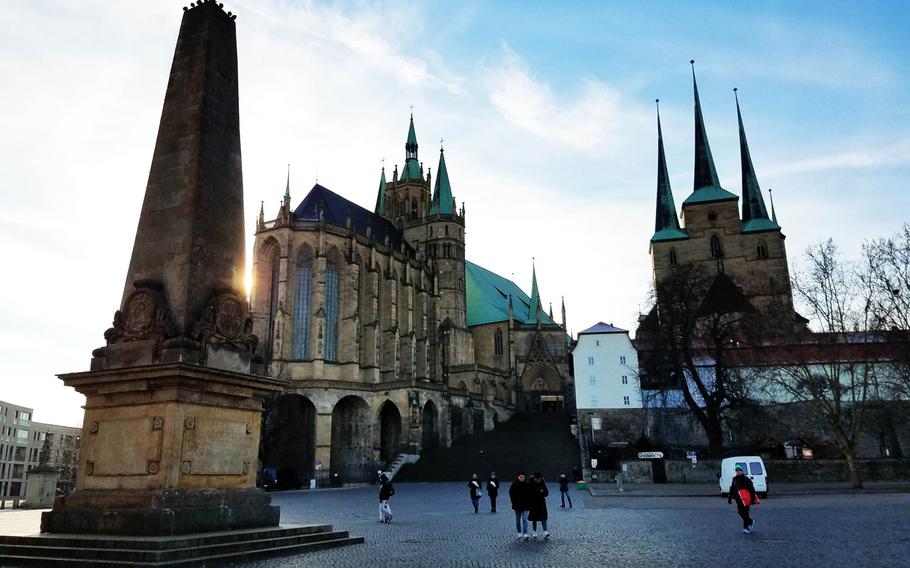 Erfurt, a relatively undiscovered (by Americans) gem, is one of the best-preserved medieval city centers in Germany and is located only a few hours’ drive north of U.S. Army Garrison Bavaria.

Erfurt is the capital of the Thuringia region of Germany, which is seldom visited by servicemembers, compared to the often- and over-visited Bavaria.

Thuringia itself is a beautiful area with vast forests. But Erfurt is really the gem of the region.

The city owes much of its lore to its university, the oldest in Germany. The university’s most famous student, Martin Luther, who later lived in the city’s St. Augustine Monastery, went on to start the Protestant Reformation.

Erfurt Cathedral, also known as St. Mary’s Cathedral, dominates the main town square. It is where Luther was ordained. The outside is a very pretty cluster of gothic spires on top of a small hill, while the inside is strewn with relics and treasures, like the largest medieval bell in the world and a bronze candelabra, named Wolfram, which is the oldest free-standing cast work in Germany.

If history isn’t your thing, then note this: It’s very pretty, too.

The cathedral is next door to the St. Severus Church, which is adorned with walls of stained glass.

The little hill the two churches sit on overlooks a beautiful town square with old buildings, Thuringian restaurants and coffee shops. The buildings on the square are all unique, and some feature intricate details like suits of armor carved atop windows or elaborate paintings on the walls.

Nearby is the Petersberg Citadel, one of the largest and best-preserved town fortresses in Europe, which has several museums and a great view over the town.

A little tip: Hidden around one of the defensive walls is a swing set, where you can swing over the city while taking in the scenic views.

Another famous site in Erfurt is the Merchant’s Bridge. This cobblestone pedestrian bridge is one of the few bridges left in the world that have inhabited buildings on it. About 80 people still live in the houses on it, in between the bakeries and shops.

The bridge, which dates to 1325, is lined with picturesque half-timbered shops that sell artisanal goods, bread and specialty foods in addition to some bars and restaurants. If you take a seat in one of them, you will most likely get treated to a fantastic view over the Breitsrom, a branch of the Gera River.

Erfurt can’t be reduced to merely one or two megasites. It’s mostly about the atmosphere. The real tourist joys are found by walking the old streets, admiring the hundreds-of-years-old structures and just getting into the medieval spirit of the place.