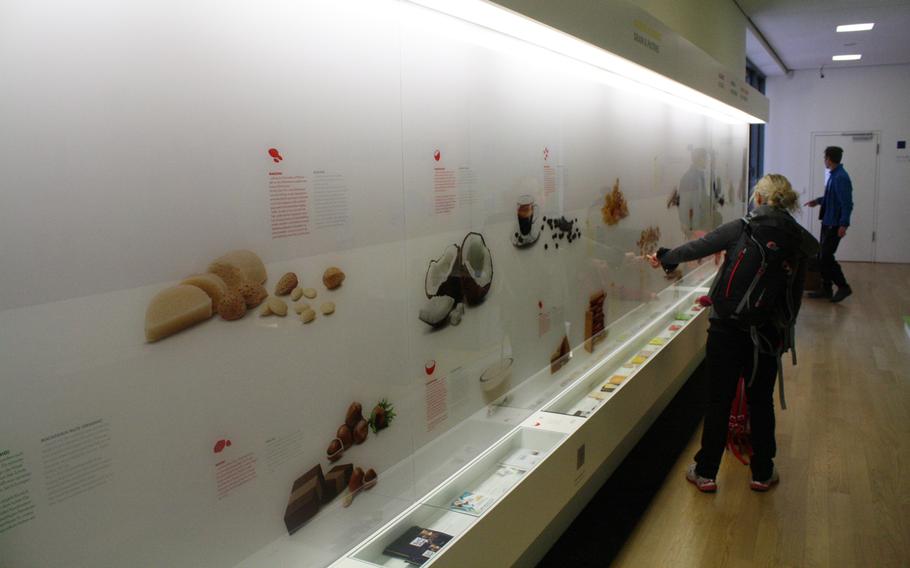 Buy Photo
At the Ritter Museum, a series of panels provides a window into the art of chocolate-making. The company has been in the chocolate-making business for 100 years. (John Vandiver/Stars and Stripes)

Buy Photo
At the Ritter Museum, a series of panels provides a window into the art of chocolate-making. The company has been in the chocolate-making business for 100 years. (John Vandiver/Stars and Stripes) 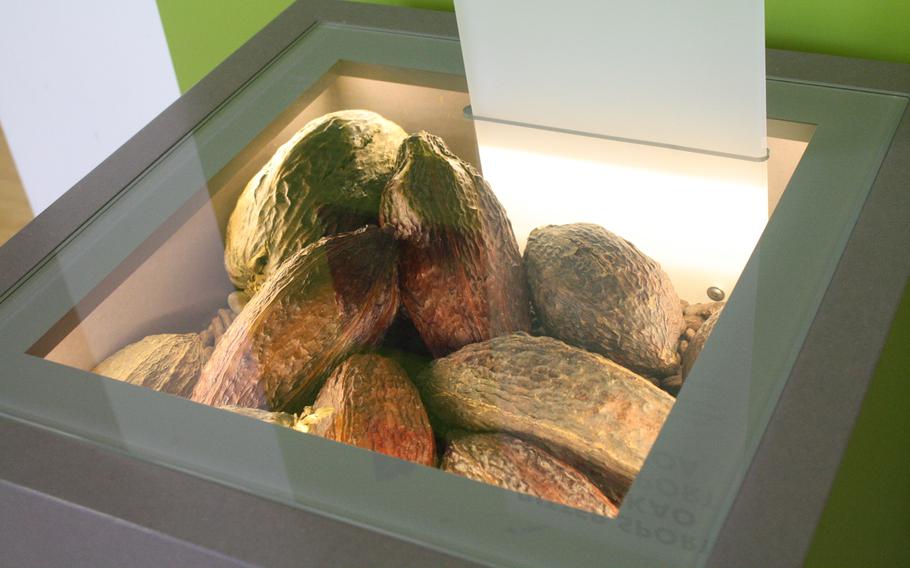 Buy Photo
Cacao pods filled with beans are displayed in the Ritter museum near Stuttgart, Germany. You also can sample what a plain, freshly picked seed tastes like before the sweetening process. (John Vandiver/Stars and Stripes) 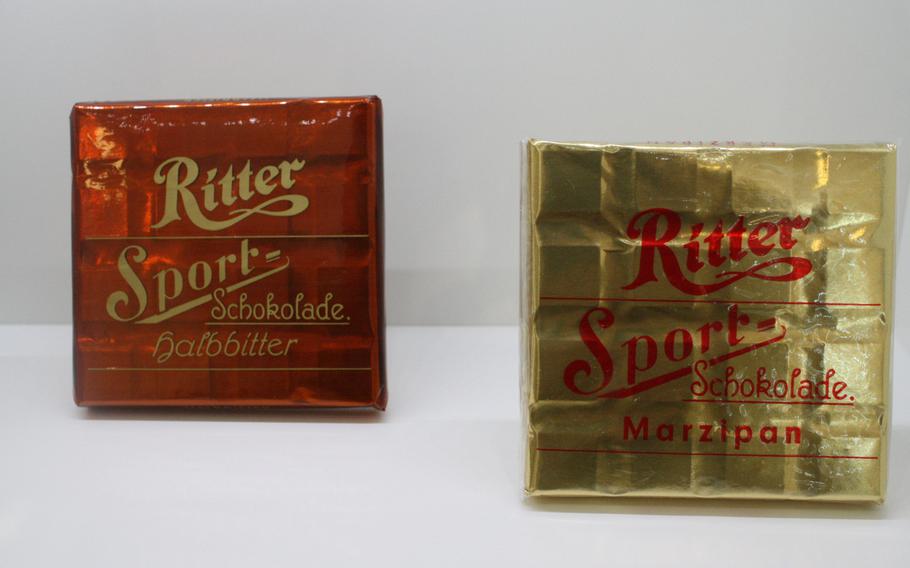 Buy Photo
Ritter Sport, famous for its square-shaped chocolate, began producing the square packages in the 1930s. These packages are from around the late 1940s. (John Vandiver/Stars and Stripes) 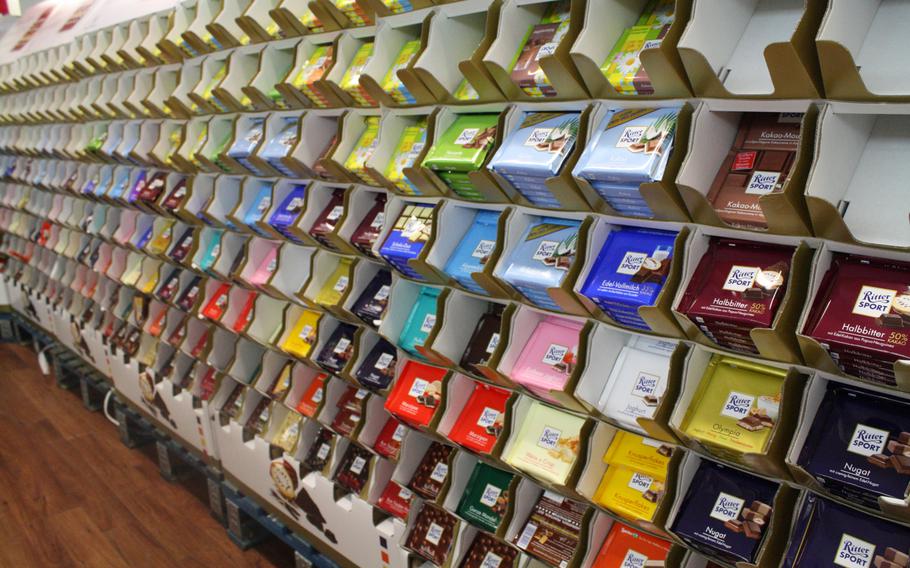 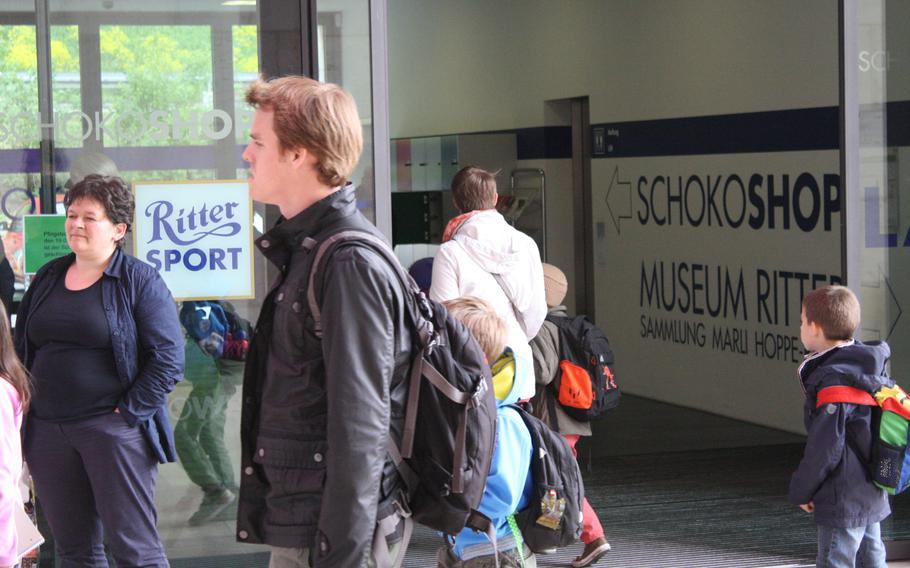 Buy Photo
During a visit to the museum, expect to encounter lots of children. The Ritter Sport headquarters near Stuttgart, Germany, is a popular school field trip destination. (John Vandiver/Stars and Stripes)

I’ve always been a big fan of Ritter Sport chocolate, the conveniently packaged square-shaped sweet that comes in so handy when you’re on the run.

As it turns out, that was the whole idea.

During a recent visit to Ritter Sport headquarters in Waldenbuch, Germany, a small suburban town just outside of Stuttgart, I learned all about the world-famous candy that has been around for 100 years.

With a small museum dedicated to the history of the brand on site, a visit to the home of Ritter Sport offers a chance to learn the story of a great company while getting smart on how the bitter cocoa bean is transformed into civilization’s most beloved treat: chocolate.

The Ritter Museum is simple in design. It begins with a model cocoa tree, which is where everything starts.

Ritter pulls cocoa from the obvious places: Africa and Central and South America, the hubs for cultivation. But no two beans are alike. Some are mild, some strong. Some are of average quality while others are much coveted by chocolate producers. Only about 5 percent of cacao harvested worldwide counts as so-called “fine cacao.” Ecuador, Colombia and Madagascar are among the producers. But the world leader is Papua New Guinea, which produces 90 percent of the world’s fine cacao, according to the museum.

Meanwhile, California is Ritter’s place of choice for the almonds used in certain blends. Turkey is tops for hazelnuts.

It was early in the company’s history — in 1932 — that Clara Ritter came up with the idea for the iconic square shape for Ritter’s chocolate, rather than the more traditional bar form. Her inspiration for the unusual packaging shape was the enthusiasm many of her customers had for athletics and their need for an energy boost on their way to the nearby sporting grounds.

By 1964, everything the company sold came in square form, setting itself apart in an increasingly competitive market.

Soon after that, Ritter’s unique wrapper was developed. I’ve always found strange enjoyment in the simple pleasure of opening their chocolate — that practical downward snap that cracks the wrapper open. No peeling required.

Over the years the company continued to add flavors, keeping up with the times.

But perhaps the best part of a visit to Ritter is stopping at the candy shop, where you can find every flavor imaginable. It’s impossible to walk out without a bag full of goodies. Feel free to splurge, since a trip to the museum won’t cost you a thing: Entrance is free of charge.

Directions: The Ritter Museum is located in the town of Waldenbuch, about 15 miles south of Stuttgart. From downtown Stuttgart, take the B-27 until the Waldenbuch exit. Continue on Gartenstrasse for about seven miles. The museum is on the left.

Food: The museum has a cafe that serves sandwiches and other snacks. Ritter chocolate-flavored cappuccino and espresso also are served.