Wake up with a strong coffee from Kurashiki near Sasebo 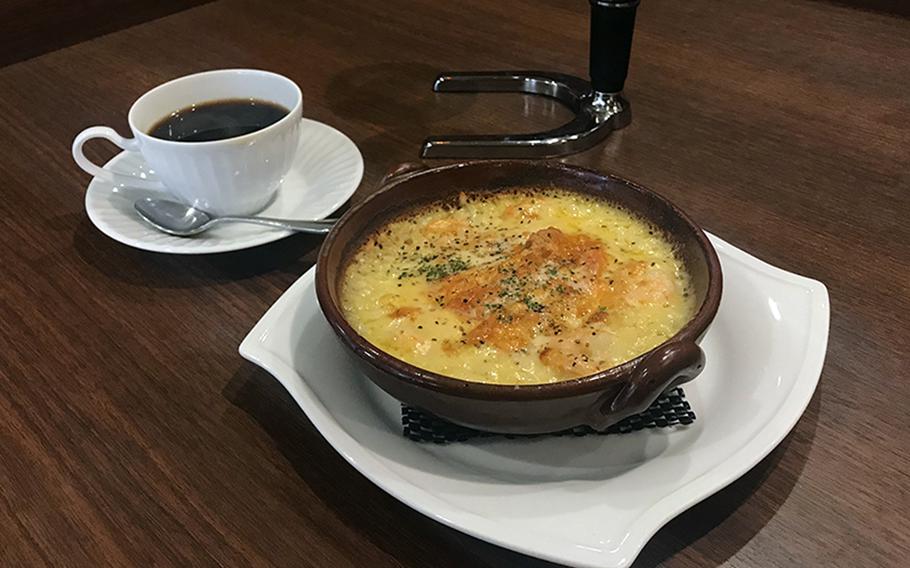 Buy Photo
Kurashiki Coffee in Sasebo, Japan, offers more than just a great cup of coffee. This cheesy rice bowl topped with shrimp made for a delicious meal after being topped with red chili powder. (James Bolinger/Stars and Stripes)

Buy Photo
Kurashiki Coffee in Sasebo, Japan, offers more than just a great cup of coffee. This cheesy rice bowl topped with shrimp made for a delicious meal after being topped with red chili powder. (James Bolinger/Stars and Stripes) Buy Photo
A hot, fresh cup of joe from Kurashiki Coffee in Sasebo, Japan, steams after being poured from a syphon brewing system. (James Bolinger/Stars and Stripes)

My trip to Sasebo Naval Base to welcome the USS America to Japan last December involved a 20-hour day traveling by train more than 700 miles round trip. That kind of travel calls for strong coffee.

Luckily, Kurashiki Coffee in Sasebo’s Naka Dori district can fill that bill early in the morning or late at night.

Kurashiki uses a single-serve siphon brewer for its signature coffee that makes a delicious cup that never tastes burned. It is also cool to watch the barista make your beverage.

Siphon coffee brew systems, also known as vacuum brewing, date to 1840s France and are popular around Japan. Siphon brewing uses a glass bulb filled with water and suspended below an empty glass beaker that holds coffee grounds and a filter.

As the water in the bulb is heated, steam forms and forces near-boiling water into the beaker above. Once all the water has been pushed out, the heat is turned off, the pressure created from the steam subsides and draws the brewed coffee back into the bulb.

The bulb is then delivered to your seat with a cup, a small pitcher of cream and some sugar, so you can make your cup to taste.

It’s a fancy way to brew coffee, but it’s tasty and different from any other coffee shop I’ve visited in Japan.

To accompany my coffee, I selected a cheesy rice bowl topped with shrimp. I added a little red chili powder to mine and made quick work of it.

If you can’t read Japanese, you will be ordering based on the pictures, as Kurashiki does not provide English menus. The staff speaks very little English, but the food is good enough that it’s worth stopping for.

My cheesy rice bowl was welcome warmth on a cold evening before sitting on a windy train platform for my four-hour trip back to Marine Corps Air Station Iwakuni. While it’s nothing to write home about, it was hearty, and I would order it again.

Kurashiki desserts really shine, though. I opted for a seasonal special that included French toast, ice cream and fruit topped with caramel, chocolate syrup and cinnamon. It was sweet and satisfying but was sized for two or more diners. The sweetness paired perfectly with my black coffee.

Kurashiki Coffee is open 7:30 a.m. to 10 p.m. every day. The shop is a quick one-mile walk from Sasebo’s main gate. There is also a branch in Hiroshima that welcomes Marines and sailors stationed at MCAS Iwakuni.