Votel: Time for Pakistan to step up in peace efforts in Afghanistan 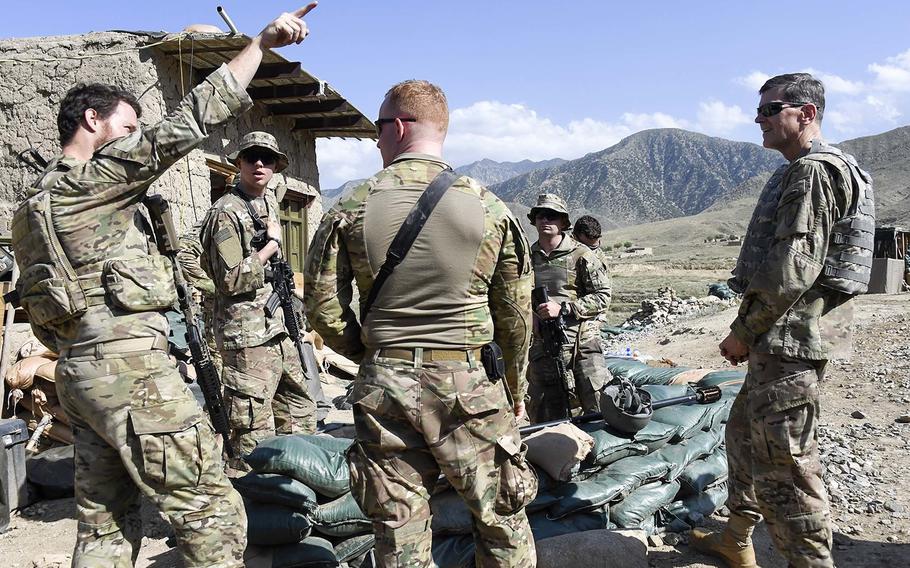 WASHINGTON — A successful cease-fire between Afghan forces and Taliban fighters last month helped create an “unprecedented opportunity” for peace efforts in Afghanistan, and now Pakistan – as a key regional player - must step up to the plate, the top commander of U.S. operations in the region said Thursday.

“We are seeing a very unprecedented and unique opportunity,” said Army Gen. Joseph Votel, the commander of U.S. Central Command. “Cooperation from Pakistan remains key to accomplishing the overall objective of a durable political settlement in Afghanistan,” he said. “Now is the time for them to step forward.”

Pakistan shares a long and porous border with Afghanistan. Throughout the U.S.-led campaign in Afghanistan that began after Sept. 11, 2001, U.S.-Pakistan relations have been delicate and often fraught, with U.S. officials pressing Pakistan to stop giving haven to Taliban and al-Qaida operatives and resources. U.S. officials have often complained that Pakistani cooperation has been inconsistent and incomplete.

Speaking to reporters at the Pentagon via teleconference from his headquarters in Tampa, Fla., Votel said he maintains a longstanding and “robust relationship” with the Pakistan chief of army staff and the two talk weekly. While there have been some signs of increased Pakistani efforts to help drive peace, Votel said it needs to do more.

Votel noted that Afghan-Pakistan peace discussions have led to an increase in cooperation between the two militaries, and that he’s seen a decrease in clashes along the border.

Still, Pakistan must continue to “press against the violence,” by arresting and expelling militants and by making greater efforts to “compel the Taliban to come to the table,” he said. “We have seen over the last few months some promising opportunities,” he said. “We’ve seen Pakistan move in some of the directions we’ve asked them to. But we need to see them do that in a more strategic way.”

Votel said he is encouraged by the conditions demonstrated by the three-day cease-fire in June. The main parties honored the halt in fighting, and while it was only temporary, it marked a “demonstrated desire for peace” not just from the Afghan people but also the Taliban and other militant fighters, he said.

There are other indicators that the time is ripe, he said. Afghan defense forces are making strides in training, conducting simultaneous operations around the country and continuing military pressure on the Taliban’s ability to generate revenue.

He’s also encouraged, he said, that Afghan security forces are undergoing a massive reorganization that includes replacing older leadership with young officers and commanders trained by American and coalition forces. At the same time, over 70 percent of eligible Afghan voters have registered for upcoming parliamentary elections.

With a commitment for international support in place until 2024, and Afghan President Ashraf Ghani making what he called “courageous offers” to move forward with the cease-fire and peace talks, he said new ground for peace has been prepared.

“The Afghan people and many Taliban grow more ready for peace as evidenced by peace marches, local and international religious ulema (Islamic scholars) condemnations of the insurgency, broad diplomatic support to the Afghan-owned peace process, and of course, the cease-fire,” he said. “Now is the time to do this.”

Still, he warned that the conflict is still far from over.

“Efforts in Afghanistan are showing progress,” he said, but it’s important “to highlight that much work and fighting remains.”