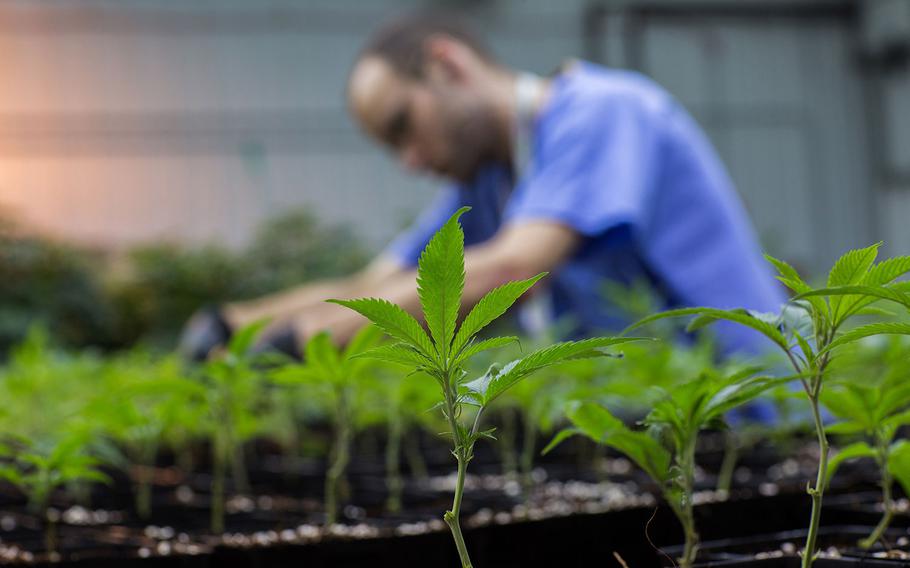 WASHINGTON — Researchers started this week the first-ever clinical trial of marijuana for treating the effects of post-traumatic stress disorder in veterans.

The trial will test four potencies of smoked marijuana and their effects to manage PTSD symptoms in 76 veterans, according to the Multidisciplinary Association for Psychedelic Studies. Approved by the Drug Enforcement Administration and the Food and Drug Administration, the study is intended to develop marijuana into a legal prescription drug.

“We are thrilled to see this study overcome the hurdles of approval so we can begin gathering the data,” Amy Emerson said in a written statement issued by the association. The nonprofit drives clinical research on the medicinal use of marijuana, LSD and MDMA, known more broadly as Ecstasy.

“This study is a critical step in moving our botanical drug development program forward at the federal level to gather information on the dosing, risks and benefits of smoked marijuana for PTSD symptoms.”

The $2.2 million trial is funded by the Colorado Department of Public Health and Environment. The first participant received marijuana Monday.

Researchers are looking for other volunteers who experienced trauma during their military service. The study is being conducted at the Scottsdale Research Institute in Arizona and Johns Hopkins University in Baltimore. Veterans will visit clinics 17 times over 12-week period, and then will be scheduled for a six-month follow-up. To apply, email arizona@marijuanasites.org or call Johns Hopkins at (410) 550-0050.

The association has worked since 2010 to gain approval for the study. The DEA gave its approval in April.

Dr. Sue Sisley, the medical researcher leading the portion of the study in Arizona – and a former Department of Veterans Affairs psychiatrist – said at the American Legion national convention last year that veterans were “getting desperate” for PTSD treatment.

“I could never reach that level of relief with traditional medications, so I knew I had to keep going,” she said of her research.

At the convention, the American Legion issued a resolution urging Congress to remove marijuana from the list of Schedule I drugs, which are designated as having no medical use.

“There are a lot of tools that are not being utilized,” American Legion Past National Commander Bill Detweiler said at the time. “Here is an opportunity for the Legion to step forward and help [veterans] who are suffering from PTSD.”

Congress blocked a provision last year that would allow VA doctors to recommend medical marijuana to patients in states where it’s legal.