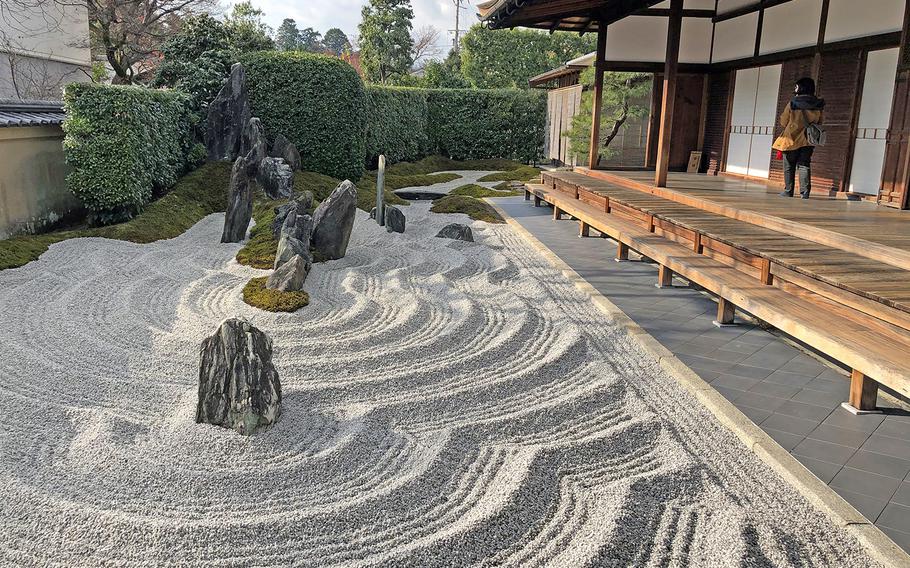 Buy Photo
The Garden of Solitary Sitting in the Zhuiho-in sub-temple at Daitoku-ji, Kyoto, Japan. (Joseph Ditzler/Stars and Stripes)

Buy Photo
The Garden of Solitary Sitting in the Zhuiho-in sub-temple at Daitoku-ji, Kyoto, Japan. (Joseph Ditzler/Stars and Stripes) 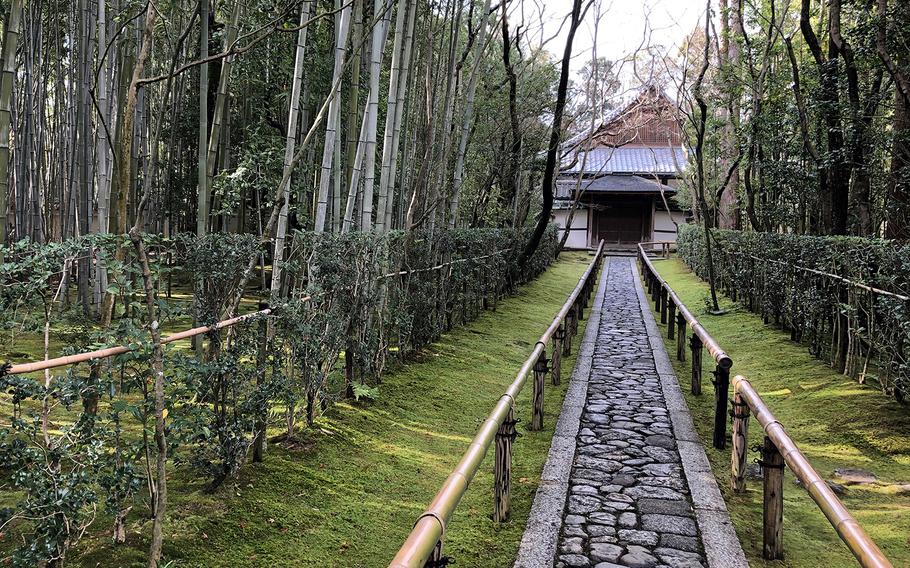 Drop “Zen” into conversation, and thoughts of one hand clapping or a properly maintained motorcycle may come to mind.

Less popularly understood, however, are the main precepts of Zen Buddhism and the different sects within the practice. One of those branches, Rinzai, is centered in the ancient, former Japanese capital, Kyoto, 2 ½-hours by bullet train from Tokyo, in a place called Daitoku-ji. It’s well worth a visit, even if you don’t know a koan from a kotsu.

Founded in the early 14th century, destroyed in the 16th century and subsequently rebuilt, the temple complex today encompasses 56 acres and nearly two dozen smaller sub-temples. One of them, the Koto-in, is considered an important site in the history of the Japanese tea ceremony. Many threads of Japan’s history in the 16th and 17th centuries are woven into the story of this world unto itself.

These smaller temples — despite their spare furnishings and simple, elegant construction — are intimate spaces. These buildings of wood, paper and tatami mats were meant for greeting guests, meditation and life’s everyday activities.

My first stop inside Daitoku-ji was the Ryogen-in temple, famous for its dry gardens and distinct architecture. The Hojo — the meditation hall and the chief priest’s quarters — is the oldest of its kind in Japan, according to information at the site. There, wooden floorboards creak underfoot with an antique sound. As you might expect in a Zen precinct, the Hojo is spare, and the artwork on its paper walls is sublimely beautiful.

On one side of the Ryogen-in is the Ryogintai, a dry garden built entirely on a large bed of moss. It is the oldest garden in the complex, dating to the Muromachi era, which ended in 1573. Nearby is the Totekkio, an enclosed rock garden considered the smallest of its kind in Japan.

Most intriguing for me was the Isshidan, a rock garden in the most traditional sense: a raked bed of stones with a teardrop-shaped bed of moss and large rocks positioned elsewhere.

The moss mound represents a tortoise island, a symbol of long life. It’s paired with rocks that represent a crane island, symbolic of happiness. Both are common installations in Zen gardens, and both also represent longevity.

In Isshidan, the central, tallest rock in the ensemble represents Mount Horai, a Japanese national, natural monument considered a source of spiritual strength. The group is surrounded by raked gravel representing waves upon the ocean surface. Visitors are compelled to sit awhile on a wooden porch and take in the scene.

Nearby in the Ryogen-in is a room in which Ieyasu Tokugawa, founder of the 260-year-old shogunate that lasted until the imperial restoration in the mid-1800s, played Go, a Japanese board game, with Hideyoshi Toyotomi, a powerful samurai and feudal lord in his own right. The board on which the two played is on display, along with a firearm that belonged to Tokugawa. He later unseated Hideyoshi’s son to unify Japan and rule as shogun.

Leaving the Ryogen-in, I moved next to the Koto-in, which includes a tea house called the Shoko-ken built by 16th-century warlord Hosokawa Tadaoki, a student of Sen no Rikyu.

Rikyu, a merchant from Osaka prefecture, devoted himself to the tea ceremony and became a confidant of Hideyoshi’s, who eventually ordered Rikyu to commit ritual suicide at his patron’s home in Kyoto.

Rikyu taught the ceremony at Daitoku-ji and built tea rooms there. Basic movements that he incorporated into the tea ceremony are still practiced today.

This center of Zen Buddhism has within it two links to Christianity. Hosokawa’s wife, Gracia, was a Catholic convert. The two are buried on the grounds of Koto-in. And Otomo Sorin, a feudal lord and the founding patron of the nearby Zuiho-in sub-temple, converted to Catholicism in the 16th century.

Otomo became known as the “Christian daimyo.” (Daimyo means feudal lord.) The Zuiho-in today includes a rock garden created by 20th-century designer Mirei Shigemori and known as the Garden of the Cross. The garden rocks form an asymmetrical cross. A statue of the Virgin Mary is buried in the garden and symbolizes the 200 years when Christianity was banned in Japan.

My Daitoku-ji visit lasted into the early afternoon. Several hours vanished while I paused to contemplate the gardens, inspect the austere but inviting building interiors and walk the grounds.

Afterwards, I was ready to meditate on lunch. Just across the street from the temple’s main gate is a small, French-influenced Japanese restaurant, Cafe Du Mon. Reviews on TripAdvisor add up to five stars, with good reason. If there is Zen in cuisine, you’ll find it there.

Directions: Daitoku-ji is located at 53 Murasakino Daitokuji-cho, Kita-ku, Kyoto-shi, 603-8231. Daitoku-ji is a 15-minute walk in northern Kyoto from Kita-oji Station on the Karasuma subway line. From the station, Katoji dori street brings you to the temple; the main gate is a bit north of the street. Google Maps took me in zigzag fashion through side streets right to the gate. The Karasuma line connects with Kyoto Station. Alternately, take bus Nos. 205 or 206 from Kyoto Station and get off at the Daitokuji-mae bus stop.Times: Varies, generally from 9:30 a.m. to 4:30 p.m.Costs: Admission to the complex is free; the cost to enter the open sub-temples is 400-500 yen ($4-$5).Food: You’ll find a Starbucks not far from Kita-oji Station en route to the temple. Cafe Du Mon, facing the main temple gate, offers fresh, light and creative lunch specials starting at 1,000 yen (about $10).Phone: 075-491-0019