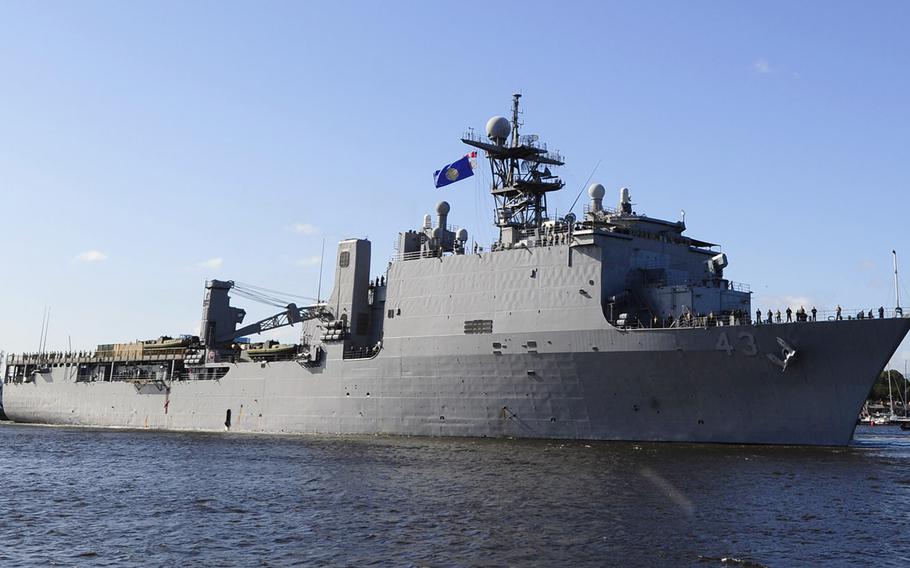 WASHINGTON — Twenty-five sailors and Marines aboard the USS Fort McHenry became ill from a viral infection that spread throughout the ship during its current deployment, according to the Navy.

The first case of parotitis, a viral infection with symptoms similar to mumps, was detected Dec. 22, according to a statement by 5th Fleet. Since then, 25 servicemembers, including members from the 22nd Marine Expeditionary Unit who are on the ship, were infected.

The USS Fort McHenry began their deployment Dec. 12 out of their homeport of Mayport, Fla., according to the ship’s Facebook page. Ten days later, the first case of parotitis was detected. The ship is now deployed to the Middle East in the 5th Fleet area of operations.

All but one servicemember has returned to duty and there have been no active cases since March 9, the Navy said.

“None of the cases are life-threatening and all are expected to make a full recovery,” according to a 5th Fleet statement.

The viral infection affected less than 4 percent of the ship’s personnel, Lt. Chloe Morgan with 5th Fleet public affairs wrote in an email about the illnesses.

When they were symptomatic, the sailors and Marines were quarantined and treated in the ship’s medical facilities, the Navy said. Their living and work areas were also cleaned and disinfected.

Everyone aboard the USS Fort McHenry were given a measles, mumps and rubella booster vaccination “out of an abundance of caution,” according to the statement.

The illnesses caused the ship’s operational schedule to be modified, the Navy said, while the crew is monitored by the ship’s medical team.

“The U.S. Navy maintains a strong presence in the U.S. 5th Fleet area of operations and we have the ability to shift operational tasking to ensure all missions are carried out by the most capable asset,” Morgan said.

The USS Fort McHenry has continued routine unit-level training and operations, the Navy said. According to information published by the Defense Department, the ship conducted an exercise with the Egyptian navy last month and recently transited through the Strait of Hormuz, the waterway that connects the Persian Gulf to the Arabian Sea.