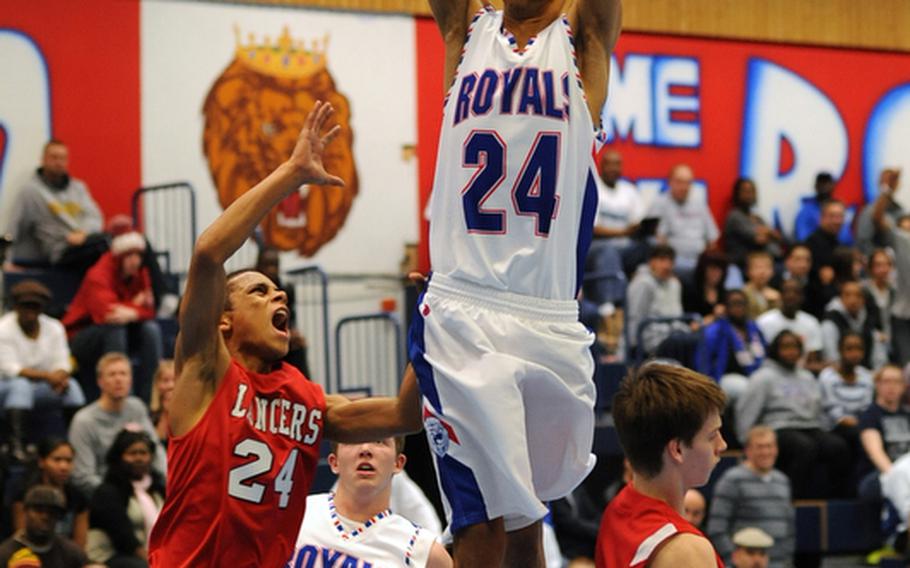 Ramstein's Devonte Allen glides through the defense of Lakenheath's Chris Cederstaff, left, and Glenn Jones for a dunk in the Royals 69-56 win over the Lancers in Ramstein Saturday. (Michael Abrams/Stars and Stripes)

Ramstein's Devonte Allen glides through the defense of Lakenheath's Chris Cederstaff, left, and Glenn Jones for a dunk in the Royals 69-56 win over the Lancers in Ramstein Saturday. (Michael Abrams/Stars and Stripes) 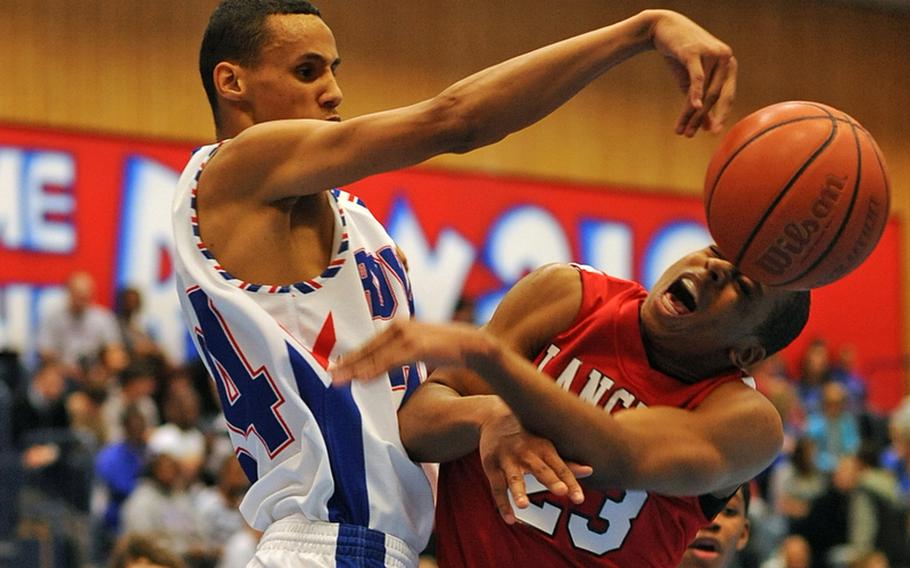 Lakenheath's K.J. Holloway, right, gets called for an offensive foul as he collides with Ramstein's Devonte Allen in high school action in Ramstein Saturday. The home team won 69-56. (Michael Abrams/Stars and Stripes) 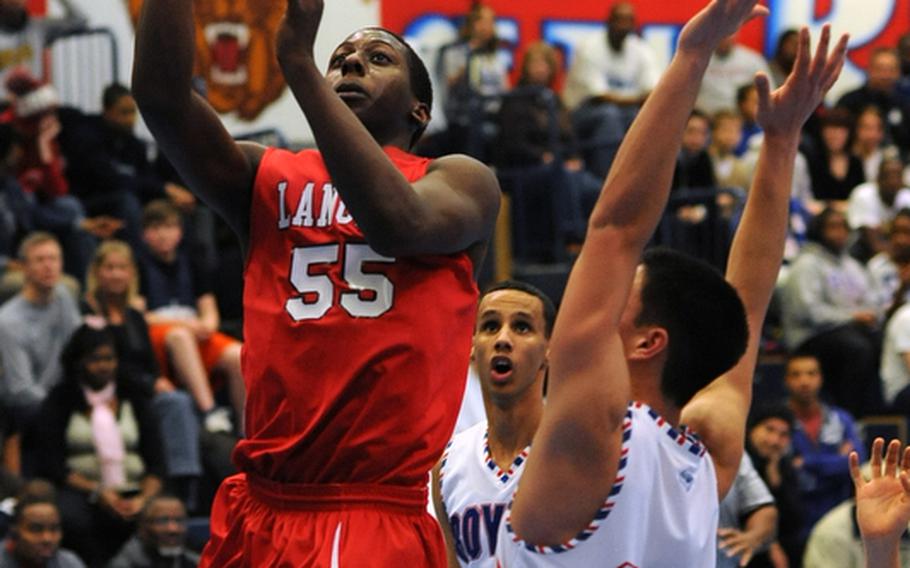 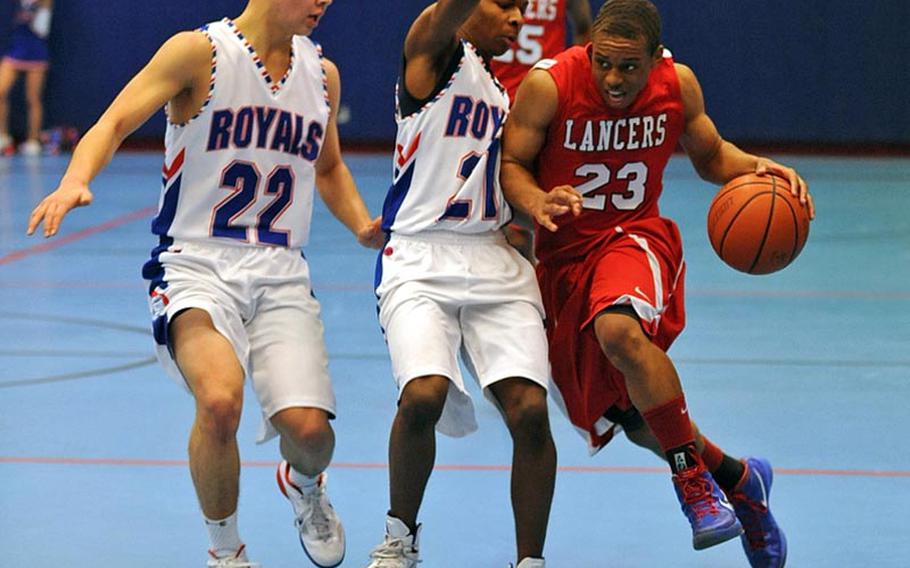 Defense made the difference Saturday as the Vilseck Falcons toppled the Patch Panthers from the ranks of the unbeaten.

Outscored 33-16 in the second half of Friday&rsquo;s 58-41 loss to Patch, Vilseck responded Saturday by limiting their guests to just 24 points after intermission Saturday and claimed a 55-46 victory over the previously unbeaten Panthers.

Calvin Hickman&rsquo;s double-double, 16 points and 14 rebounds, along with the four shots he blocked, provided the impetus for Vilseck, 6-2 overall and in Region III. Tyler Lewis kept it going for Vilseck, finishing the game with 10 points, seven assists and four rebounds.

Patch fell to 7-1 overall and 5-1 in the region in spite of 13 points each from Dylan Measells and Chris German. Both players reached double-figures on Friday, too, with Measells scoring 13 and German 10. Damien Babington scored 12 points and Stephon McLean-Burrell 11 for Patch on Friday.

In other boys&rsquo; games of note:

Heidelberg 50, Bamberg 32: Saturday at Bamberg, the Lions pulled away from their D-III hosts with a 17-7 third-quarter run that propelled them to a 8-0, 6-0 record. Heidelberg is riding a 15-game DODDS-Europe winning streak.

As he had Friday night, with 15 points and four assists in Heidelberg&rsquo;s 54-40 victory, Marcel Simon fueled the Lions&rsquo; attack with 10 points and six rebounds. Viane Tagaloa also scored 10 points for the Lions, who have home-and-homes against Ansbach and Patch and home games against Vilseck standing between them and the Region III crown.

The victory evened Wiesbaden&rsquo;s record at 5-5 overall and 4-4 in Region II.

Baumholder fell to 6-5, 3-4 despite the return of scorer Tahrell Harris, who missed Friday&rsquo;s 60-45 home victory over Wiesbaden because of a Model U.N. trip. Breon Herbert took up Harris&rsquo; scoring load on Friday, striking for 26 points. Harris had 14 points on Saturday.

Bitburg (2-8, 1-5), which fell to BFA 57-52 in Friday night, trailed by 17 in Saturday&rsquo;s third quarter, according to BFA coach Art Melli, but mounted a 21-13 fourth-quarter run which forced the overtime.

BFA is 3-5 overall and in the region.

Sigonella 28, American School of Milan 14: Milan arrived in spite of the strike-induced gasoline shortage plaguing Italy this week, but Chris McKissick refused to cut the Panthers any slack. He scored 12 points and grabbed 10 rebounds to lift the Jaguars to a 4-6 record on Saturday. Friday, he scored 10 points to match teammate D&rsquo;Ontrell Harrington for game-scoring honors in Sigonella&rsquo;s 41-19 triumph over winless Milan.