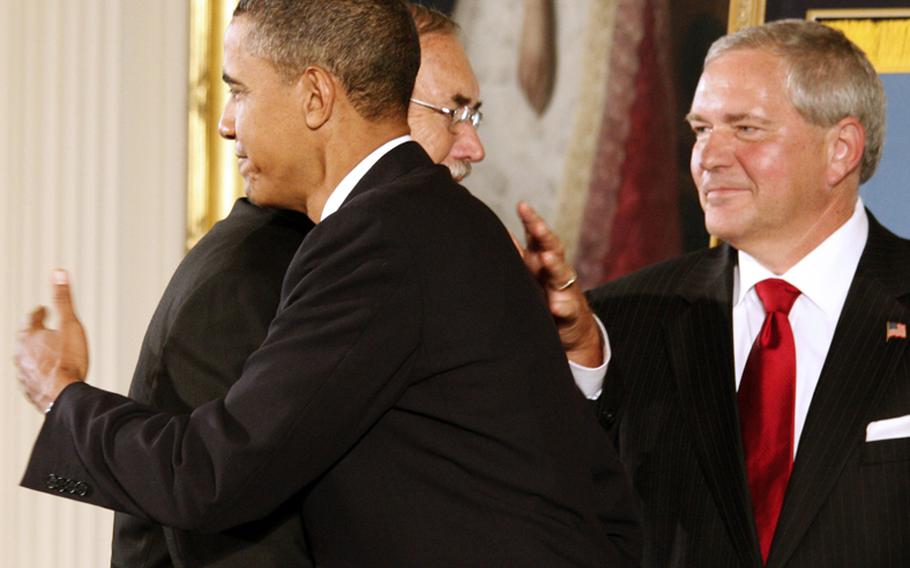 WASHINGTON &ndash; More than four decades after he saved three airmen but lost his life, Chief Master Sgt. Richard L. Etchberger was awarded the Medal of Honor in a ceremony at the White House on Tuesday.

In March 1968, Etchberger was one of 19 airmen on a secret mission in Laos calling in airstrikes on the Ho Chi Minh trail when the North Vietnamese overran their base, trapping Etchberger and other airmen on the ledge of a steep cliff.

&ldquo;As a technician, he had no formal combat training,&rdquo; Obama said. &ldquo;In fact, he had only recently been issued a rifle, but Dick Etchberger was the very definition of an NCO &mdash; a leader determined to take care of his men.&rdquo;

Etchberger fought off the enemy and later loaded wounded men into a helicopter. When the fighting was over, only seven airmen survived, three of whom owed their lives to Etchberger.

One of those airmen was John Daniel. He and Etchberger were with three other airmen perched on the ledge of the cliff that dropped off about 3,000 feet.

The enemy was firing and dropping grenades on them from above.

As the shooting progressed, Daniel was hit twice in the legs and two airmen were killed. Another was hit, lost consciousness and was presumed dead. At one point, Daniel used the body of a fallen comrade to absorb a grenade blast.

From a hole nearby, Etchberger told Daniel to call in airstrikes on their position.

&ldquo;We told them to keep all their ordnance on top of the hill, anything that moved was theirs. Nobody alive but me and Dick,&rdquo; Daniel said. &ldquo;Come to find out we were wrong, but at the time we didn&rsquo;t know it.&rdquo;

Shortly after daybreak, a helicopter from CIA-operated &ldquo;Air America&rdquo; saw the airmen on the side of the cliff. Etchberger broke cover and ran to Daniel to fit him into a sling that allowed him to be pulled into the helicopter.

&ldquo;&lsquo;Thank you, Dick, thank you. God bless,&rsquo;&rdquo; Daniel told him.

It was the last time Daniel talked to him.

By this time, the last airman in their group had regained consciousness and Etchberger loaded him into the sling. Etchberger was ready to go up next when an airman from another group came running over. The two men locked arms and were pulled up together.

As the helicopter pulled away, an enemy soldier below unloaded his AK-47 into the aircraft&rsquo;s belly. Etchberger was hit and bled to death before the helicopter landed.

Daniel blacked out from the pain during the flight, so he didn&rsquo;t know Etchberger was dead until he was transferred to an airplane

Daniel has no doubt he would have been killed if Etchberger had not gotten him on the helicopter. The enemy would have just shot him rather than have to take care of a wounded prisoner.

When asked how he feels that Etchberger is now receiving the Medal of Honor, Daniel&rsquo;s voice drops. His friendly drawl becomes a growl.

&ldquo;Forty-two-plus years too goddamn late,&rdquo; Daniel said bluntly. &ldquo;It should have happened 42 years-plus ago, and he should have gotten a damn 55-gallon drum full of them if he wanted them.&rdquo;