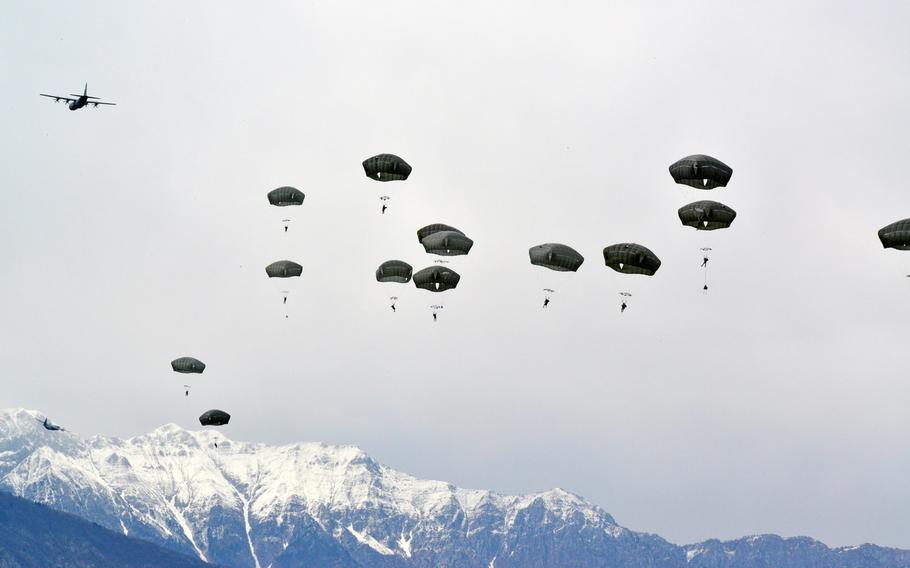 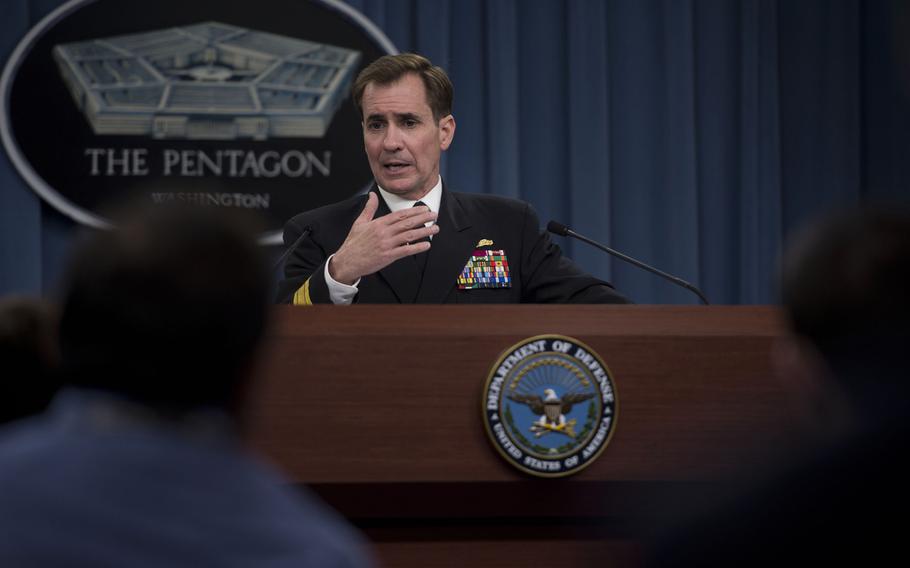 Admiral John Kirby briefs the press at the Pentagon April 22, 2014. Kirby answered questions regarding upcoming joint exercises between the U.S. and Poland as well as addressing Secretary Chuck Hagel's upcoming trip to Mexico and Guatemala. (Erin A. Kirk-Cuomo/Department of Defense)

The U.S. is deploying 600 troops to Poland and the Baltic states to participate in joint infantry training exercises, Defense officials announced Tuesday, part of an effort to reassure allies in the former Soviet sphere of influence concerned about Russia’s newly aggressive posture.

Four companies from the 173rd Infantry Brigade Combat Team, based in Vicenza, Italy, will be dispatched — one to Poland, one to Latvia, one to Lithuania and one to Estonia. About 150 paratroops will arrive in Poland on Wednesday, and the rest of the 600 will be in place in the Baltic States by Monday, Pentagon Press Secretary Rear Adm. John Kirby and European Command officials said.

This will be the first in a series of rotational deployments for training exercises that will continue throughout the rest of the year and possibly beyond, according to Kirby.

“The message is to the people of Poland, Lithuania [and] Estonia, that the United States takes seriously our obligations” under Article 5, Kirby said. That article of NATO’s founding treaty regards any attack against a member state as an act of aggression against the entire alliance. “If there’s a message to Moscow, it is that...we take our obligations very, very seriously on the continent of Europe.”

Since Russia’s annexation of Ukraine’s Crimea peninsula, allies in eastern Europe fearful of Russian intentions in the region, have watched events unfold with concern. Moscow has since massed about 40,000 troops and other military assets along Ukraine’s eastern border. In the midst of ongoing political unrest in Ukraine, Russian President Vladimir Putin has said he reserves the right to use military force to protect ethnic Russians in other countries.

In recent weeks, the U.S. bolstered its presence in the region, including adding rotations of F-16s in Poland for training missions and bolstering air policing over the Baltics. NATO surveillance aircraft also has been deployed to Poland and Romania to monitor events in Ukraine.

Last week, NATO also announced additional measures aimed at reassuring allies, focused mainly on an intensification of NATO’s air policing mission over the Baltics and the deployment of more allied ships into the Baltic Sea and eastern Mediterranean.

Earlier this month, a Russian Su-24 fighter jet made a dozen close-range, low-altitude passes near the USS Donald Cook destroyer. The Cook was in international waters in the Black Sea at the time. The Pentagon called the actions “provocative and unprofessional.” Kirby said the USS Taylor will replace the Cook in the Black Sea after the Cook finishes its mission.

Poland has sought a more robust presence of U.S. and NATO forces in the country, with the country’s Foreign Minister Radoslaw Sikorski urging NATO to station 10,000 troops in Poland.

EUCOM said in a news release the U.S. Is increasing land force activities in the region “at the request of the host nations.”

“These events are in addition to previously scheduled multinational land force military exercises and are aimed at assuring our regional allies of the United States’ unwavering commitment to NATO, EUCOM said.