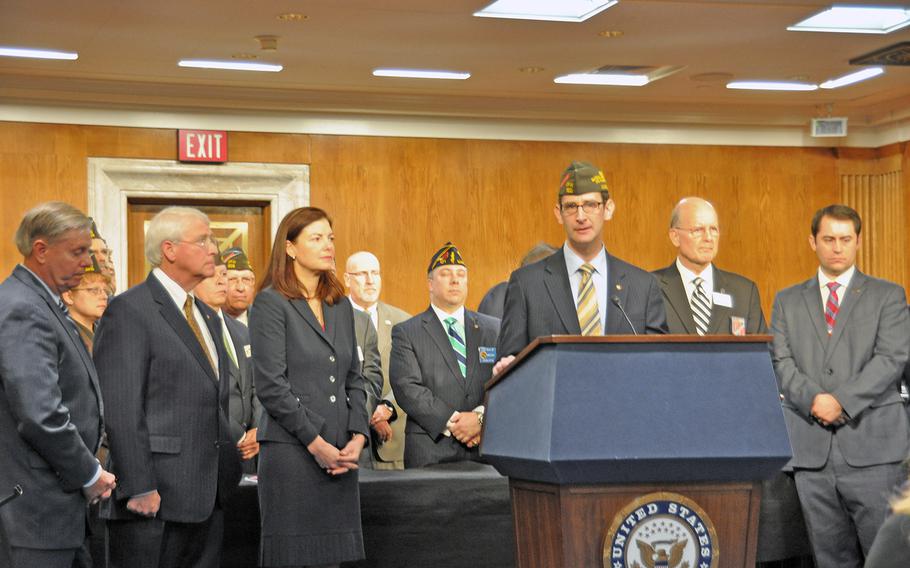 Ray Kelley, director of the Veterans of Foreign Wars legislative division, argues against plans to trim military retirement increases as part of a comprehensive budget deal, during a Capitol Hill news conference in December. (Leo Shane III/Stars and Stripes)

WASHINGTON — With Congress back this week, veterans groups are vowing to resume their fight against trims to military retirement benefits.

But what they’re really fighting for is relevancy, and to make sure the country hasn’t forgotten about them.

Military advocates worry that Congress’ willingness to attack veterans’ retirement checks shows that lawmakers — and perhaps the public — have already moved on from the wars of the last decade, and that the sacrifices and promises made will be forgotten.

“This is what happens when you have an unengaged population whose focus starts to shift away,” said Tom Tarantino, chief policy officer for Iraq and Afghanistan Veterans of America. “When times get tough, people say everyone has to sacrifice. But not everyone has been sacrificing for the last 10 years.”

The cut is a 1 percent trim on cost-of-living increases for working-age military retirees. Veterans 62 and older won’t see any changes. But those younger — including medically retired servicemembers — will see their annual increases trimmed starting in January 2016.

The move will save about $6.3 billion over 10 years, and was included as part of a budget deal designed to avert another government shutdown.

Lawmakers who backed the deal bemoaned the military retirement changes but said fixing the problem later was preferable to jeopardizing budget harmony now. At least 14 separate bills to repeal the cut have been introduced in the two weeks since the deal passed.

In the last week, editorial boards at USA Today and the Washington Post have called the veterans’ opposition out of touch, noting that the military’s generous retirement benefits aren’t comparable to any private sector pensions. The Post called it a “dishonor” not to change a military retirement system long overdue for an update.

But veterans groups argue that work is underway, in the form of a compensation commission reviewing large-scale changes to military pay and benefits.

They thought lawmakers had agreed not to make any changes until after that panel’s recommendations were completed by February 2015, and had agreed that only changes to new retirees’ benefits would be considered.

“This caught us by surprise,” admitted Jack Klimp, president of the National Association for Uniformed Services. “And that’s always the danger we face, that politicians will forget the promises they made.”

Ryan said last week that Defense Department leaders proposed the retirement cut. Murray said she disliked the retirement cut, but believed that averting more fiscal brinksmanship and another government shutdown was the top goal for all Americans, including veterans.

Both lawmakers have promised to find fixes in coming months, including exempting disabled veterans from the cost-of-living trims.

In the days before the budget deal vote, a number of the veterans group leaders were agitated at having been left out of the budget discussions, railing against lawmakers in news conferences and muttering stronger insults from the sidelines.

Tarantino believes the reason that veterans groups were kept in the dark is simple: “They knew we would be a huge problem. We would have worked to scuttle the deal, or at least that part, before they got it out.”

But visits to Capitol Hill offices produced only promises of corrections later, and not the immediate rejection that the veterans lobbyists wanted.

Last month, lawmakers also OK’d a 1 percent military pay raise for 2014, the lowest annual bump since the start of the all-volunteer force.

“We’ve seen this before, where lawmakers go after military personnel when the wars end because they’ve become an easy target,” Klimp said. “I think it’s a national disgrace.”

Unlike recent sessions, Congress failed to pass any sweeping veterans legislation last year, including measures backed by veterans groups on expanding GI Bill benefits and providing advance funding for the Department of Veterans Affairs. It’s unclear whether that’s a reflection of groups’ waning influence or the partisan gridlock.

Either way, it’s a frustrating message.

Officials at Student Veterans of America have warned that lawmakers are eyeing the costs of veterans education benefits for savings initiatives. Groups lobbying the military compensation commission have also predicted dramatic cuts to active-duty and retirement benefits.

Congress has provided steady increases to the VA budget since the start of the war in Afghanistan, but leaders worry how long that generosity will last.

For now, the focus is on repealing the military retirement cut. Even with two years before it goes into effect, opponents are saying they might not have enough time to change it.

It’s unclear which, if any, of the repeal bills pending in Congress might pass. Several have no spending offsets, which usually spells quick defeat in the Republican-led House. Others make up the $6-billion-plus in cuts with politically tricky proposals: ending tax loopholes, cutting foreign aid, ending Saturday postal delivery.

Senate Armed Services Chairman Carl Levin, D-Mich., has promised hearings on the issue, and the veterans affairs committees are expected to take up the topic as well.

But Mike Hayden, director of MOAA’s government relations, worries that if Congress doesn’t move quickly on the issue — within weeks — it won’t get fixed anytime soon.

He pointed to the mandatory budget cuts put in place under sequestration in August 2011. Lawmakers spent two years denouncing the across-the-board cuts as terrible policy, but failed to pass any meaningful legislation before the cuts went into effect.

“Congress recently has been good at getting things done at the 11th hour, but not before,” he said. “We don’t want that again. We’d like to put this behind us before we get into the (fiscal 2015) budget discussions this spring.

“Otherwise, we don’t know when they’ll deal with it.”