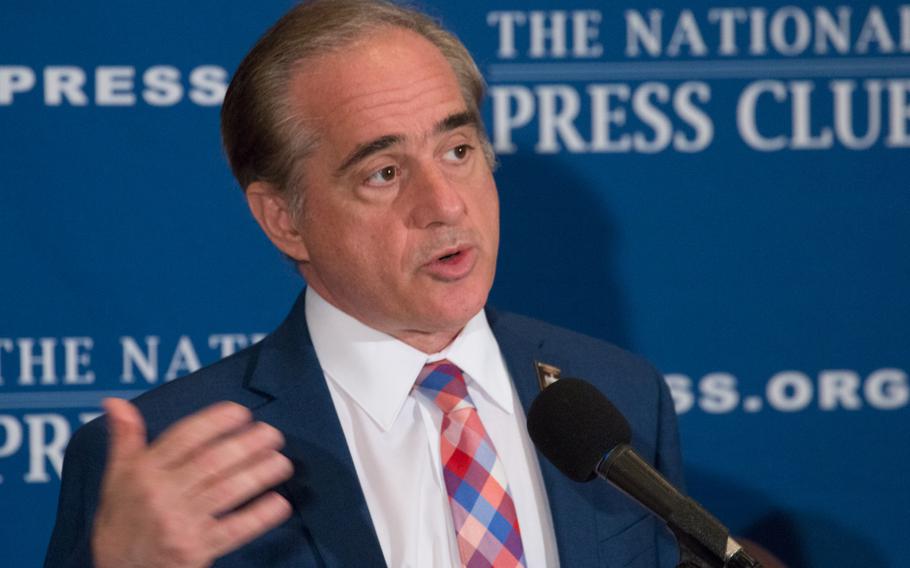 WASHINGTON — Department of Veterans Affairs Secretary David Shulkin went to Capitol Hill on Wednesday seeking $800 million to begin an overhaul of the VA’s electronic health records – an initiative nearly 20 years in the making.

The VA is close to entering into a contract with Cerner Corp., the health information technology company it chose to implement a new electronic health records system. But first, Congress must allow the VA to reappropriate $782 million in other department funds.

If the VA doesn’t secure funding by the end of the year, the contract will cost more, and a 10-year implementation timeline will be thrown off, Shulkin told a House Appropriations subcommittee Wednesday.

“We have to do this quickly,” he said. “The right thing to do is act with urgency, be aggressive and implement strict timelines.”

Lawmakers on the subcommittee were skeptical.

“When I think about the time and resources wasted over the years on this endeavor, it is easy to see why members have such frustration on this issue,” said Rep. Debbie Wasserman Schultz, D-Fla. “It’s been an unbelievably lengthy process, even for government.”

Since 2000, members of Congress have pushed the VA to create a system capable of sharing patient data seamlessly with the Defense Department. Soon after former President Barack Obama took office in 2009, he charged the VA and DOD with creating an integrated system. The plan was abandoned in 2013 because of cost concerns after the agencies had already spent about $1 billion.

“If we get your support moving forward, we won’t allow that to happen,” Shulkin insisted. “We’ll stick at this. It’s going to be hard, and there will be stumbles, but this is something we have to get done for the country.”

The VA has continued to spend money to fix its in-house system, called VistA, described by the Government Accountability Office as “old, inefficient and difficult to maintain.” Bringing VistA up to health industry standards would cost $19 billion over 10 years, Shulkin said.

In June, Shulkin announced the VA would buy an off-the-shelf system from Cerner – the same one the Defense Department uses. The overhaul would allow transitioning servicemembers’ medical records to immediately be shared with the VA, Shulkin said. It would also allow the VA to share health records with its private-sector health care providers.

The $782 million is just the start. Shulkin did not say in the public hearing Wednesday how much implementing a new commercial system would cost over time, only that it was “billions less” than the $19 billion it would take to fix VistA.

The initial contract for the Defense Department’s commercial system in 2015 totaled $4.3 billion.

“This is the first step down a long and expensive road,” said Rep. Charlie Dent, R-Pa., chairman of the subcommittee.

The subcommittee met with Shulkin in a closed session later Wednesday to discuss specifics that Dent said could affect contract negotiations.

Rep. Rodney Frelinghuysen, R-N.J., said that agreeing to the $782 million transfer would “commit this congress and future congresses to this plan.”

Shulkin wants the $782 million approved as part of VA’s fiscal 2018 budget, but work on congressional appropriations isn’t likely to start until after the Thanksgiving break.

“Absent an appropriation bill by the end of the calendar year, we ask Congress to consider approving our transfer request so we can promptly approve the contract,” Shulkin said.

Once a contract with Cerner is signed, the new system is expected to be operational at the first locations in 18 months.