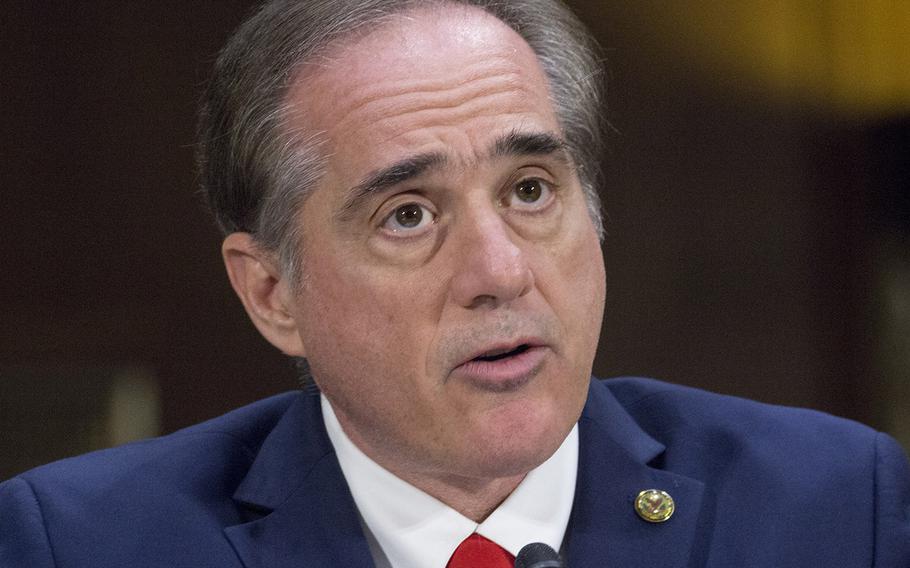 WASHINGTON — Department of Veterans Affairs Secretary David Shulkin is using a recent attempt to fire a porn-watching employee to demonstrate why Congress should give him more disciplinary power.

An employee at the Michael DeBakey VA Medical Center in Houston was caught watching pornography in the presence of a veteran patient, the VA wrote in a statement Friday. VA officials responded by prohibiting the employee from working with patients, but because of appeals processes, they can’t yet fire the worker.

Shulkin is using the situation as an example of the department’s lengthy process for firing, demoting or suspending employees — and why he thinks it should change.

“We’re taking a hard stance we want this employee removed, and we do not believe the current laws allow us to do that quickly enough,” Shulkin said Sunday on “Fox and Friends.”

The law states that the VA must give employees 30 days’ notice of their removal, during which employees can build a defense to appeal disciplinary action against them. The employee in Houston was put on notice and continues to be paid, the VA statement says.

The House passed legislation March 16 that cuts the advance written notice to 10 days. The bill, HR 1259, would also shorten the time employees have to appeal and require quicker determinations from those who hear the appeals.

In the statement, Shulkin pressed the Senate to quickly take up the issue. He said Sunday that President Donald Trump is “fully supportive” and “looking forward to being able to sign an accountability bill.”

It’s uncertain when senators will review the legislation, which has faced criticism from a federal union that says it does away with employees’ due process rights. A similar bill stalled last year after passing the House.

After the VA statement Friday, Sen. Johnny Isakson, chairman of the Senate Veterans’ Affairs Committee, said he agreed that 30 days’ notice was too long and that there was need for a legislative fix. His office said Monday they weren’t sure when the committee would take up any accountability legislation but that it was a top priority.

Dan Caldwell, policy director for conservative-leaning Concerned Veterans of America, said Shulkin’s latest statement could help drive the bill forward. Since the legislation passed the House, CVA leaders have been meeting with senators and asking their members to call them.

The bill is backed by 13 veterans and military organizations, including CVA, that see it as a way to root out a perceived culture of corruption in the department.

“The VA secretary coming out and stating that he needs the ability to more quickly fire some of these employees is extremely helpful to the effort,” Caldwell said. “The White House is also on board. I think those factors combined really give this bill a lot of momentum, and we hope the Senate will pick it up in the next several weeks.”

The House vote to pass the bill was split along party lines after Republicans nixed several amendments.

Rep. Tim Walz, D- Minn., the highest-ranking Democrat on the House Committee on Veterans Affairs, has warned that the bill’s aggressiveness would lead to another stall in the Senate.

Walz said he supported giving Shulkin more firing authority but took issue with a part of the legislation that would remove employees’ option to initiate a grievance procedure through their unions. The American Federation of Government Employees, a union that represents 220,000 VA employees, came out strongly against the bill — especially that provision.

Walz predicted that because of it, the Senate won’t make any moves on the bill by October.

Shulkin, though, said he was optimistic.

“The Senate, I believe, will move forward with something,” he said on Fox.