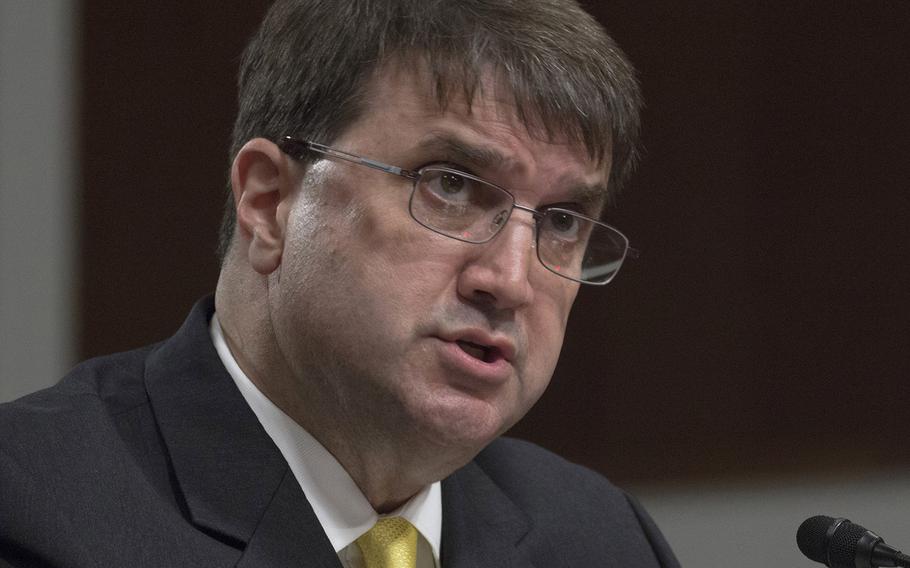 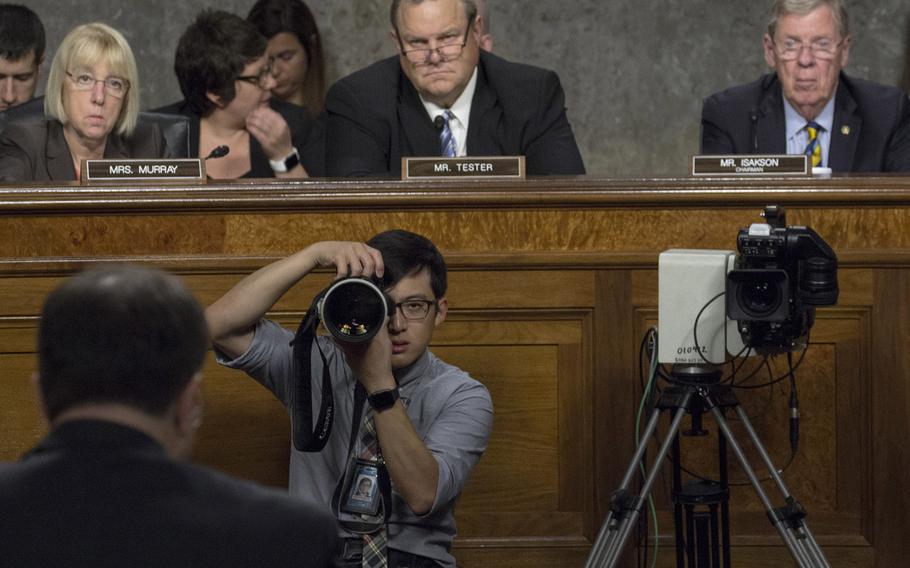 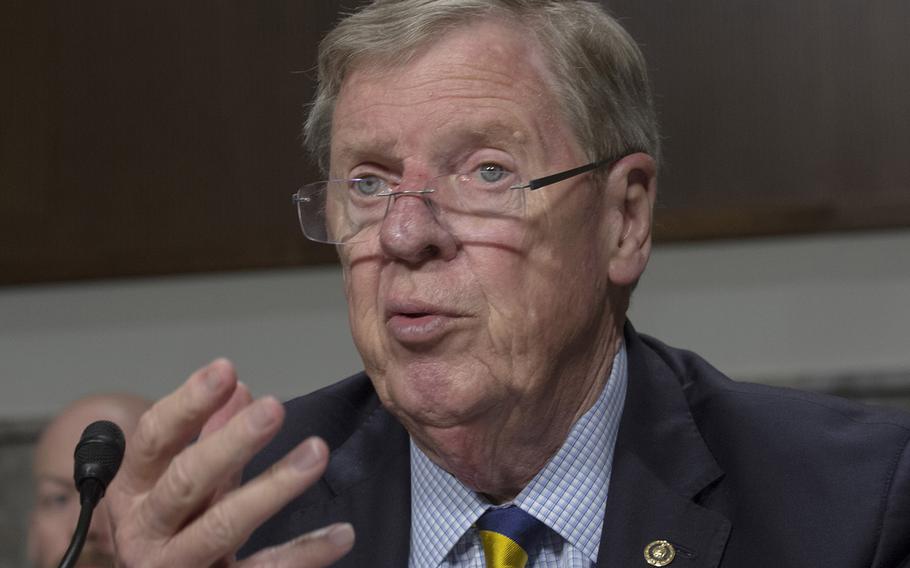 Secretary of Veterans Affairs nominee Robert Wilkie is sworn in at the start of a Senate Veterans' Affairs Committee hearing on Capitol Hill, June 27, 2018. (Joe Gromelski/Stars and Stripes)

WASHINGTON – After months of unsteadiness at the top echelons of the Department of Veterans Affairs, lawmakers and major veterans groups are looking for consistency at the agency – and they think Robert Wilkie could be the one to deliver it.

Wilkie, President Donald Trump’s pick for VA secretary, faced a panel of senators Wednesday, most of whom seemed willing to approve his nomination. Wilkie, 55, was considered a safe choice for the job given his decades of experience working on military issues on Capitol Hill, the Pentagon and White House.

Sen. Jon Tester, D-Mont., the ranking Democrat on the Senate Veterans’ Affairs Committee, praised Wilkie as a “straight-shooter.” Sen. Sherrod Brown, D-Ohio, said he expected Wilkie to be confirmed by the Senate, and other senators addressed him as if certain he’d get the job.

“You are getting an agency that has its problems,” said Sen. Johnny Isakson, R-Ga., the committee chairman. “We know what the problems are, we know what we need to do. We stand ready to be the wind at your back and to have your back to see to it our veterans get what they fought for.”

If confirmed by the Senate, Wilkie will take over the second-largest federal agency, with a nearly $200 billion budget and 375,000 employees. He’ll be tasked with leading implementation of a massive VA reform bill Congress passed this month to overhaul the VA’s private-sector care programs. He’ll also oversee a multibillion-dollar project to establish a new electronic health record system.

During the two-hour hearing, Wilkie promised to focus on a host of issues, including opioid abuse, veteran suicide, medical staff shortages and a backlog of veterans’ claims for disability compensation. He vowed to not allow the slow erosion of the VA in favor of the private sector, and he defended himself against a Washington Post report from Tuesday that criticized him for embracing divisive cultural views.

“You not only answered questions, but you anticipated questions as good as anybody I’ve ever seen in front of a Senate committee,” Tester said near the end of the hearing. “I, as others, believe you are going to be confirmed. You have a lot of challenges in front of you, and I think you got the tools to do the job.”

Trump announced May 18 he planned to nominate Wilkie to replace former VA Secretary David Shulkin, who was fired in March following months of political infighting and a damaging inspector general report about an official trip he and his wife took to Europe.

“We are seeing non-partisan senior leaders and subject-matter experts leave the VA in droves – many are concerned that sound policies and ideas are being increasingly marginalized at the expense of political interests,” Tester said.

Tester criticized political appointees Trump placed in the VA, blaming them for the leadership turmoil and for other recent controversies, including a fight between acting VA Secretary Peter O’Rourke and VA Inspector General Michael Missal over access to information, as well as the VA using its official Twitter account to attack news outlets as “fake news.”

Tester expressed confidence in Wilkie to act in the best interest of veterans, even when faced with possible opposition from White House insiders.

“Sooner or later, you’ll come to a crossroads with these folks,” Tester said. “My only advice to you is to take your cues from veterans and do what you think is right, even if political forces threaten your job. Because I want you to succeed, I really do. And veterans across this country need you to succeed.”

Wilkie, a former Reserve officer in the Navy and Air Force, has a history of military policymaking. He worked under Sen. Thom Tillis, R-N.C., and former secretaries of defense Robert Gates and Donald Rumsfeld. He currently serves as the Defense Department undersecretary of personnel and readiness.

The Post reported Tuesday that Wilkie has embraced and defended divisive cultural issues during his tenure in politics. He led efforts this year to justify Trump’s ban on transgender troops, opposed an effort in the 1990s to ensure equal pay for working women, and was previously a member of the Sons of Confederate Veterans, the newspaper reported.

Wilkie mostly avoided questioning about the report Wednesday. Sen. Patty Murray, D-Wash., said she had concerns about it but wouldn’t seek answers during the hearing. Instead, she told Wilkie she would later ask for written responses.

Sen. Mazie Hirono, D-Hawaii, spent the most time on the issue. In particular, she asked about part of the report that asserted Wilkie supported in the 1990s a proposal to require young women to finish high school as a condition of receiving welfare.

Under questioning from Brown, Wilkie promised that he would work for all veterans.

“You’ve been appointed by a very racially divisive president,” Brown said. “The VA secretary needs to serve all veterans despite race, ethnicity, gender and sexual orientation.”

Tillis, Wilkie’s former boss, defended him during the hearing, but said he should prepare for more scrutiny by the committee as VA secretary.

“Enjoy the honeymoon, because the floggings will be starting soon,” Tillis said. “You’re going to do a great job as secretary. You’ve got a keen insight into what works. I know you’re going to bring the intensity that’s necessary and that’s been lacking for a long time.”

The Senate Veterans’ Affairs Committee still must vote on whether to send Wilkie’s nomination to the Senate floor. A timeline for when the vote could occur was uncertain Wednesday.

Since the VA became a Cabinet-level department in 1989, there have been nine secretaries. All of them were unanimously approved by the Senate, meaning no senator has ever voted against a VA secretary nominee.