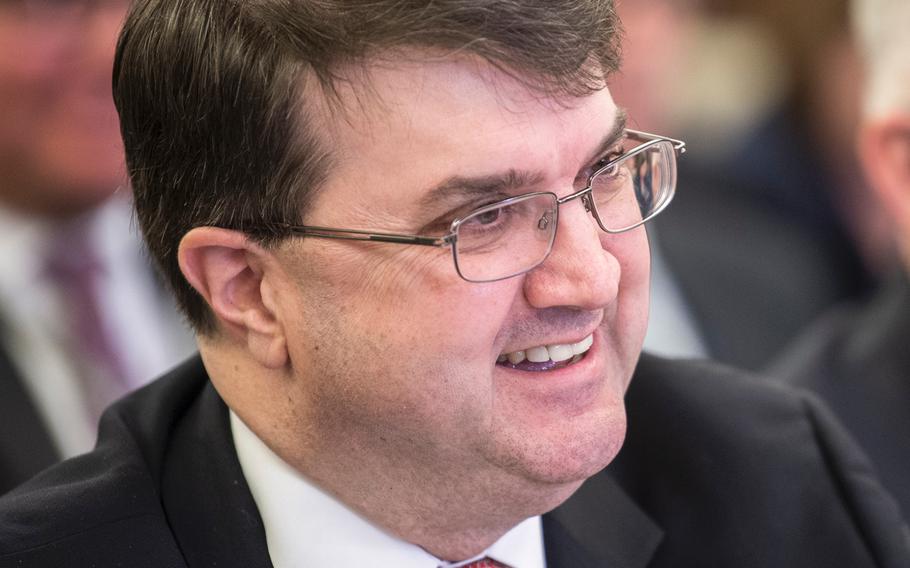 Buy Photo
Secretary of Veterans Affairs Robert Wilkie testifies before the Senate Veterans Affairs Committee on Tuesday, March 26, 2019, during a hearing on Capitol Hill in Washington. After the hearing, Wilkie answered questions about reports that he was seeking to become the next Defense secretary. “I’m very happy at VA,” Wilkie said. “I’m not planning on leaving anytime soon.” (Carlos Bongioanni/Stars and Stripes)

WASHINGTON — Department of Veterans Affairs Secretary Robert Wilkie pushed back Tuesday against reports that he launched an internal campaign to become the next secretary of defense.

His comments were directed to reporters following his testimony Tuesday morning to the Senate Veterans’ Affairs Committee.

Wilkie grew up at Fort Bragg, N.C., as the son of an Army artillery commander. He served as an officer in the Navy and Air Force before working as a senior leader at the Pentagon under former secretaries of defense Robert Gates and Donald Rumsfeld.

Wilkie also worked on Capitol Hill, including as a senior adviser to Sen. Thom Tillis, R-N.C. He most recently worked as Mattis’ undersecretary of defense for personnel and readiness.

He was confirmed as VA secretary in July and is responsible for shepherding the agency through what he’s described as the “most transformational period” in the department’s history.

“I’m seeking to make sure that I’m as good a VA secretary as possible,” Wilkie said Tuesday.

Trump has yet to appoint a permanent replacement for Mattis. Patrick Shanahan, Mattis’ deputy and a former Boeing executive, is serving in the role as acting defense secretary.

In addition to reports that he pushed to be Pentagon chief, Wilkie denied Tuesday that he has plans to run for an elected office.

Wilkie was adamant when asked whether he had at one point contemplated a campaign to represent North Carolina’s 9th congressional district.

The results of November’s midterm elections in that district were tossed out following an investigation into election fraud, and new general and primary elections were scheduled for May and September. Republican Mark Harris, who nearly won the seat before the results were dismissed, announced he would not run again.

The deadline for candidates to file for the primaries was March 15.