VA reform bill passed by Congress seen as 1st step, not a cure 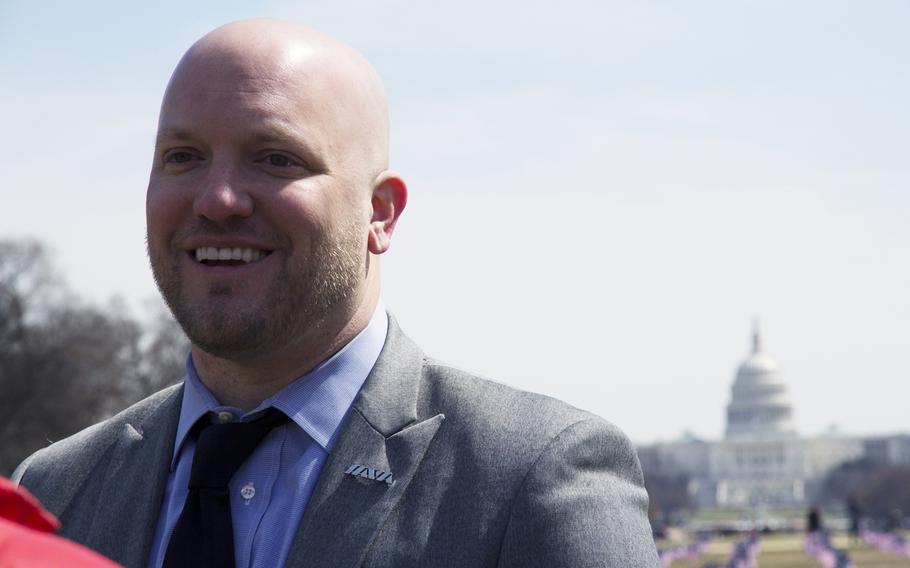 Paul Rieckhoff, director of Iraq and Afghanistan Veterans of America (IAVA), calls for the passage of a new bill aimed at stopping veteran suicides on the National Mall in Washington, D.C., on March. 27, 2014. IAVA planted 1,892 flags on the National Mall, each representing the number of veterans and servicemembers estimated to have committed suicide so far in 2014. (C.J. Lin/Stars and Stripes)

WASHINGTON — The hard-fought passage of a $16.3 billion VA reform plan by Congress on Thursday drew applause from veteran groups, but they also warned it is only a first step toward a needed overhaul of the nationwide health care system.

The bill was on its way to President Barack Obama on Friday and he was expected to sign it as early as next week after months of public outrage over dangerously long patient wait times at VA facilities and widespread records manipulation by staff.

“The passage of this bill through the Senate today is not a silver bullet but rather it is only a Band-Aid, and one that will soon fall off,” Paul Rieckhoff, CEO and found of Iraq and Afghanistan Veterans of American, said in a statement after the late-evening vote.

IAVA, which claims 270,000 members including veterans from America’s two most recent wars, is “glad and relieved” that an agreement was reached but said Congress should not be praised for finally addressing long-time problems in the VA health care system.

American Legion National Commander Daniel Dellinger did praise lawmakers for putting aside political differences to pass a bipartisan compromise bill. But he said the measure to decrease wait times by expanding veteran access to private care must only be temporary. A ermanent solution to the crisis in access must be found, he said.

“The VA reform package that passed overwhelmingly in the Senate Thursday night is an important step in the process to begin repairing systemic problems in the Department of Veterans Affairs,” Dellinger said in a release Friday. “But it is only one step, and only a beginning.”

Lawmakers have repeatedly warned that it will likely take years to turn around the deeply dysfunctional VA, which is the second largest federal agency and runs the nation’s largest integrated health care system. Each day, 200,000 veterans seek care in about 1,700 facilities.

The department reported Thursday that about 636,000 veterans have been waiting more than a month to get care at its hospitals and clinics. VA inspector general audits and congressional testimony over the past few months have revealed that staff attempted to cover up the long wait times and were awarded bonuses based on false treatment statistics.

“This bill is a beginning – not an end – to the efforts that must be taken to address this crisis,” Sen. John McCain, R-Ariz., who defended the overhaul bill on the Senate floor Thursday, said in a release. “Still, it includes some of the most significant changes to the VA in decades.”

The bill passed by Congress calls for $10 billion in emergency spending to let vets who cannot get a VA appointment within 30 days of a request or who live more than 40 miles from a VA health care facility seek treatment from private providers.

It aims to increase the capacity of the VA health care system by pumping $5 billion into hiring new doctors, nurses and other VA medical staff. Also, $1.27 billion would be spent on leases for 27 new medical centers in 18 states and Puerto Rico, according to a cost estimate released Wednesday by the nonpartisan Congressional Budget Office.

Congress would pay for about $4.46 billion of the price tag by capping VA employee bonuses to save $350 million per year, deferring planned reductions in housing loan interest rates and trimming other areas of the department budget, the CBO said.

Overall, the reform would cost U.S. taxpayers about $10 billion in new deficit spending over the coming decade, the agency found.

It is a compromise struck by Sen. Bernie Sanders, I-Vt., chairman of the Senate Veterans Affairs Committee, and his counterpart in the House Rep. Jeff Miller, R-Fla., after a month of tense debate, but it was almost undone by opponents on the Senate floor Thursday evening.

Fiscal hawk Sen. Tom Coburn, R-Okla., moved to block a vote and argued that spending billions on the VA would not solve an embedded culture of corruption and irresponsibility.

“The culture is one of looking good, protecting those in the VA and not protecting our veterans,” Coburn said. “You have to have a bill that fixes that. I don’t believe this is going to do it.”

He argued that for years, the VA budget has increased much faster than its workload, yet severe problems with getting veterans timely health care have grown worse.

Sen. Bob Corker, R-Tenn., who voted against the reform bill, said it would expand veterans’ access to outside health care for about three years with $10 billion but creates a “massive” unfunded liability after that. Sen. Jeff Sessions, R-Ala., also voted against it.