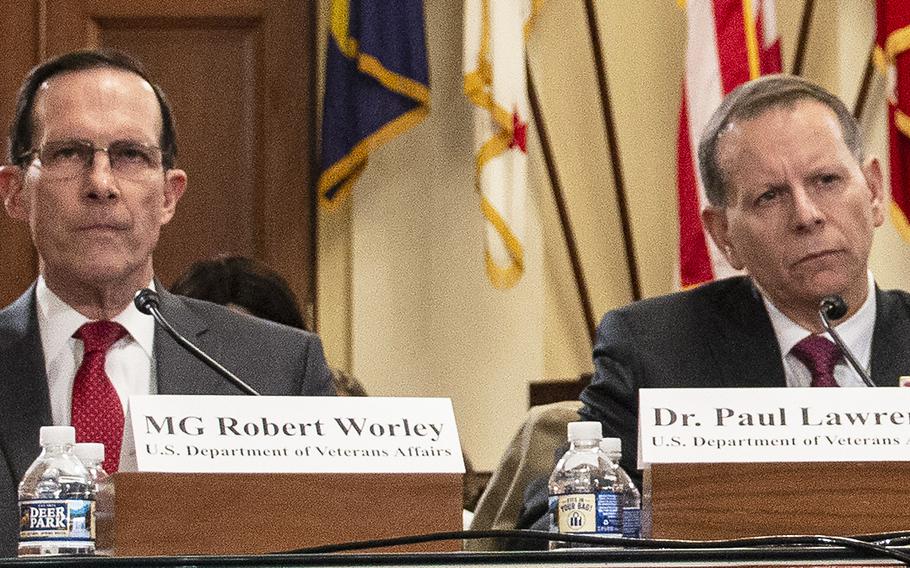 Blaming old computers and unanticipated software challenges, the Department of Veteran Affairs saw its pending claims inventory from Post-9/11 GI Bill participants peak in mid-September at 207,000, which was three times higher than normal for the start of a fall semester.

The sudden backlog caused payment delays of the housing allowance that student veterans rely on to pay monthly rent and other living expenses.

The backlog now is down two-thirds, to 73,000. But 11,000 of the remaining claims are more than 30 days old and 1,000 are more than 60 days old, violating the VA standard to process GI Bill claims within 28 days, officials conceded to the House veterans affairs’ subcommittee on economic opportunity this month.

VA officials in turn cited a web of aging and interconnected computer systems, but also a new law that added mind-boggling complexity to a GI Bill allowance, depending on where, when and how students use their benefits.

Paul R. Lawrence, VA’s undersecretary for benefits, vowed that GI Bill users won’t be inconvenienced by systemic payment delays again in the 2019 spring semester. But he also warned that housing allowance payments still might not be accurately calculated by then because the software challenges persist.

Testifying with Lawrence, officials responsible for administering GI Bill benefits, and others for reprogramming computers to ensure timely and accurate payments, said they underestimated the complexity changes directed by the Harry W. Colmery Veterans Educational Assistance Act signed into law in August 2017.

That law also is called the “Forever GI Bill” because it eliminated the 15-year time limit on using Post-9/11 GI Bill benefits for veterans given final discharges or releases from active duty on or after Jan. 1, 2013. It removed the same time limit for children of deceased servicemembers who became entitled to GI Bill benefits on or after that date, and for surviving spouses using the Fry Scholarship program.

However, to pay for these and other benefit enhancements, the new law also changed in two ways how the Post-9/11 housing allowance feature is calculated for new users to save billions of dollars. Indeed, the Congressional Budget Office estimates that GI Bill allowance savings will total $3.4 billion through 2027.

The Post-9/11 GI Bill allowance is set to match the military Basic Allowance for Housing rate for married enlisted members in pay grade E-5. That rate varies by housing locale and is adjusted annually to keep pace with local rental costs.

The first change made by the Colmery Act required that the allowance be based on where students physically attend classes rather than the location of colleges or schools where students are enrolled. So, if a college is headquartered in a city but students take courses at smaller town campuses or online courses from suburbia or rural residences, the allowance falls. Current GI Bill users, however, are protected from the change; it applies only to students who initially enroll in classes on or after Aug. 1, 2018.

The second allowance change also applies prospectively, to veterans who first use their GI Bill on or after Jan. 1, 2018. This change takes account of how Congress has dampened the value of military housing allowances in recent years by adopting a five-year plan to curb inflation adjustments to rates by a full percentage point per year. Congress had exempted the GI Bill stipend from this initiative. The Colmery law repealed the rate protection for new student veterans. Those who began using their GI Bill before Jan. 1, 2018, continue to receive the higher non-adjusted allowance rate for E-5, which the military no longer uses.

As late as July this year, VA officials had reassured lawmakers that despite the complexity of these changes, and rising difficulty making software changes across separate older computer systems, the changes would be made in time to avoid significant payment delays for the fall semester. That forecast was wrong. The House subcommittee this month pressed officials to explain why.

Rep. Jodey Arrington, R-Texas, its chairman, reminded Lawrence that four months ago VA promised delays would be short and would not significantly impact students. Yet some student veterans are “in pretty bad situations” from allowance delays “and we’re hearing from them.”

What particularly irked Arrington and his colleagues, he said, is that, after missing its own mid-August deadline to have software upgrades completed, VA refuses to set another deadline so lawmakers can hold the department to account.

“VA still does not know when they will be ready to deploy proper payments to GI Bill recipients,” said Arrington. “I find the delays simply unacceptable” particularly those “stretching over 60 days. Some of these guys are going to have some real hardship, maybe even personal family crises, as a result of this.”

Lawrence said VA continues “to work on getting this right.” Previously allowances were set using the schools’ facility codes for main campuses. The new law recognizes that students can earn multiple credits at different locations including with internships, externships, seminars and workshops. Zip codes of locations where students earn credits is the new way for setting allowances and software must capture the location where most semester credits are earned.

That requires new, more complex computations and it’s all “far more complicated than originally estimated,” Lawrence said. “We’re planning for the possibility we may not have the new software ready for the spring semester. Should that happen we’ll be prepared to process claims as we have been doing to ensure students continue to receive their allowances, and schools will receive their tuition payments. We will continue to do that for as long as necessary.”

Because of delayed software changes, Worley said, “we are paying incorrect housing to our beneficiaries. Depending on when they started school, some of those beneficiaries are receiving about $69 more than they should be getting because we haven’t applied the new DOD rate to them. Others who are existing students already are not receiving a less-than-1-percent increase that was implemented with the DOD rates” and should have been applied to student allowances Aug. 1.

“We don’t have the breakout of exact numbers as to which is which,” said Worley. “But we will not go back and try to recover the overpayments once the [information technology] fix is in. And where we have underpaid our beneficiaries, we will make them whole at the time the IT fix goes into effect.”

When that will occur is unclear. Lawrence, Worley and the IT team supporting the GI Bill said software solutions to complex rate calculations are still being written for install across several legacy computer systems and then testing, a process that is months old and could take several more months to complete.

“This fall 460,000 veterans went to school using the GI Bill. The allegation of widespread veteran homelessness due to missed payments is false,” he said.

“We have received very few what I would call confirmed cases of anyone actually being evicted” because they couldn’t pay their rent, Worley said.

Any veteran experiencing financial hardship because of unpaid GI Bill claims can request expedited claim processing and get a check or bank deposit within three to five days, Worley said. They should call 1-888-GIBill1 or (888) 442-4551.