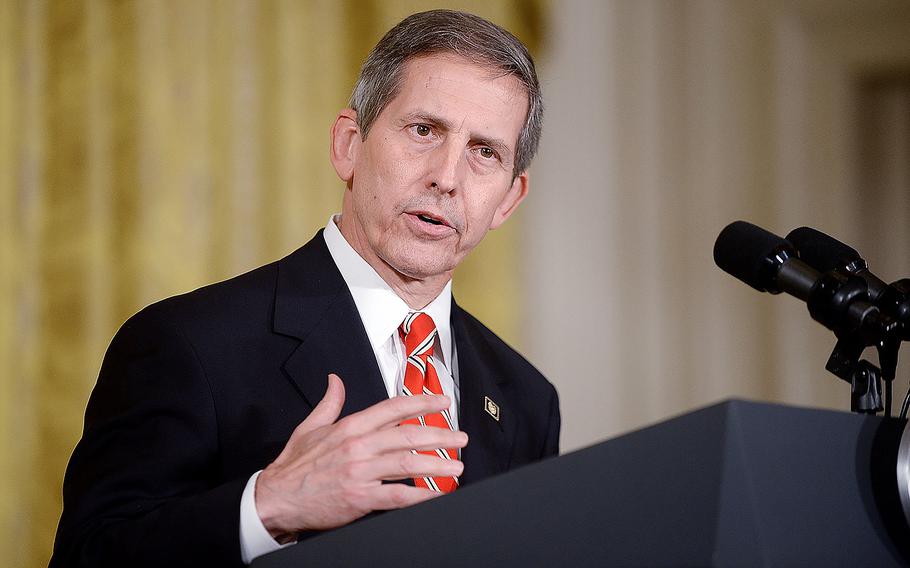 An additional 160,000 veterans became eligible Dec. 1 to receive VA-paid medical care from civilian health care providers, the result of changes to the Choice Act of 2014 voted several months ago as Congress seeks to ease the flood of complaints still swirling around that poorly designed law.

Meanwhile, Department of Veterans Affairs officials have unveiled a costly, complex and phased plan to consolidate the Choice program with a “patchwork” of other purchased care initiatives enacted over the years, even as VA hospitals continue their own referral agreements with local community providers.

The resulting hodgepodge of purchased care deals and requirements, in the wake of the Choice Act and rising demand for outside care, has created an administrative nightmare for VA care coordinators and sown confusion for many veterans, VA staff and local health care providers. For the most part, Choice operates nothing like lawmakers or veterans envisioned.

Sloan Gibson, deputy VA secretary, appeared before the Senate Veterans Affairs Committee on Tuesday to explain the ambitious New Veterans Choice Program to be phased in over several years as well as changes made Dec. 1 to the current Choice program.

Before December, enrolled veterans gained automatic eligibility for Choice if they resided more than 40 miles from any VA medical facility. The Surface Transportation and Veterans Health Care Choice Act, now implemented through VA regulation, makes the eligible pool deeper. Vets now have access to Choice if they reside more than 40 miles from a VA facility staffed by a primary care physician at least 36 hours a week.

This opens Choice to 160,500 more veterans enrolled in VA care.

Another Dec. 1 change lifts a requirement that to qualify for Choice a veteran must have enrolled in VA health care by Aug. 1, 2014. That date is removed, making 26,000 recent enrollees eligible for Choice automatically because they live more than 40 miles from VA primary care.

Other enrolled veterans still are eligible to use the Choice program if:

Their local VA facility tells them they cannot schedule an appointment within 30 days of the date their physician determines they need to be seen, or within 30 days of the date the veteran wants to be seen if the physician specifies no date, or  They need to travel by air, boat or ferry to the VA medical facility closest to their home, or They face an unusual or excessive burden in traveling to the closest VA medical facility based on geographic challenges, environmental factors, a medical condition, the simplicity or frequency of care needed or whether an attendant is needed. VA promises to train local VA medical staff to work with veterans to determine if they are eligible for any of these reasons, or They live in a state or territory with no full-service VA medical facility. That includes Alaska, Hawaii, New Hampshire (except for those who live within 20 miles of the White River Junction VA medical center) and U.S. territories except Puerto Rico. Vets can verify Choice eligibility and learn more about the program by calling 1-866-606-8198 or visiting the website: www.va.gov/opa/choiceact

“We’re making some good progress on Veterans Choice,” said Sen. Johnny Isakson, R-Ga., committee chairman. “For all the bad stories you hear about, they’re mostly stories of things that happened in the past that we’re trying to correct, not things happening today.”

But senators from rural states including Alaska, West Virginia and Kansas expressed bitter disappointment with how Choice operates today.

Isakson and the committee’s ranking Democrat, Sen. Richard Blumenthal of Connecticut, agreed the plan to consolidate purchased care leaves Congress with many critical decisions to make and a lot of money at stake.

The task of combining the “patchwork of programs we have now is certainly an urgent one and apparently a very expensive one — $1.9 billion is a lot of money to spend on organization,” said Blumenthal. “I want to know how that money is necessary and specifically what it will be used to do.”

Though VA today refers more veterans to private-sector care than ever before, Gibson said, “we’re saddled with a confusing array of programs, authorities and mechanisms that greatly complicate the task of ensuring veterans get the care they need, when and how they need it.”

“Each has its own requirements, different eligibility rules, reimbursement rates, different methods of payment and different funding routes,” Gibson said. “It’s all too complicated — for veterans, for community providers and for VA staff as well.”

On a recent visit to the VA hospital in Charleston, S.C., Gibson told the committee, he “watched what our staff was going through in order to set up a Choice referral. It would dumbfound you!”

The consolidation plan, he said, will focus on five goals: Establishing a single set of eligibility criteria based on distance, wait time and availability of VA care, and expanded outside urgent care too; improving access by simplifying authorization and referral processes; partnering with federal, academic and community providers to offer a tiered provider network; better coordination of care by deploying an improved health information exchange; ensuring prompt payment with better billing and claim processing.

Major veterans organizations endorsed the plan, though some cautioned a lot of money could be wasted if not designed and executed well.

Only Concerned Veterans for America, a group funded by the billionaire Koch brothers who oppose big government and sustaining a large bureaucracy to provide veterans health care, attacked the plan as grandiose and wasteful.