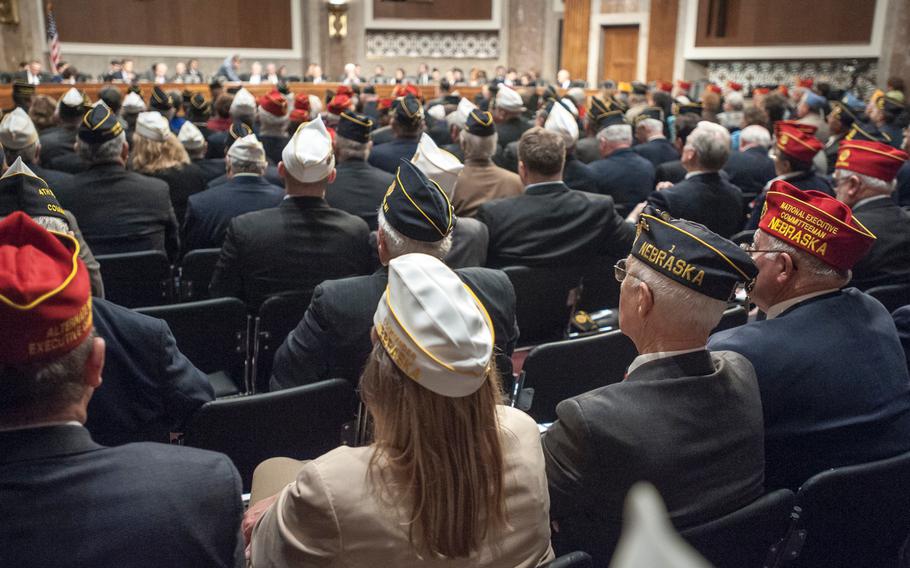 Veterans attend a presentation at the Capitol in Washington, D.C., on March 1, 2017, as lawmakers heard from American Legion representatives about veterans' issues. VA Secretary David Shulkin on Wednesday, June 14, said that a Veterans Choice Program fund that had approximately $2 billion in it in March will likely be used up by mid-August. (Carlos Bongioanni/Stars and Stripes)

Two starkly different styles of governing were seen this week on issues with potentially profound impact for groups of military folks and veterans.

On Capitol Hill, seasoned lawmakers worked with veteran service organizations to forge an intricate compromise that will funnel $2.1 billion in emergency dollars into the Department of Veterans Affairs “Choice” plan to ensure that vital community-based health care option keeps operating.

The same deal would extend some temporary special VA fees, which were set to expire in 2024, out to 2027. This is to free up budget dollars to strengthen the VA direct care system with faster hiring authorities and new building leases to bring VA health care nearer to patient populations.

As leaders of the House and Senate Veterans’ Affairs committees finalize bipartisan negotiations, President Donald Trump, a commander in chief criticized as having impulse-control issues, tweeted a surprise ban on transgender personnel serving in the military “in any capacity.”

The policy shift came in three tweets, a total of 60 words. Trump said he had consulted with “generals and military experts” and decided the armed forces “cannot be burdened with the tremendous medical costs and disruption that transgenders in the military would entail.”

The announcement left the Department of Defense effectively speechless, referring media queries to the White House for details where Trump’s spokesman had none. Defense Secretary Jim Mattis, vacationing in Washington State, seemingly was unarmed to explain through his staff what had just occurred or how it would affect thousands of transgender personnel already serving openly, including in theaters of war.

By day’s end the clearest guidance came from a defense official, speaking on background, who said department policies on currently serving transgender personnel would remain in effect, for now.

“A tweet is not policy,” this official explained. “I know that’s the culture we’ve moved into. But we still have to go by a formal [procedure] to make any changes.” Here are more details on both developments:

In mid-July Rep. Phil Roe, R-Tenn., chairman of the House Veterans’ Affairs Committee, thought he had a plan ready to fund Choice for six months, time enough to review a new VA initiative to reform Choice that VA promises to have ready by October. Shulkin said that plan will make Choice the centerpiece of all VA community-based care and put VA providers back in charge of private-sector referrals, based on individual patient needs.

Congress established Choice in 2014 as a temporary response to a department-wide patient wait list scandal. It created a $10 billion fund of emergency dollars to pay for it, rather shifting around money inside VA.

Roe’s proposal last week to extend Choice didn’t get the support he anticipated because it didn’t rely again on emergency budgeting authority. Roe proposed instead creating funding offsets inside future VA budgets, by delaying for three years, from 2024 to 2027, scheduled expirations of special fees that Congress had imposed on VA-guaranteed home loans and pension cuts it had made to Medicaid-eligible veterans in nursing care facilities.

A coalition of veteran groups protested, arguing the offsets amounted to benefits cuts, which would be reasonable for funding new benefits, but not acceptable to pay for health care the government is obligated to provide, either by hiking VA budgets or using emergency budgeting authorities.

Veteran groups and supporters also argued that Congress needed to properly fund and support the VA direct care system so it can address rising patient demand rather than rely increasingly on VA-paid private-sector care.

“If you only fund community care and don’t put [enough] money into the VA system to correct problems that lead to having to use community care, that will suck resources the VA needs away, and eventually lead to a VA [health care system] that will start to collapse,” warned Garry Augustine, executive director of Disabled American Veterans.

The veteran groups succeeded in blocking Roe’s plan on the House floor. Roe and Sen. Johnny Isakson, R-Ga., chairman of the Senate Veterans’ Affairs Committee, began to work immediately with their committees’ ranking Democrats, Sen. Jon Tester, of Montana, and Rep. Tim Walz, of Minnesota, on a new deal. This one would keep Choice running into next year with $2.1 billion in emergency funding, and use benefit offsets Roe had eyed for Choice to expand patient capacity in the VA direct care system. It would do so through new building leases and a host of other initiatives.

“This will allow VA to bring new facilities closer to where veterans live, and those facilities will bring increased convenience and access to VA health care,” the secretary said. Other initiatives will make it easier “to hire the most sought after medical specialists as well as establish innovative human resources programs to strengthen workforce management,” he added.

He urged swift passage by both chambers before their August recess.

Trump’s tweets: The president’s sudden policy shift was roundly condemned by transgender support groups, Democrats in Congress and many key Republicans too, though some conservatives praised the move.

Sen. John McCain, R-Ariz., chairman of the Senate Armed Services Committee and newly diagnosed with brain cancer, described the tweets as unclear and “yet another example of why major policy announcements should not be made via Twitter.”

McCain said many transgender individuals serve honorably today. Any American who meets medical and readiness standards should be allowed to serve and not be forced out, he said, if able to “fight, train and deploy.” They “should be treated as the patriots they are,” he added.

Recruiting of transgender individuals was to begin in July but Mattis delayed that start six months for the department to conduct a study on transgender issues including medical obligations and impact on readiness.

McCain said no new policy decision “is appropriate until that study is complete and thoroughly reviewed by the Secretary of Defense, our military leadership and the Congress.” He promised that his committee would follow the issue closely and conduct oversight of any policy changes.

Some news outlets reported that Trump tweeted his opposition to transgender servicemembers to prevent an amendment on the same issue from slowing passage of a House appropriations bill that has funds to start of construction of his promised wall across the U.S.-Mexican border.