VA budget would climb to nearly $200 billion under Trump proposal 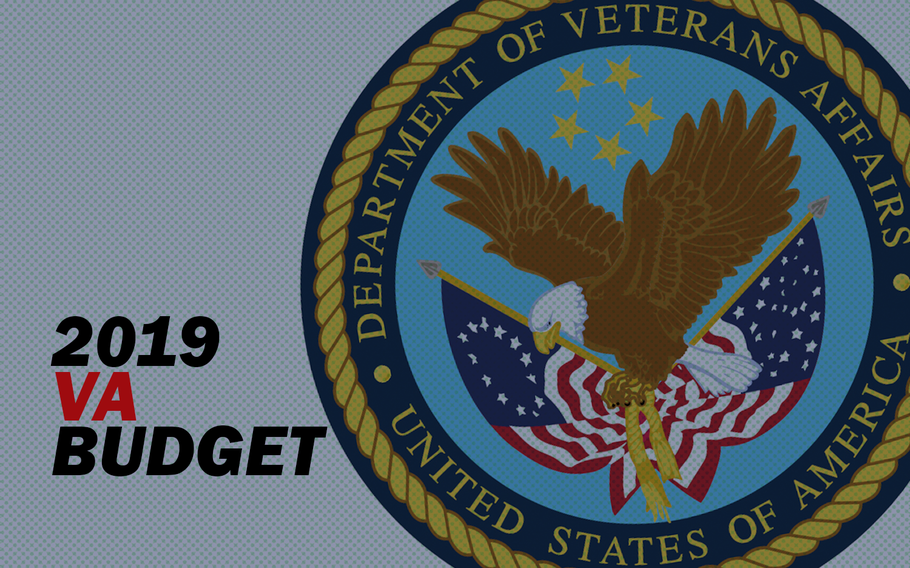 WASHINGTON — The Department of Veterans Affairs would get another multibillion-dollar increase in 2019 under President Donald Trump’s new budget proposal, which includes cuts to domestic agencies and social programs while boosting spending for defense, homeland security and the VA.

The proposal, released Monday, asks for $198.6 billion for the VA for fiscal 2019 – significantly more than the $186 billion budget that Congress is working to approve for the current fiscal year. It places emphasis on mental health care, information technology, access to private-sector medical care and efforts to stop waste, fraud and abuse.

“The 2019 budget reflects the strong commitment of the president to provide the services and benefits that our nation’s veterans have earned,” VA Secretary David Shulkin said in a written statement.

Trump’s budget proposal, an overview of priorities for the administration, was shared with Congress on Monday. Shulkin is expected to answer questions about the request Thursday morning during a hearing of the House Committee on Veterans’ Affairs.

While the proposal includes an overall increase for the VA, it includes ideas to cut millions of dollars from specific programs. According to the budget document, the savings would be used to implement expected reforms to the VA Choice program, which allows veterans to receive medical care in the private sector.

The White House is again offering a controversial proposal to round-down cost-of-living adjustments to the nearest dollar amount for all veterans who receive disability compensation. The practice was standard until 2013, and there have been numerous attempts to reinstate it.

It’s an unpopular idea among veterans service organizations that don’t want to see any decrease to veterans’ benefits, but the White House argues the round-down would have minimal effect on veterans. The budget document estimated the change would cost each veteran about $12 a year and would save the VA $34 million in 2019 and nearly $2.3 billion over the next 10 years.

The proposal states the COLA round-down would be used to “partially offset the costs” of replacing the VA Choice program. Lawmakers are negotiating legislation to overhaul the program after political infighting stalled the debate late last year.

The budget also proposes slashing the amount the VA will pay for student veterans to complete flight training at public schools. Late last year, multiple veterans organizations expressed concerns to lawmakers that some flight programs were targeting GI Bill recipients and overcharging them.

Trump’s budget proposal imposes a spending cap of $22,800 per year for each student veteran participating in a flight program. It’s expected to save the VA more than $500 million over the next 10 years.

Other cost-saving measures include simplifying veterans’ net-worth calculations and raising the threshold for the VA to perform medical examinations when determining a veteran’s eligibility for disability compensation. The document states the VA unnecessarily performed 180,000 medical exams in 2016. Those proposals would save about $1.2 billion over the next decade.

The budget also proposes changes to the VA’s vocational rehabilitation and education program. It would extend the benefits from 18 to 24 months and require states to offer lower tuition rates to student veterans. The changes would increases VA costs in fiscal 2019 by $72 million but lead to savings of $206 million by 2028.

Trump’s VA budget includes $511 million for gender-specific health care for women, $510 million for caregivers’ benefits, $172.1 million for the Office of Inspector General to increase oversight efforts and $727 million for medical and prosthetics research. Programs targeting homeless and at-risk veterans would get $1.8 billion.

Mental health care, Shulkin’s top clinical priority, would see a spending boost of $468 million over 2018, for a total $8.6 billion. Information technology -- a problem area for the VA -- would get a $129 million increase over the current fiscal year, for a total $4.2 billion.

Joe Plenzler, spokesman for the American Legion, said the organization approved of Trump’s proposed increases to the VA and Department of Defense.

If approved by Congress, the budget would be another in a series of significant spending increases for the VA in the past decade. In 2009, the budget totaled $90 billion, and by 2012 it had grown to $130 billion. The approved level for 2017 was nearly $180 billion.