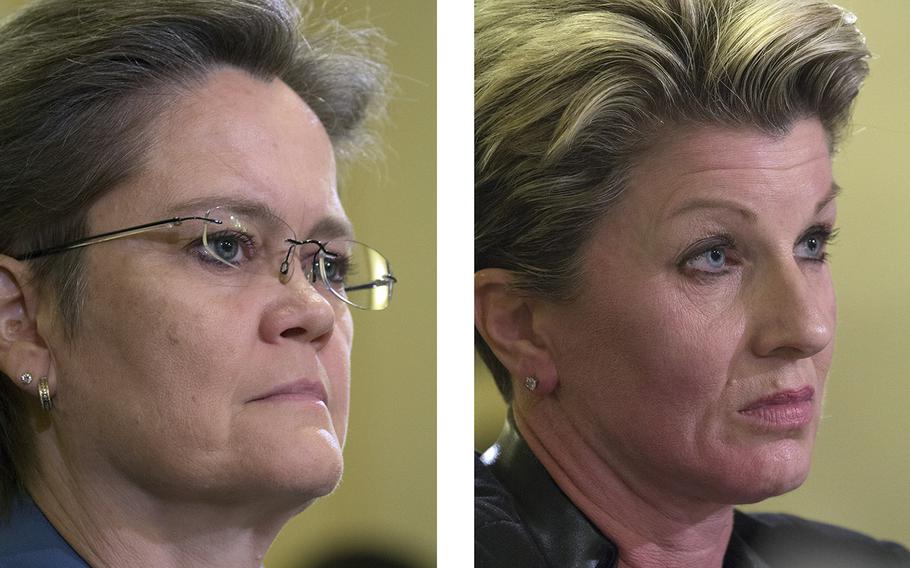 WASHINGTON — The Department of Veterans Affairs refueled outrage Thursday over its light handling of two corrupt senior executives when the agency acknowledged that it had botched its disciplinary actions against the two officials, forcing the VA to rescind their demotions and start the punishment and appeals process again.

The agency announced last month that it was demoting and transferring Diana Rubens and Kimberly Graves after an investigation determined that both women had manipulated the hiring system to carve out their jobs of choice and collect huge relocation bonuses meant to entice employees to take hard-to-fill jobs.

Rubens and Graves received more than $400,000 in total relocation bonuses.

Lawmakers, veterans advocates and other watchdog groups lambasted the agency for not firing the women and for not recouping the money they received through their scheming.

On Thursday, the VA issued a statement saying that during the processing of the demotions, an administrative error had occurred and one of the five binders of evidence had inadvertently been omitted from paperwork provided to the two women.

“Not only is it impossible to fire employees at the VA, but they cannot even effectively demote employees for just cause,” Sen. Johnny Isakson, R-Ga., who chairs the Senate Veterans Affairs Committee, said in a statement.

“This highlights yet again the desperate need for accountability reform at the VA,” he said, adding that the agency “has so far either been incapable of or unwilling to adequately hold bad actors appropriately accountable.”

The department had to rescind and reissue the proposed demotions to allow the women an opportunity to respond to the omitted evidence, the VA statement said, adding to the cascade of dismay over the VA’s handling of the case.

“It seems VA’s incompetence knows no bounds,” said Rep. Jeff Miller, R- Fla., who chairs the House Committee on Veterans Affairs. “By now, it’s clear to nearly every objective observer that VA’s top officials don’t know how to properly discipline employees. What remains unclear, however, is whether they are even interested in doing so.”

The VA Inspector General’s office issued a report in September finding that Rubens and Graves had “inappropriately used their positions of authority for personal and financial benefit” by arranging the transfer of subordinates whose jobs they wanted and then volunteering for the vacancies.

The report had recommended that the VA deputy secretary consult with the VA’s Office of General Counsel to determine whether Rubens and Graves should have to repay their relocation expenses. Miller said last week that he’d been informed that the VA’s top lawyer determined the agency did not have the legal authority to recoup the money even after acknowledging that the women had abused their offices.

On Monday, Miller introduced a bill that would allow the VA secretary to recoup relocation expenses paid to any VA employee at any time if the secretary deems it necessary, and would require that any appeal by that employee be decided by a third-party federal entity.

The bill was introduced in direct response to the decision on Rubens and Graves. Miller said that the only way the VA could reform itself into an organization worthy of its veterans was to not tolerate corruption within its ranks.

After their demotions were announced Nov. 20, Graves and Rubens were reassigned. Both women appealed their demotions and their transfers were stayed pending the outcome. It was during the review of the appeals that VA counsel discovered the administrative error.

The department is reinitiating the demotions, the VA statement said. Once that paperwork is in, Graves and Rubens will have five business days to respond to the additional evidence before a decision is made on their demotions. If the demotions stand, the women can reinitiate their appeals, the VA said.

Miller said the VA is showing no real signs of reform, even in the wake of serious scandal in which facilities had maintained secret wait lists for doctor appointments, leaving veterans languishing for months and sometimes years without care.

This latest error by the VA further detracts from the agency’s credibility, he said. “This is an absolutely egregious mistake, and right now it’s incumbent upon VA leaders to do two things: explain to taxpayers, veterans and Congress who will be held accountable for this failure and outline its plan for finally getting serious about accountability at the department.”