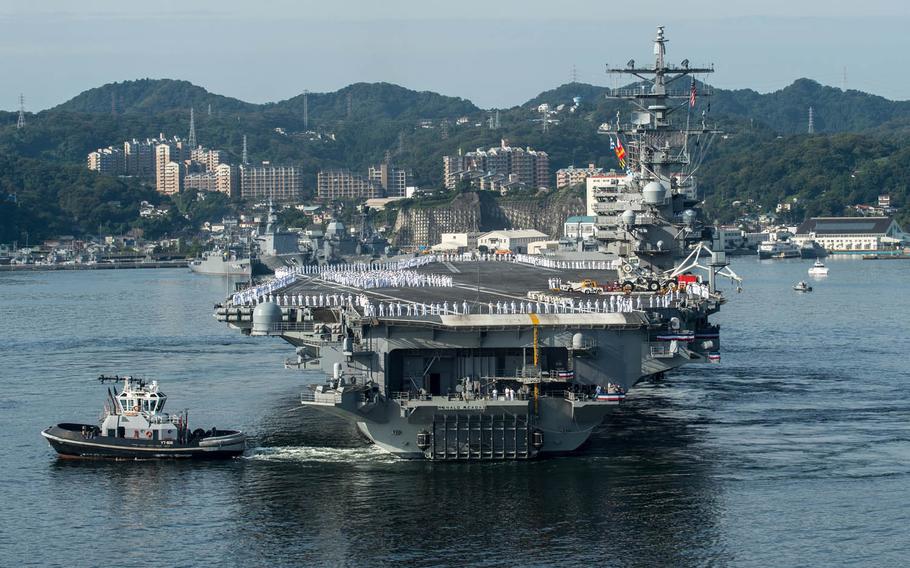 The aircraft carrier USS Ronald Reagan arrives at Yokosuka Naval Base, Japan, Oct. 1, 2015. The nuclear-powered carrier was the focus of a radiation-leak disaster exercise between the U.S. Navy and Japanese government this week in Yokosuka. (Kevin V. Cunningham/U.S. Navy)

YOKOTA AIR BASE, Japan — The nuclear-powered aircraft carrier USS Ronald Reagan was at the center of a radiation-leak disaster exercise between the U.S. Navy and Japanese government this week in Yokosuka, Japan.

The exercise simulated the leakage of a small amount of radioactive cooling water from the carrier, Japanese broadcaster NHK reported Wednesday. Officials rehearsed information-sharing methods — in which the Navy communicates radiation levels to Yokosuka City Hall, which then releases those figures to the public — in case such an incident occurs.

Last month, Japan revised regulations for ordering residents to evacuate in the event a nuclear-powered aircraft carrier leaks radiation, the report said. A threshold of 100 microsieverts — the unit measurement for a dose of radiation — released per hour was changed to 5 microsieverts. The average person safely absorbs about 3.65 millisieverts of radiation annually, according to a PBS report.

Nuclear power has been a controversial topic in Japan since a devastating earthquake and tsunami triggered the Fukushima Dai-ichi nuclear power plant meltdown in 2011. A March 2014 poll conducted by the Asahi Shimbun showed that 59 percent of Japanese opposed restarting nuclear reactors that were shut down after the meltdown; 77 percent said they would support a plan to phase out nuclear energy. Two plants went back online earlier this year.