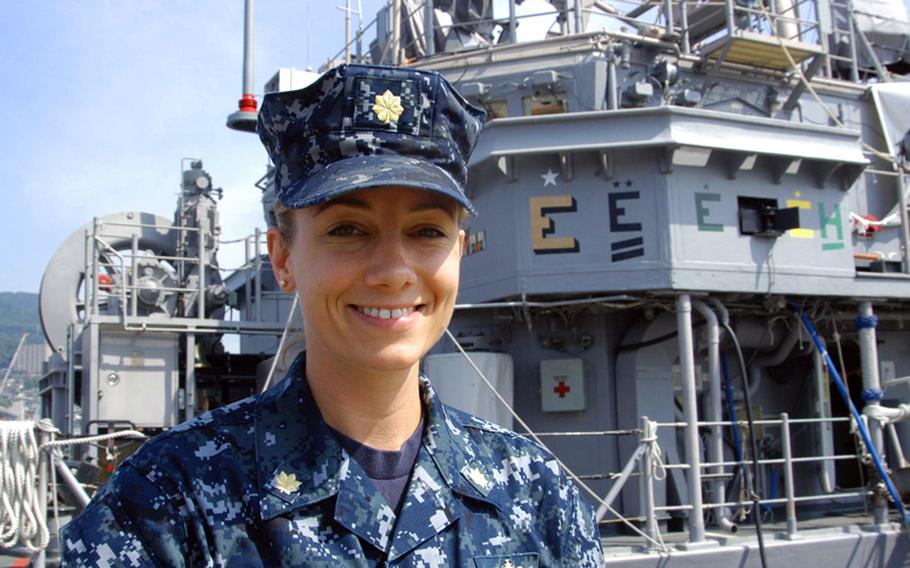 Buy Photo
Despite enormous strides made by women in the Navy in the past 20 years, crewing a mine countermeasures ship remains one of the last positions to be integrated. Lt. Cmdr. Suzanne Schang of the USS Patriot is one of the first women to rise to command a forward deployed mine ship. Here she poses in front of the golden E for five consecutive years of excellence. (Matt Burke/Stars and Stripes)

Buy Photo
Despite enormous strides made by women in the Navy in the past 20 years, crewing a mine countermeasures ship remains one of the last positions to be integrated. Lt. Cmdr. Suzanne Schang of the USS Patriot is one of the first women to rise to command a forward deployed mine ship. Here she poses in front of the golden E for five consecutive years of excellence. (Matt Burke/Stars and Stripes) 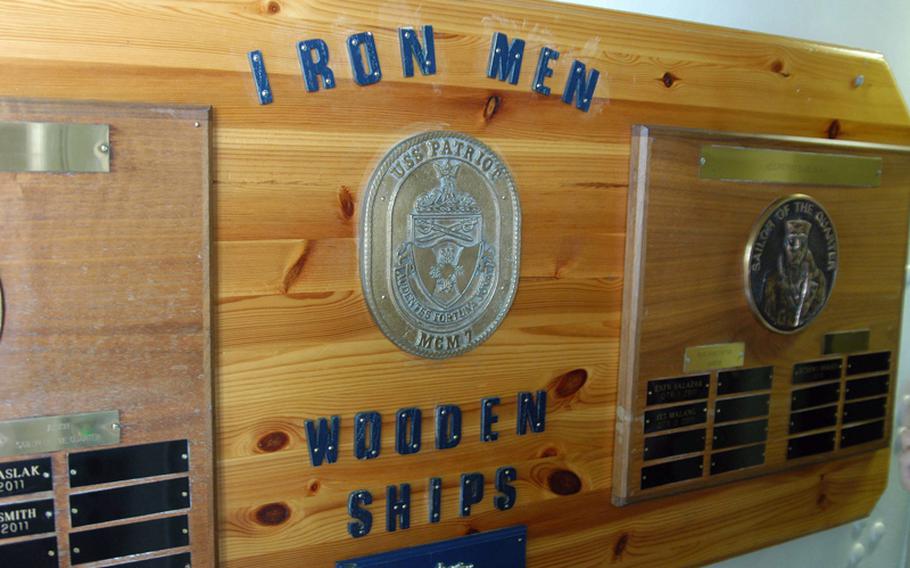 Buy Photo
Despite enormous strides made by women in the Navy in the past 20 years, crewing a mine countermeasures ship remains one of the last positions to be integrated. Lt. Cmdr. Suzanne Schang of the USS Patriot is one of the first women to rise to command a forward deployed mine ship. A plaque outside her quarters recognizing the ship&#39;s top sailors shows the culture that many women need to overcome. (Matt Burke/Stars and Stripes)

SASEBO NAVAL BASE, Japan &mdash; Lt. Cmdr. Suzanne Schang is used to being &ldquo;one of the guys.&rdquo; She had no choice.

During her 10-year career, Schang has served on five ships. Four of them have had all-male crews, except for female officers in the wardroom.

So, it seemed only natural when the 32-year-old skipper became the first female commander of the USS Patriot, a wooden-hulled, mine countermeasures ship, in April.

Women in the Navy have come a long way since Congress repealed the naval combat ship exclusions in November 1993. And while there has been much fanfare about the Navy&rsquo;s upcoming integration of women on submarines early next year, little has been said about the mine ships, which are still largely part of the boys club.

Not that it matters to Schang, who credits her rise through the ranks to hard work, a carefully calculated career path and some terrific advice from another strong woman &mdash; her mom.

&ldquo;I do feel extremely blessed to live in a country where I have the opportunity to serve in this capacity,&rdquo; Schang said. &ldquo;Being a &lsquo;daughter of Seventh Fleet,&rsquo; I am directly involved in building partnerships with our allied navies in the region. Therefore, I see firsthand the disparities between the opportunities and respect afforded females in the various countries.

&ldquo;Just to be able to get a job and support myself is something I value very highly,&rdquo; she said. &ldquo;But to be 32 years old, female and the captain of a warship in service of my country is more of an amazing and unique opportunity than I could have ever hoped for.&rdquo;

Schang has been blazing a trail since graduating at the top of her class at Virginia Tech&rsquo;s Corps of Cadets School in 2001.

Having her choice of assignments, she ended up at Naval Station Pearl Harbor in Hawaii as an engineer on the destroyer USS Hopper. There, the junior officer was able to get all of her major qualifications &mdash; engineering officer of the watch, officer of the deck and surface warfare officer &mdash; completed during her first tour, a significant accomplishment.

Since she didn&rsquo;t spend much time on the bridge of the Hopper, she sought a navigator position onboard the USS Vincennes for her next position. Based out of Yokosuka Naval Base, Japan, Schang served as the cruiser&rsquo;s department head of Navigation and Administration while only a lieutenant junior grade, she said.

&ldquo;I figured if I took a navigator tour, then I would get to spend a lot of time on the bridge and do the kind of core competency things that the Navy is going for,&rdquo; Schang said. &ldquo;You have to be able to drive a ship and get it to the mission before you can execute it.&rdquo;

After some &ldquo;shore leave&rdquo; to obtain a master&rsquo;s degree in business administration from the Naval Postgraduate School in Monterey, Calif., Schang was back in the Navy&rsquo;s 7th Fleet, this time aboard the USS John S. McCain in Yokosuka serving as the operations officer, a position she held from June 2008 to December 2009.

&ldquo;I keep coming back to 7th Fleet because I just love it over here,&rdquo; she said. &ldquo;I was reading recently that approximately a quarter of the world&rsquo;s traded goods go through these waters, and I&rsquo;m very passionate about the missions that we do out here.&rdquo;

After that, she became executive officer of the Patriot, and eventually, its commander.

Despite being the only woman on board, Schang said that she has been too focused on her job over the years to look at her career and the challenges she has faced through the filter of gender. That&rsquo;s something she&rsquo;ll reserve for retirement.

However, it is hard for her to forget the fact that, not long ago, women were barred from combat ships.

&ldquo;In order to get the job done, I try very hard not to focus on the female aspect of it because I&rsquo;m a sailor, I&rsquo;m a U.S. naval officer, and right now I&rsquo;m the commanding officer of this ship. And that&rsquo;s the most important thing,&rdquo; she said during an interview in her quarters, with her crew bustling around the decks. &ldquo;And that&rsquo;s what I try to focus on and keep my guys&rsquo; heads in the game for that, as well. I think the gender issue is not an issue.&rdquo;

Things move at an accelerated pace being deployed overseas, she said, which hasn&rsquo;t allowed her time to think of what it means to be one of the trailblazing woman in the Navy like retired Navy Cmdr. Darlene Iskra, the first woman to command a commissioned vessel, or Rear Adm. Nora Tyson, the first to command a carrier strike group.

Is she a trailblazer?

Has it been interesting?

Has it been challenging?

&ldquo;Yea, it has, but not in any sort of heinous way,&rdquo; Schang said.

&ldquo;It&rsquo;s been more interesting than anything else. &hellip; Probably at the end of my career I&rsquo;ll take a look back at everything and I&rsquo;ll be able to put it into words.&rdquo;

Schang said that one observation she has made about being a female onboard a ship full of men has been that her best professional relationships, whether with subordinates, peers or Navy brass, have been with servicemembers who have positive female relationships in their lives &mdash; with a mother, sister, child, girlfriend or spouse, she said.

&ldquo;They respect, like and have good relationships with the women in their lives,&rdquo; Schang said. &ldquo;That&rsquo;s just something that I noticed throughout my 10 years. I&rsquo;m not saying its causal or anything like that, but I have very solid, positive, professional relationships with a number of people, and that&rsquo;s one thing that I&rsquo;ve noticed.&rdquo;

She acknowledges that it would be good to have another woman onboard for a similar perspective, but she doesn&rsquo;t mind the solitude. &ldquo;It&rsquo;s lonely in this position anyways,&rdquo; she said.

Schang grew up modestly in a townhouse in Blacksburg, Va., in a single-parent home with her mother, Beth, and her younger brother.

She didn&rsquo;t always aspire to be a naval officer. She wanted to be a veterinarian, but with money being tight, her mother &mdash; a former sailor &mdash; took her to a Navy recruiter while she was in high school to show her another option.

While growing up, Beth Schang treated her children like adults to prepare them for the real world, something the second-generation sailor would carry with her forever, even at sea. Beth Schang, whom Suzanne calls her role model, also taught her children compassion.

&ldquo;She raised me and my brother &mdash; she&rsquo;s my best friend,&rdquo; Schang said. &ldquo;She is the most compassionate person that I know.&rdquo;

Schang took her mother&rsquo;s advice recently and reached out to Kasey Beernink, a recent Tech graduate chosen to be one of the first female officers on a nuclear submarine.

Schang told Beernink that she is a trailblazer who&rsquo;s paving the way for female sailors and officers. She also shared with the young officer her philosophy of always being a professional and keeping an eye toward accomplishing the mission.

&ldquo;Focus on the mission,&rdquo; Schang wrote to the young ensign. &ldquo;Make no mistake about it, you are in a male-saturated environment, and unlike most other professions you live and work and play (visit liberty ports) with your co-workers in very tight living quarters doing very difficult and brainy stuff. If you make the mission &mdash; your education and later running the sub &mdash; the focus of your efforts, then distractions like gender differences will fall from importance, as they should.&rdquo;

Beth Schang said it&rsquo;s just like her daughter to think of others.

Schang would read to local public schoolchildren while in postgraduate school in Monterey and started fitness programs for them. She also bought her mother a horse several years ago to replace one she had been forced to give up many years before.

&ldquo;She likes to surprise and delight people,&rdquo; Beth Schang said. &ldquo;She&rsquo;s got that sparkle. You can feel the energy change when she enters a room in a positive way. She&rsquo;s my hero, honestly.&rdquo;

Beth Schang said she believes her daughter feels honored to lead the men of the Patriot and is comfortable in going to the men under her command to ask them to teach her the nuances of their respective jobs.

According to the crew, Suzanne Schang is tough but approachable and has helped improve the overall operations and effectiveness of the ship.

She set the tone for her command nearly two months into the job when she was faced with disciplining six sailors found guilty at Captain&rsquo;s Mast in a May hazing incident. They would go on to face separation from the Navy.

Schang said that her leadership style is simple: Be tolerant of honest mistakes, but not of people who knowingly break the rules or disobey orders.

&ldquo;If you&rsquo;re not making any mistakes, then you&rsquo;re not trying hard enough,&rdquo; Schang said. &ldquo;But I have very little patience for professionals who know something is wrong and do it anyways.&rdquo;

Her executive officer, Lt. Jonathan Hopkins, agreed. &ldquo;I think the captain is very professional,&rdquo; he said. &ldquo;We both have a common understanding that we will do things by the book as much as possible. By doing things to the standard all the time, it gives the crew a very level expectation of how the command works.&rdquo;

He calls her 80-man crew among the most motivated he has seen.

&ldquo;Her leadership style is very effective,&rdquo; said Petty Officer 1st Class Michael Schweikert, an engineer on the ship. &ldquo;She is very firm, but not loud where everybody is scared or kind of in a funk.&rdquo;

Schang&rsquo;s next assignment will most likely bring her stateside, she said, where she hopes to get a fellowship on Capitol Hill. She is scheduled to command the Patriot until July 2012.

&ldquo;I said I would stay in [the Navy] for as long as it was fun and I was useful,&rdquo; Schang said. &ldquo;I&rsquo;m having a blast right now, and the Navy has told me that they feel like I should be here. So as long as those two things are still met, I&rsquo;ll stay in.&rdquo;