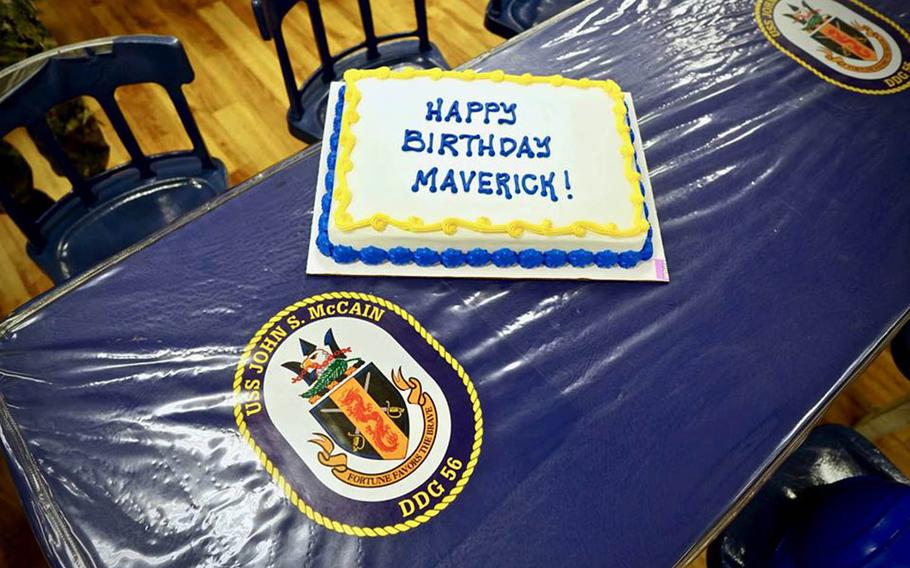 The crew of the guided-missile destroyer USS John S. McCain celebrated what would have been the 82nd birthday of Sen. John McCain, Wednesday, Aug. 29, 2018, at Yokosuka Naval Base, Japan. (Courtesy of the U.S. Navy)

YOKOSUKA NAVAL BASE, Japan — The crew of the USS John S. McCain shared a birthday cake Wednesday to commemorate what would have been late Sen. John McCain’s 82nd birthday.

A photo posted to the guided-missile destroyer’s official Facebook page shows a white cake with “Happy Birthday Maverick!” written in blue icing. A message accompanying the image said the crew’s mess has been christened the “Maverick Café” in his honor.

McCain died Saturday after a battle with brain cancer. Last month, the former naval officer was added as a namesake for the ship, which also honors his Navy admiral father and grandfather.

The USS McCain has been undergoing repairs at Yokosuka following a collision last year that killed 10 sailors near Singapore.news@stripes.com