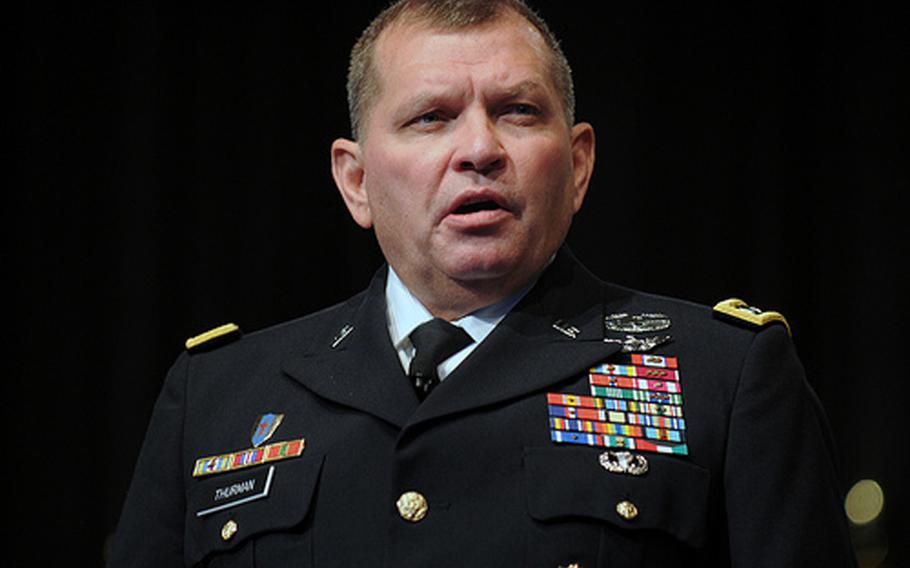 SEOUL - In a sharply worded memo, the commander of U.S. Forces Korea called out his officers and enlisted leaders for a lack of self-discipline after more than 50 officers and noncommissioned officers were caught violating an off-post curfew in the first quarter of fiscal year 2012.

"These violations from Leaders, who are responsible for the enforcement of the curfew they are violating, are unacceptable," Gen. James D. Thurman wrote in a Feb. 10 memo titled "Leader Discipline" that was obtained by Stars and Stripes.

In the memo, Thurman points out that 168 troops - a third of whom were NCOs or commissioned officers - were apprehended for violating the curfew from Oct. 7 to Dec. 31, 2011. The curfew was enacted following a number of off-base incidents, including two soldiers being accused of raping South Korean teenagers. One of the soldiers was convicted, while the other is awaiting trial.

"I cannot and will not tolerate the actions of Officers and NCOs who lack self-discipline and choose to intentionally disregard an existing lawful military order that it is their duty to uphold. ...This displays not only a lack of judgment, but a disregard for the values of our profession and sets an extremely poor example to the very Service-members who we are charged to lead. More to the point, it represents a highly disappointing lack of self-discipline and military leadership," Thurman said in the memo.

He called on the Army leadership to reinforce the curfew, focusing specifically on the officers and NCOs.

"One leader violating a lawful order is one too many let alone more than 50," he wrote. "There is no place in our Services, USFK or our Alliance for leaders who cannot follow lawful military orders."

The memo was "an internal letter that went out to the component commands," according to USFK spokeswoman Jennifer Buschick, though no further information was given about how widely it was distributed among USFK troops.

In a statement issued to Stars and Stripes, she said "the chain of command within the components ... enforces discipline and investigates and adjudicates each incident as appropriate."

USFK does not keep track of how many people have been disciplined as a result of curfew violations, only how many violations have been reported, Buschick said.

The curfew might have created a new problem for USFK - the number of on-post drinking-related incidents rose dramatically after the curfew was put in place.

Buschick said it was too early for the military to know whether the rise in alcohol-related incidents was related to the curfew.

"Any attempt to explain would be premature, especially when overall on-post incidents have remained about the same over the past year," Buschick said in a statement. "To accurately correlate a trend, more data collection over time would be needed. Therefore, we will not speculate on any cause or effect."

Thurman enacted a curfew on Oct. 7, largely in response to the brutal rape in Dongducheon of a South Korean teenager by Pvt. Kevin Lee Flippin, of the 2nd Infantry Division, several weeks earlier.

The Flippin case generated anti-American protests and calls to reform the Status of Forces Agreement, which many South Koreans believe allows U.S. troops to skirt local laws and get little or no punishment for crimes. After the rape, Thurman set a temporary curfew for midnight to 5 a.m. on weekdays and 3 a.m. to 5 a.m. on weekends. In January, he extended the curfew indefinitely and adjusted the hours to 1 to 5 a.m., seven days a week.

Thurman's decision to place the military under a curfew was widely applauded in South Korea, where it was seen as a sign of the military's willingness to tackle a perceived increase in USFK crime.