Use scalpel, not cleaver on medical billets, USUHS chief urges 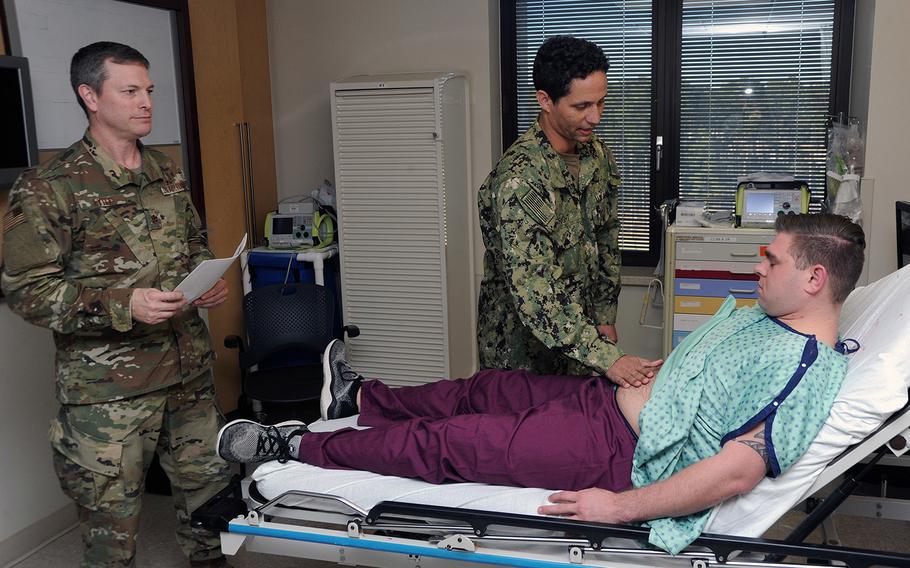 Like many military physician colleagues, Dr. Richard W. Thomas, a retired Army major general, ear-nose-throat surgeon and current president of the Uniformed Services University of the Health Sciences, is worried about tentative Defense Department plans to eliminate more than 17,000 uniformed medical billets across the military health system starting in October 2020.

Thomas is sufficiently uneasy to discuss the proposed cuts publicly, in part because medical students at USUHS, aware that uniformed health care staffs could shrink as much as 13 percent over several years, are asking Thomas and university faculty how the cuts will impact their careers and desired medical specialties.

“We get those questions and it’s a fair question. ‘I’m interested in being a pediatrician. Am I going to have a job?’ ” Thomas said. Likewise, experienced physicians in specialties that don’t deploy with combat troops are anxious too.

In a lengthy interview in his office on the Bethesda, Md., university campus, Thomas shared his concerns but also his confidence that Army, Navy and Air Force medical leaders are carefully analyzing those initial “meat cleaver” targets and almost certainly will be pressing for more scalpel-like staff reductions.

“Top-down driven, bottom-up refined,” Thomas said of the billet-reduction process he expects as the services reconsider the numbers and types of physicians, nurses, dentists, medics, technicians and support staff they need, following years of combat operations in Afghanistan and Iraq.

“The medical [community’s] responsibility is to give them the best analysis they can, to say this is what ‘right’ looks like from our perspective,” he said. If that occurs, if informed advice is heeded as Thomas anticipates, then the medical force review will become a great opportunity to reset requirements.

“After the end of every major combat window, you tend to downsize the force somewhat. There’s a certain amount of health in that,” Thomas said.

We reported here six weeks ago on a yearlong collaboration on medical staff cuts between the Joint Chiefs, service medical departments, the Defense Health Agency (DHA) and analysts in the Office of Secretary of Defense. Cuts of roughly 7,300 from Army medical staff and 5,300 apiece from Navy and Air Force surfaced in draft reports. The intent is to repurpose billets as warfighters and to deepen individual workloads across military medicine so clinical skills stay sharp.

Those goals make sense, Thomas said. It’s the size of cuts that concerns him, particularly given the likely impact on graduate medical education pipelines, which he calls the “lifeblood” of military medicine. Graduate education produces specialists, from heart surgeons to primary care physicians to pediatricians. The right mix ensures deployment readiness and proper staffing of base hospitals.

Thomas also noted that just as Congress directed DHA to assume central control of all military health facilities, it also has asked for a study of whether USUHS should oversee all graduate medical education now residing with the services. Thomas believes that shift will happen, calling it logical given how other medical functions are being consolidated under a single combat support agency.

Thomas cautioned against staff cuts so deep they force closure of certain graduate medical education pipelines that one day would need to be restored.

“The military is really good about a couple of things. If you give them a target, they will work towards that number. That’s the issue. If you look at those overall numbers — I looked at them the other day, for example, 7,000 for the Army. Over 1,000 of those billets are medical corps. Doctors.”

Analyzing the effect of such cuts on the ability to meet mission “is really what the services’ medical departments are for. They need to take that and do the analysis,” Thomas said. “They may come back and say, ‘Hey that number’s too large. I can’t do it.’ But I also think they are going to have to snap link this to a timeline. ‘If you want me to attrite certain specialties or personnel numbers, how many of those then become civilians?’

“I’ll give you an example: a pediatric endocrinologist,” Thomas said. “ ‘Maybe I don’t need one in uniform but I’ll convert that to a civilian billet if I still have that requirement.’ That’s the analysis that has to be done.”

USUHS becomes an occasional target for budget hawks, Thomas said, even as its importance grows as the “foundation of education and training for the military health system.” That periodic political threat is one reason Thomas wants to tout the “value proposition” USUHS brings to military medicine. “We don’t want to be the best university no one ever heard of,” he said.

USUHS is a fully accredited medical school. While universities typically begin as colleges, evolve, and then establish medical schools, Congress reversed that order to create a “West Point for doctors” after conscription ended in 1973. The intent was to ensure a strong cadre of military-trained physicians. Over the years USUHS added a graduate school of nursing, a dental school and a college of allied health sciences. Today it has about 1,000 faculty on staff.

The medical school gets 20 applicants for each first-year student billet, a ratio that matches and exceeds most Ivy League medical schools, Thomas said. This year it will graduate 171 new physicians, each obligated to serve seven years active duty in Army, Air Force or Navy. Its graduates are only 15 to 18 percent of new physicians the military needs. Civilian medical schools produce the majority of military doctors, enticed to serve by military-paid scholarships or loan forgiveness.

“I tell people our graduates stay longer, not because of a longer service obligation [but] because they are more obligated to serve,” said Thomas.

Most students enter USUHS because the military pays for their medical degrees. They serve beyond initial obligations for the training opportunities or the desire to deploy, said Thomas, who once commanded the Army’s Medical Corps.

“These guys [and gals] would tell me, ‘If you deploy me, I’ll stay.’ Because to many of them, that was the ‘it.’ That was the real deal for them. They understood why we existed and it all made sense.”

A higher percentage of USUHS graduates train in specialties deemed combat necessary such as general surgeons, anesthesiologists and emergency medicine, but many also become primary care physicians or family care specialists. By the time year groups of doctors reach O-6 rank — colonels in the Army and Air Force, captains in the Navy — more than a third are USUHS graduates, Thomas said.

Because Congress and the Defense Department prize USUHS graduates, the medical school is set to expand over the next several years to produce at least 30 more doctors annually. A new building of almost 500,000 square feet will be constructed, starting in 2021 to add classrooms, research labs and offices.

Thomas became university president in 2016, bringing deep experience in combat medicine and senior health management. After earning a doctorate in dental surgery, he went to medical school to become a surgeon specializing in otolaryngology/head and neck surgery. He served five combat tours including as division surgeon for the 101st Airborne in Afghanistan and Iraq, and surgeon general of U.S. forces in Afghanistan. His last military job was first director of health care operations and chief medical officer at the Defense Health Agency.

Thomas noted that the military has been the source of some of “the greatest advances in medicine, whether it’s trauma care, infectious disease care, traumatic brain injury care, psychological health. … Combat is the greatest catalyst.”

That’s always been true and was so again through 18 years of continuous combat operations since 9/11, he said.