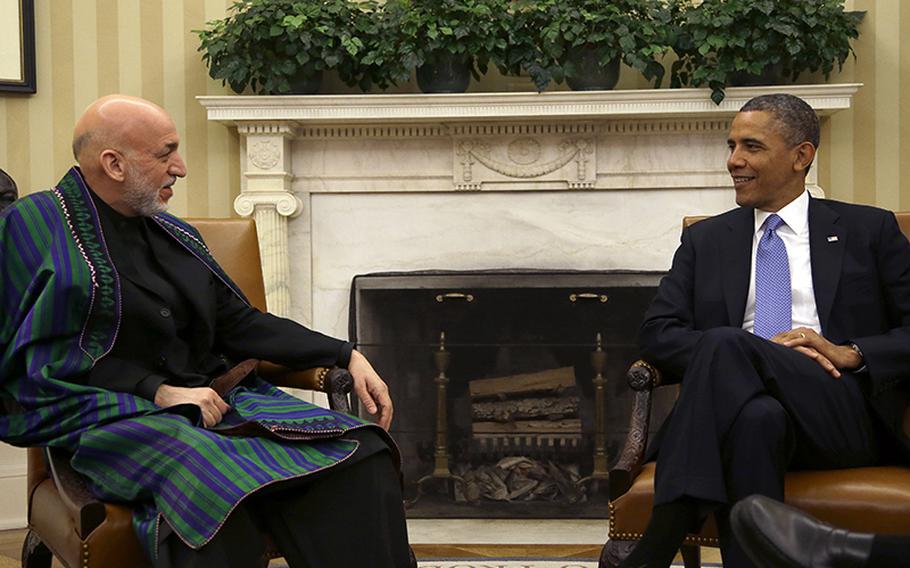 WASHINGTON &ndash; U.S. and NATO forces will hand off leadership for security throughout Afghanistan to indigenous troops a few months sooner than expected, an acceleration that assuages Afghan concerns about sovereignty and backs up U.S. claims that the war is on track.

&ldquo;What we&rsquo;re seeing is Afghan soldiers are stepping up, at great risk to themselves, and that allows us to make that transition during the spring,&rdquo; President Barack Obama said Friday in a joint press conference with President Hamid Karzai.

The so-called &ldquo;roadmap&rdquo; for the security transition previously called for Afghan troops to take the lead throughout the country in mid-2013, as U.S. forces took on an advisory and support mission. Now that will happen early in the year.

But Obama said he has yet to decide whether the adjusted timetable means that troop withdrawals will accelerate, saying he would announce the next phases of the drawdown in coming months.

The press conference followed a morning of meetings between Obama and Karzai, capping off a several-day visit by the Afghan president that also included meetings at the Pentagon and State Department.

Karzai got a key concession that he came to Washington seeking, with an agreement that Afghan prisoners and detainees would be placed &ldquo;under the sovereignty and control of Afghanistan,&rdquo; according to a joint statement released Friday. Karzai said at the press conference he expected the handover to begin within days.

As with the pace of troop drawdowns, Obama did not specify how many troops, if any, the United States hopes to leave in Afghanistan after the official end of NATO combat in December 2014. Any post-2014 mission would be &ldquo;very limited,&rdquo; he said, focused solely on counterterror activities against al-Qaida and training Afghan troops.

Any mission is contingent on U.S. troops have immunity from Afghan prosecution, he said. The United States pulled completely out of Iraq in 2011 when a status-of-forces agreement to provide immunity could not be reached.

Karzai responded that the speeded-up security transition &ndash; which he said includes withdrawing U.S. troops from village operations &ndash; as well as the agreement on prisoners makes immunity more politically palatable to Afghans.

The two presidents also said that the Taliban would be allowed to open a political office in Doha, Qatar, where negotiations between the insurgent group and the Afghan government could take place. The Taliban pulled out of impending peace talks last year, saying they would not negotiate with a Karzai government they called illegitimate. Karzai has been seen as reluctant to engage in talks for fear his government could be pushed to the side if the Taliban and the United States talked directly.

Obama said the transition is &ldquo;on track,&rdquo; and that the United States would achieve its goals in Afghanistan.

&ldquo;As Afghans stand up, they will not stand alone &ndash; the United States and the world stand with them,&rdquo; he said. &ldquo;Next year, this long war will come to a responsible ending.&rdquo;