US Strykers rumble over Romanian river in show of force 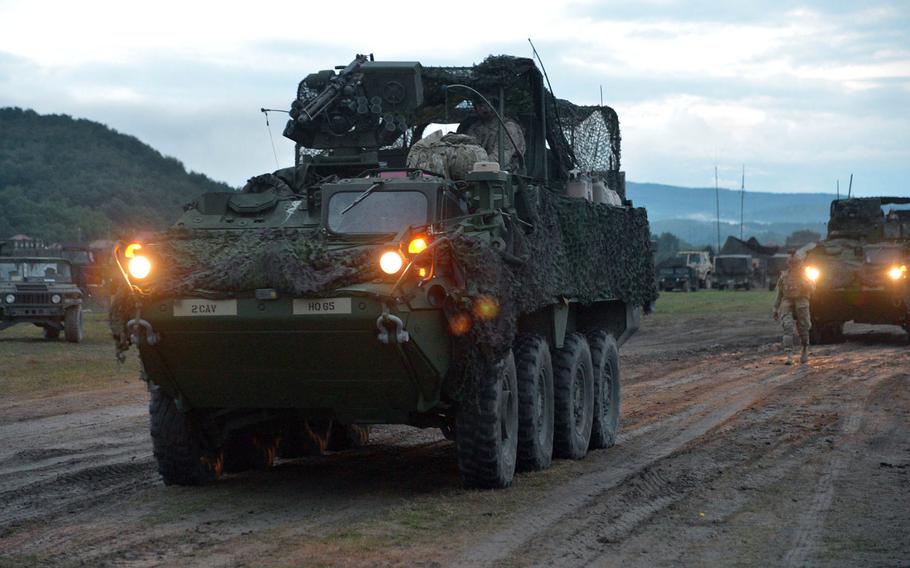 A Stryker of 2nd Cavalry Regiment heads out to a night crossing of the Olt River near Ramnicu Valcea, Romania, Sunday July 16, 2017. (Michael Abrams/Stars and Stripes)

A Stryker of 2nd Cavalry Regiment heads out to a night crossing of the Olt River near Ramnicu Valcea, Romania, Sunday July 16, 2017. (Michael Abrams/Stars and Stripes) 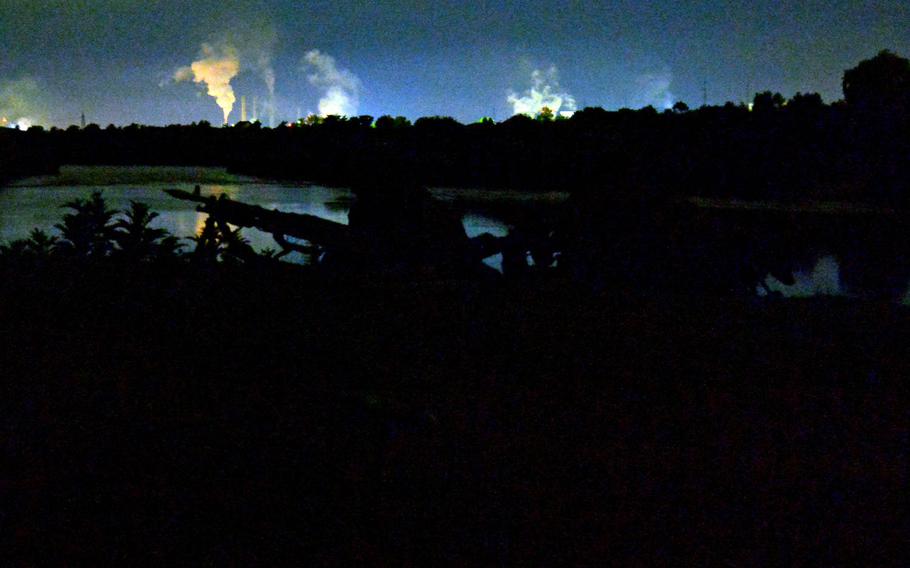 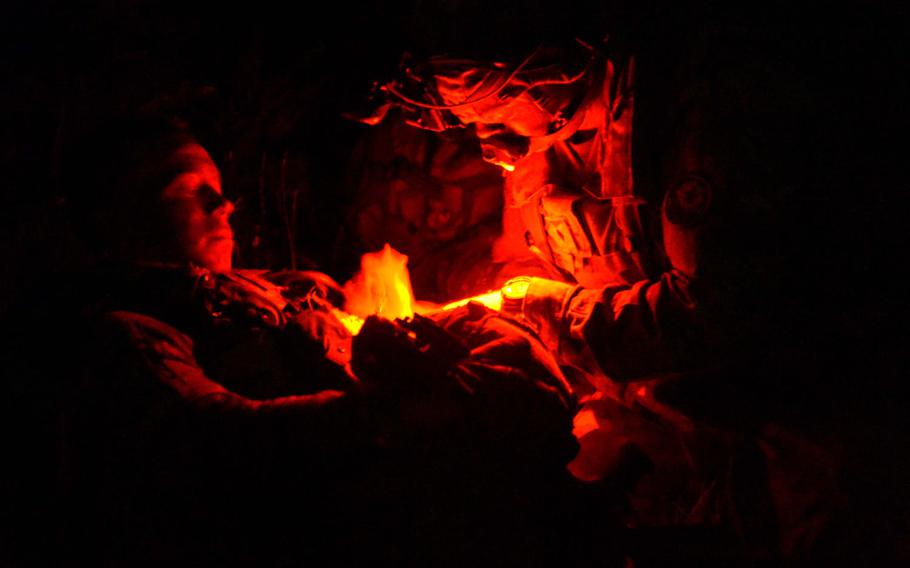 A medic checks on a ''wounded'' soldier during a night river crossing operation of the Olt River near Ramnicu Valcea, Romania, late Sunday, July 16, 2017. Soldiers of the 2nd Cavalry Regiment with their Strikers and support vehicles crossed the Olt on two bridges set up by Romanian and German troops. (Michael Abrams/Stars and Stripes) 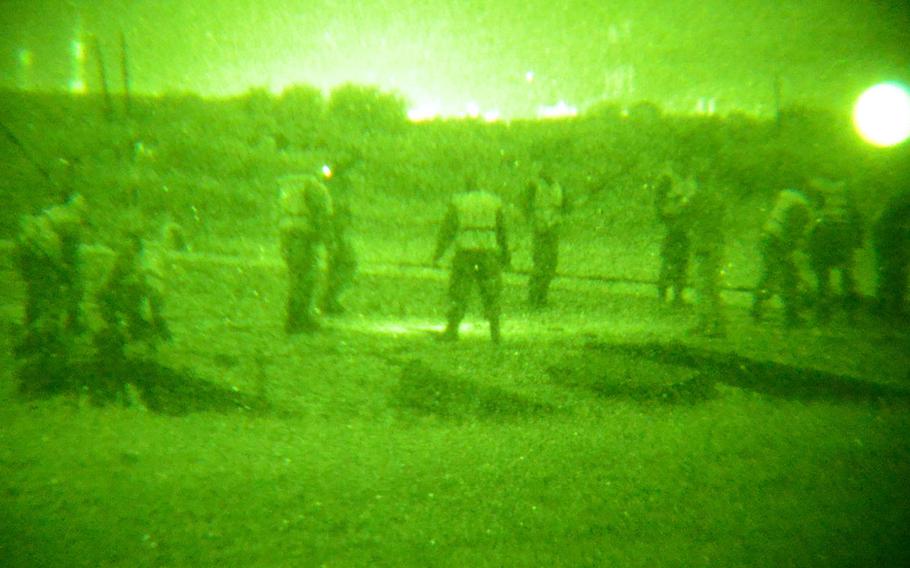 Romanian soldiers anchor a bridge ramp during a night river crossing in the early hours of Monday, July 17, 2017. Romanian and German soldiers constructed two bridges over the Olt River near Ramnicu Valcea, Romania, for the U.S. Army's 2nd Cavalry Regiment to cross on the way to the Black Sea. (Michael Abrams/Stars and Stripes) 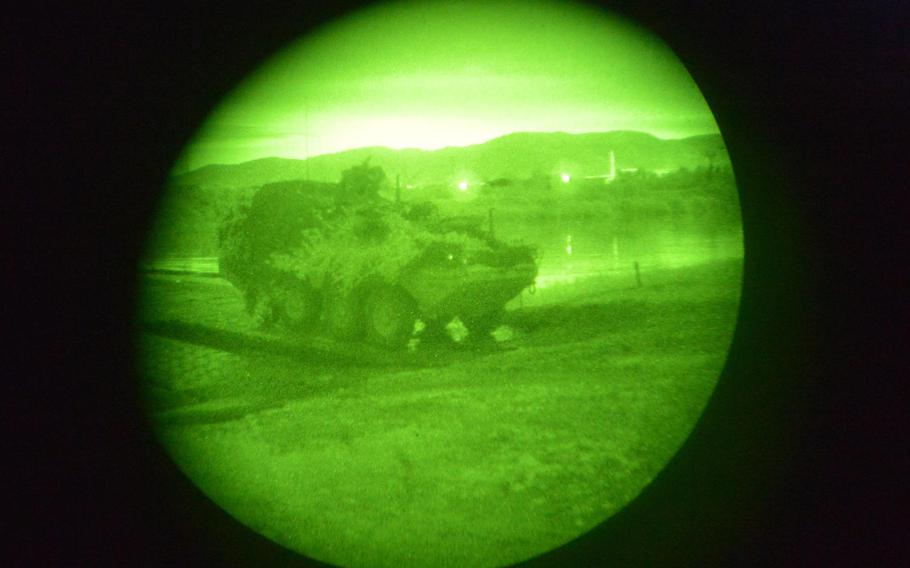 A Stryker of the 2nd Cavalry Regiment crosses a Romanian bridge across the Olt River near Ramnicu Valcea, Romania, early Monday, July 17, 2017 during a night river crossing operation. (Michael Abrams/Stars and Stripes) 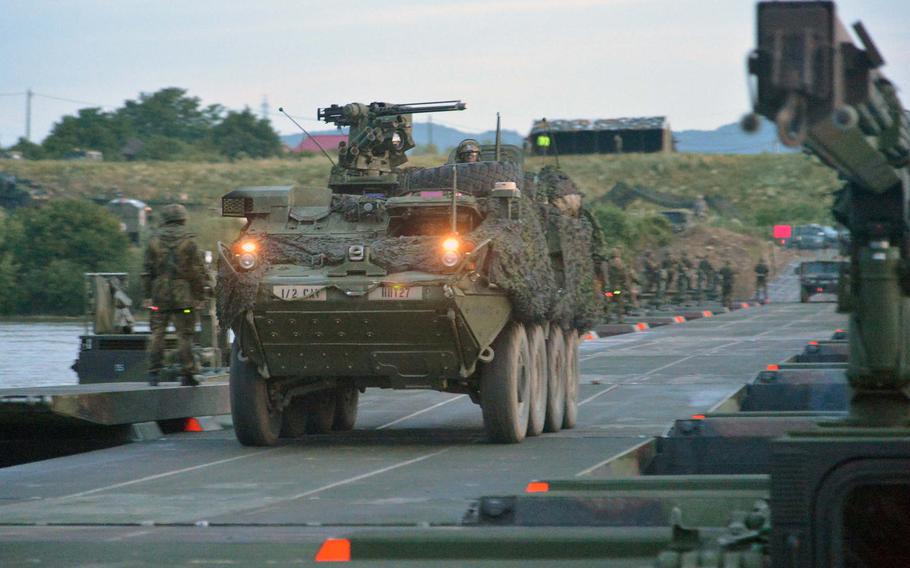 A Stryker of the 2nd Cavalry Regiment crosses a German bridge over the Olt River near Ramnicu Valcea, Romania, early Monday, July 17, 2017 during a night river crossing operation. (Michael Abrams/Stars and Stripes) 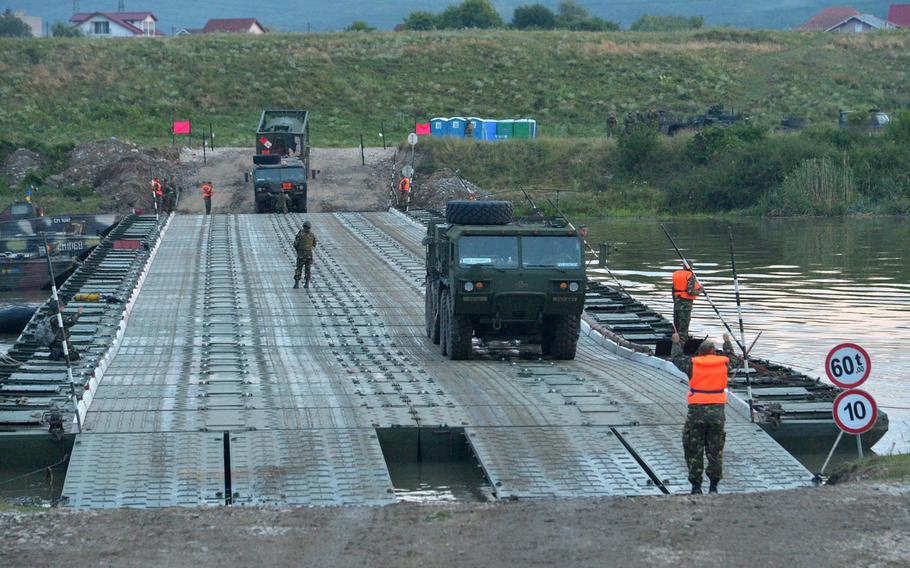 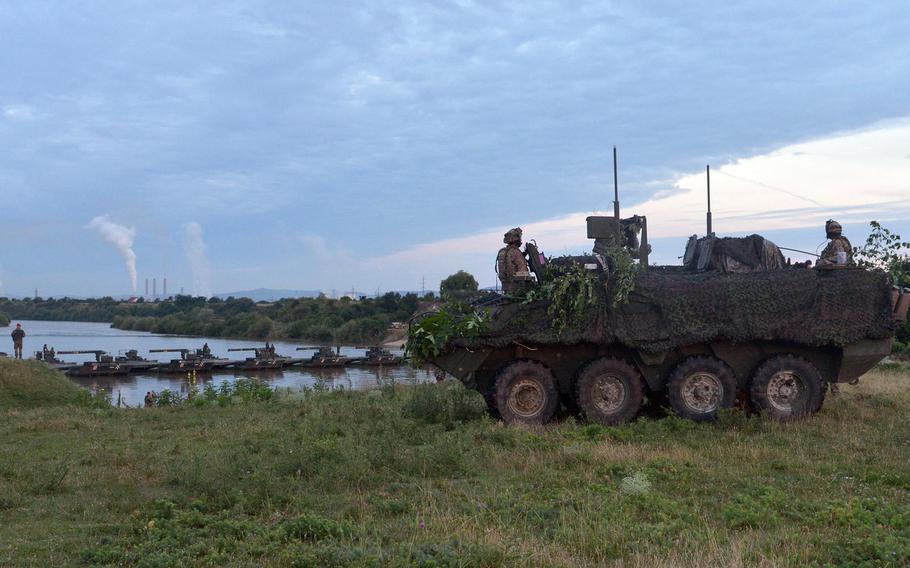 Sitting in their Stryke, soldiers of the 2nd Cavalry Regiment watch their unit cross the Olt River near Ramnicu Valcea, Romania, early Monday, July 17, 2017 during a river crossing operation. In the background is the bridge a German unit constructed on the river during the night. (Michael Abrams/Stars and Stripes)

RAMNICU VALCEA, Romania — U.S. scouts sneaked across the river in darkness, looking to eliminate an enemy seeking to stymie the advance of allied forces waiting on the other side.

The team of 2nd Cavalry Regiment soldiers fought along the banks of Romania’s Olt River late Sunday, fending off “snipers,” taking “casualties” and “detainees.” The mock battle, part of the U.S. Army Europe-led Saber Guardian exercise, was a rare opportunity for allies to attempt a nighttime river crossing involving more than 2,000 troops and hundreds of vehicles.

“Sniper,” yelled one soldier after a comrade was hit. “Stay with me buddy,” said another solider as he administered first aid to the “wounded” soldier.

The night crossing, complete with an opposing force to challenge the maneuvers, is one way USAREUR is trying to add more complexity to its exercise program this year. The maneuvers form an integral element of NATO’s wider policy of reassuring member states in Eastern Europe concerned about a more aggressive Russia.

“To be an effective deterrent you have to show you are able to get there,” USAREUR’s Lt. Gen. Ben Hodges said.

The action lasted for several hours, with the crackle of machine guns, mortars and flares as the “enemy” force was finally contained, making it safe for troops on the other side of the river to mobilize.

Then German and Romanian engineers got to work, setting up pontoon bridges that unfolded from one side of the river bank to the other. Eventually 2nd Cav’s Strykers crossed the floating structure, pushing onward to the other side.

Lackey’s soldiers have been on the road since June 29, moving across Europe on a grueling convoy through several countries. After operations in Romania, the unit will push into Bulgaria and eventually the Republic of Georgia.

“What we’re doing here, if we’re successful at it, means we don’t go to war with somebody,” Lackey said. “We’re here with our allies to deter any aggressor and show it’s not worth the cost.”

Besides 2nd Cavalry Regiment soldiers, about 500 Romanian troops and 440 Polish, German, Dutch, Macedonian, Slovenian, Lithuanian and British soldiers were part of the effort.

Last summer, the Army worked on its bridging capabilities during exercises, but the focus was more on the technique itself, Hodges said. This year, the idea was to apply those skills while troops are under more duress, adding a more intensive tactical dimension to the drills.

“So doing a night crossing represents that (shift),” Hodges said. “We should have done it last year.”

More than 25,000 troops are taking part in the annual Saber Guardian exercise, in which numerous units operate across Romania, Bulgaria and Hungary. The main objective is to test allies’ ability to work together and move quickly in the region in the face of a possible future crisis.

The exercises are also meant to send a deterrent signal to Russia.

Moscow, meanwhile, has complained about NATO’s bigger presence along its eastern flank, which Russia regards as a provocation.

But in the field, troops were focused on the task at hand.

Staff Sgt. Jonathan Quinn, a bridging engineer with the Missouri National Guard, mobilized to Europe to bring his unit’s expertise in traversing waterways, said it normally takes about 90 minutes to lay down a bridge.

“It’s not an easy thing to do, but we do it quick,” said Quinn, his face painted forest green.

USAREUR has sought to bring a more authentic feel the training this year, with vehicles covered in foliage to blend into the landscape. All U.S. troops involved in Saber Guardian, from the grunt in the field to generals observing from a distance, wear flak jackets and have their faces painted to add a further dose of reality.

And as the 2nd Cavalry travels across Romania and other parts of Europe, stops along the way where soldiers meet the locals are no longer called “static displays.” In the spirit of a mission focused on deterrence, the events have now been given a tongue-twisting rebranding: “combined combat capability display.”

Mixed in among the infantrymen was Senior Airman Usama Bamieh, a staff weather officer, who rode inside one of 2nd Cavalry’s Stryker’s across the Olt River. His job is to advise commanders on the weather conditions that could disrupt operations. The region’s mountains and hills make unpredictable microclimates that can be a challenge for Army aviators and cavalrymen alike, he said.

“That’s what I’m here for. I’m also able to work with our allies and our own soldiers, helping them with basic observational techniques,” Bamieh said.

For Lackey, his unit’s trek across Europe to work with allies brings to mind old stories he heard from his father about the Cold War-era “Reforger” exercises, which mobilized thousands NATO troops around Europe in a show of readiness.

Now, after spending much of his career fighting the wars in Iraq and Afghanistan, crossing a Romanian river in a new mission to deter Russia still is something of a surprise.

“It is true, it's a little mind boggling,” Lackey said.