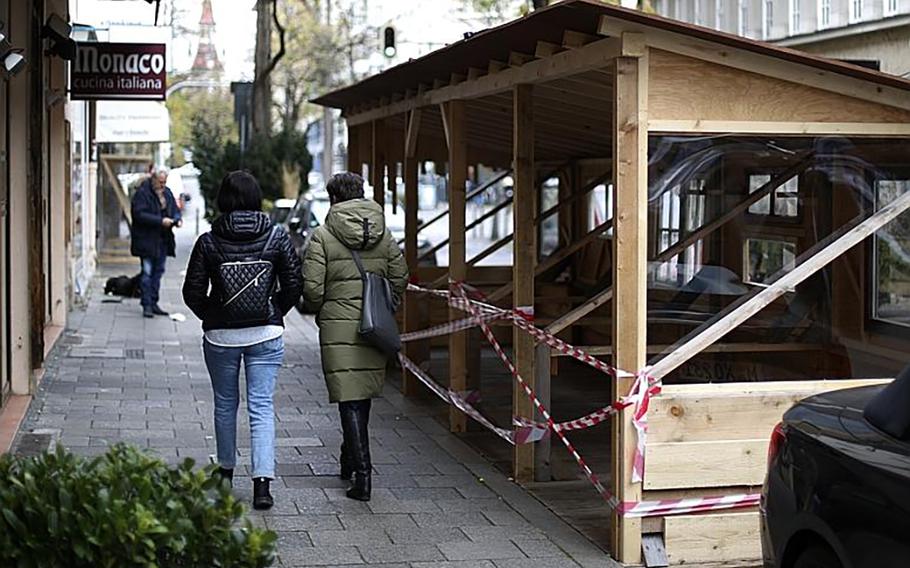 People pass a closed restaurant during the temporary closing of restaurants and bars as the spread of coronavirus continues in Munich, Germany, on Wednesday. (Matthias Schrader/AP)

KAISERSLAUTERN, Germany — Germany has cut the time travelers from countries with high rates of coronavirus have to spend in quarantine, including those from the U.S., which on Wednesday exceeded 10 million cases, a fifth of infections worldwide.

But while the American military community in Germany won’t be seeing shorter times in quarantine, some service members and their families will be able to test out in less than a week, officials said.

Stuttgart-based U.S. Army Europe said it was “continuing with our previous guidance of a 14-day quarantine after a visit or permanent change of station from a high-risk area, regardless of testing negative for COVID,” even as several German government ministries’ websites said that quarantine had been shortened from 14 days to 10 as of Monday.

“This can be further shortened if a coronavirus test administered five days after arrival, at the earliest, is negative,” said Doris Berve-Schucht, a spokeswoman for the health ministry.

Officials at U.S. Army Garrison Wiesbaden confirmed in a virtual town hall meeting Tuesday that the quarantine period would remain at 14 days, in spite of the German changes.

Personnel making PCS moves to Ramstein Air Base from a high-risk area are also required to quarantine for 14 days, but those over the age of 18 can test out after five days, said a memorandum released last month, which 86th Air Lift Wing spokesman Killian Bluemlein said was still in force.

Those returning to Air Force units in the Kaiserslautern area from temporary duty travel can also test out of quarantine after five days, meaning “on day six or later,” the memorandum says. Personnel and their families returning from unofficial travel or leave will only have the option of being tested after 10 days in quarantine, it said.

Germany is one of several countries in Europe, including Estonia, Italy and the Netherlands, that have reduced quarantine durations from two weeks to 10 days.

The U.S. Centers for Disease Control and Prevention “has not changed its recommendation or guidance on a 14-day quarantine for those exposed to confirmed cases of COVID-19 or who have recently traveled to places with widespread transmission of the virus that causes COVID-19,” CDC spokeswoman Belsie Gonzalez told Stars and Stripes by email.

The quarantine changes in Germany – and the military sticking to the existing guidelines – came as a partial lockdown, which has seen restaurants and bars close except for takeout, and bans on large gatherings and hotel stays for leisure purposes, appeared to be slowing the spread of the virus, which began to resurge in the country and the rest of Europe in September.

Eighteen new cases per 100,000 inhabitants were recorded in Germany over the week ending Tuesday, compared with 37 per 100,000 last week, when the lockdown began, and 99 per 100,000 in the final week of October, Die Zeit newspaper wrote, saying Germany was “flattening the curve.” Germany’s public health agency, the Robert Koch Institute, declined to comment on the analysis, which was based on RKI data.

In contrast, the U.S recorded more than 100,000 new cases of the virus every day for the past week and on Wednesday exceeded 10 million total cases.

Most Americans are still barred from entering Germany, although exceptions are made for residents, including service members, births, weddings, funerals or family emergencies.

The authorities are expected to lift entry restrictions on at least one group of Americans in time for the Christmas holidays.