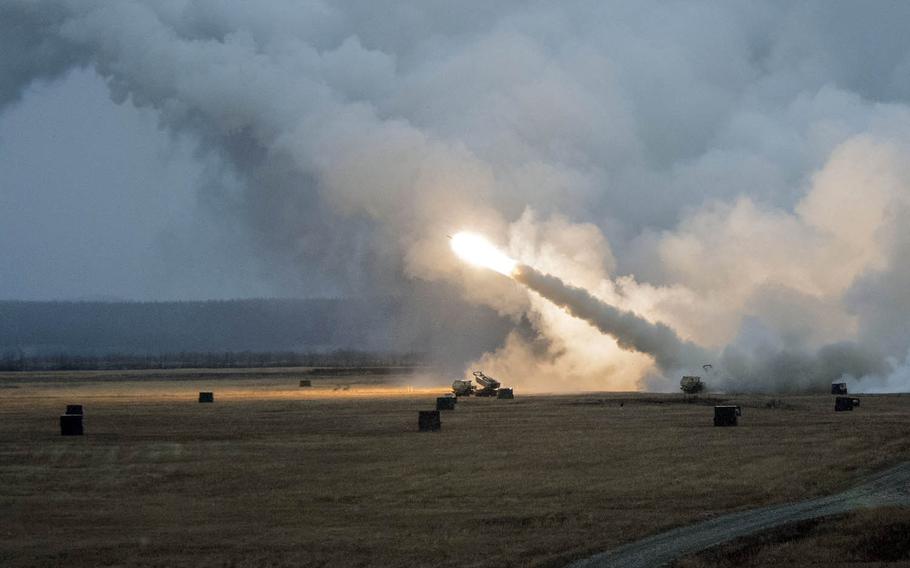 CAMP FOSTER, Okinawa — The U.S. military has informed the Japan Self-Defense Forces of plans to conduct a missile test around Okinawa later this year as a deterrent against an increasingly assertive China, according to Japan’s Sankei newspaper.

It is unclear when the test will take place but it will reportedly feature two systems: the Army’s High-Mobility Artillery Rocket System — known as HIMARS — and the Army Tactical Missile System — or ATACMS — the paper reported Jan. 3 without citing sources.

HIMARS is a long-range, mobile, land-based launch system capable of targeting ships at sea. ATACMS, which is made by Lockheed Martin, has a range of approximately 186 miles.

This would be the first missile test in or around the southern Japanese island prefecture of Okinawa, Ministry of Defense officials told Stars and Stripes, without confirming the drill would take place. The HIMARS system was first deployed in Japan by the 3rd Marine Division in August 2017 during Northern Viper exercises on the northern island of Hokkaido.

Ministry officials declined to comment on the report. U.S. Forces Japan officials referred Stars and Stripes’ inquiry to the U.S. Army, which did not respond.

The HIMARS launcher will reportedly be shipped to Okinawa by cargo aircraft and operated by soldiers from the U.S. Army’s 1st Infantry Division, which is headquartered at Fort Riley, Kan., the Sankei report said.

The drills are seen as a deterrent against Chinese aircraft carriers and warships, specifically, Sankei said.

China, a communist nation of 1.3 billion, has become increasingly assertive in the Indo-Pacific region in recent years, fueled by strong economic growth and military technology, which has helped it modernize its forces and branch out into new territories in hopes of supplanting the United States as the region’s dominant force.

The Chinese have built and militarized man-made islands across the South China Sea. Freedom-of-navigation patrols by the U.S. Navy have led to saber-rattling by Chinese military officials.

Disputes in the East China Sea have further complicated matters, with China claiming the resource-rich Senkaku islands, which are also claimed by Japan and Taiwan. Successive U.S. presidents have said the islands will be protected under the U.S-Japan security alliance but this hasn’t stopped China from buzzing Japan’s contiguous zone — just outside its territorial waters — with ships, submarines and aircraft.

Japan Air Self-Defense Force pilots were forced to sortie 500 times in response to Chinese aircraft incursions in fiscal year 2017, which started in April 2017 and ran through March 2018, the ministry said. The number was up in the first half of FY 2018 to 345 times.

Five submarines have been spotted entering Japan’s contiguous zone since 2013, Defense Ministry officials told Stars and Stripes in 2018. A Chinese aircraft carrier passed between Okinawa’s main island and Miyako Island in 2016, along with 18 Chinese aircraft in 2017 and seven by May 2018.

Chinese ships intruded into Japan’s territorial waters near the Senkakus 36 times in 2016, 29 times in 2017 and eight times in the first three month of 2018, the ministry said in its annual 2018 white paper.

The incidents often lead to protests from Japanese diplomats that have not stopped the intrusions.

Due to the threat, Japan has increased its defense budget to record levels.

In December, Prime Minister Shinzo Abe’s Cabinet approved a record $240 billion for military equipment over the next five years, which is about $17.8 billion more than earlier budgeting, ministry documents found on its website said.

Japan’s Self-Defense Forces has also increased training with the U.S. and other regional allies in exercises like Talisman Saber in Australia and Rim of the Pacific in Hawaii.