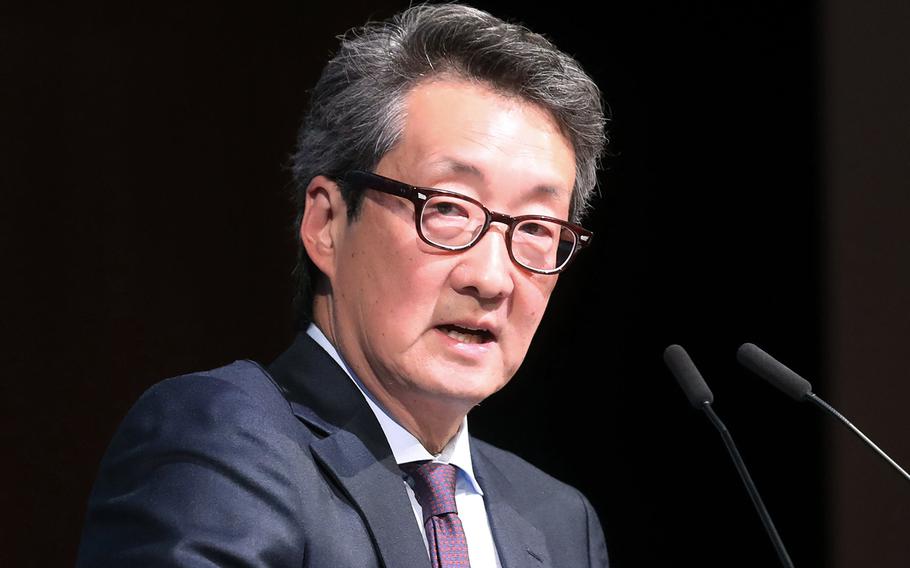 In this Jan. 18, 2017, photo, Washington-based academic Victor Cha speaks during a seminar in Seoul, South Korea. (Yonhap via AP)

SEOUL, South Korea — The U.S. administration’s decision to drop a prominent Washington-based academic as its choice to be the new ambassador to South Korea raised new concern about a possible so-called “bloody nose” strike against the nuclear-armed North.

Victor Cha was pulled from consideration for the position after he privately disagreed with President Donald Trump’s policy on North Korea and threats to scrap the U.S.-South Korea free-trade agreement, the Washington Post reported Tuesday.

U.S. officials have confirmed the decision but not the reason. The move was seen as unusual because Washington already had informed South Korea that it intended to nominate Cha.

South Korea’s Foreign Ministry said Thursday that Washington informed it that the post won’t be filled before the Olympics begin next week on the divided peninsula.

“The U.S. has sought our understanding through diplomatic channels that its efforts to send its ambassador to the South before the Pyeongchang Winter Olympics have not panned out as planned,” spokesman Noh Kyu-duk said during a regular press briefing.

“It has also asked for our understanding about the fact that the matter was reported in media before it was properly discussed with the South,” Noh added.

With uncertainty high over conflicting signals, critics and other observers seized on the news as evidence that Trump may be leaning toward a unilateral first strike.

The president has in recent months bounced between saying he’d be willing to talk to North Korean leader Kim Jong Un and warning that he’ll unleash “fire and fury” and “totally destroy” the North if forced to defend the United States and its allies.

“An ominous signal,” the Korea Joongang Daily said in an editorial. “The last-minute withdrawal reflects the Trump administration’s interest in a military strike and abrogation of the trade pact.”

The president’s use of strong language about North Korea as well as the U.S. military and nuclear arsenal in his State of the Union speech stoked the speculation. He also stressed his plans to exert “maximum pressure” on the North, which refers to the diplomatic efforts.

The debate comes at a sensitive time as South Korea is trying to maintain a diplomatic thaw with the North after the communist state agreed to participate in the Feb. 9-25 Winter Games.

The head of a South Korean opposition party said Cha’s withdrawal from consideration shows that Trump is taking a harder line on North Korea than anticipated.

“If President Trump disapproved of even Victor Cha, who has been known as a hawk, we have to think seriously about its meaning,” Rep. Yoo Seong-min was quoted as saying by the Yonhap News Agency. “The only way to prevent a U.S.-started war is persuasion through the Korea-U.S. alliance and sanctions and pressure against the North.”

The move also appeared to expose a rift in the administration over the potential use of military action versus a continued reliance on an economic and diplomatic campaign to isolate the North Korean regime.

National security adviser H.R. McMaster has advocated preparing for military action, while Secretary of State Rex Tillerson has pressed for a diplomatic solution. Defense Secretary Jim Mattis says military options are needed but should be used only if diplomacy fails.

Mattis and others have warned a war with North Korea would be “catastrophic” as tens of thousands of people would be killed even without the use of nuclear weapons.

North Korea has soldiers and conventional weapons massed on the heavily fortified border, which is about 35 miles from Seoul. The U.S. maintains some 28,500 servicemembers in the South to try to prevent an invasion.

Cha, a professor at Georgetown University who served as director for Asian affairs on the National Security Council during George W. Bush’s tenure, confirmed his view that a preventive strike would not be worth the risk of a full-fledged war.

Cha wrote in a commentary published Tuesday in the Post that the North poses a serious nuclear and missile threat.

“But the answer is not, as some Trump administration officials have suggested, a preventive military strike,” he said. “Instead, there is a forceful military option available that can address the threat without escalating into a war that would likely kill tens, if not hundreds, of thousands of Americans.”

“When I was under consideration for a position in this administration, I shared some of these views,” he added.

The ambassador’s post, which has been vacant since Trump took office a year ago, requires Senate confirmation. The U.S. Embassy in Seoul is being led by charge d’affaires Marc Knapper, a career diplomat.

“It’s a lengthy and thorough vetting process. Until a candidate is nominated, we have a highly experienced and well-respected charge d’affaires serving in Seoul,” White House spokeswoman Lindsay Walters said, according to The Associated Press.

The idea of a “bloody nose” strategy involving a limited strike designed to batter North Korea without provoking massive retaliation was raised earlier this year by the Wall Street Journal.

South Korean President Moon Jae-in’s office said Trump denied in a phone call that he had such plans, but that was not included in the White House readout of the conversation.