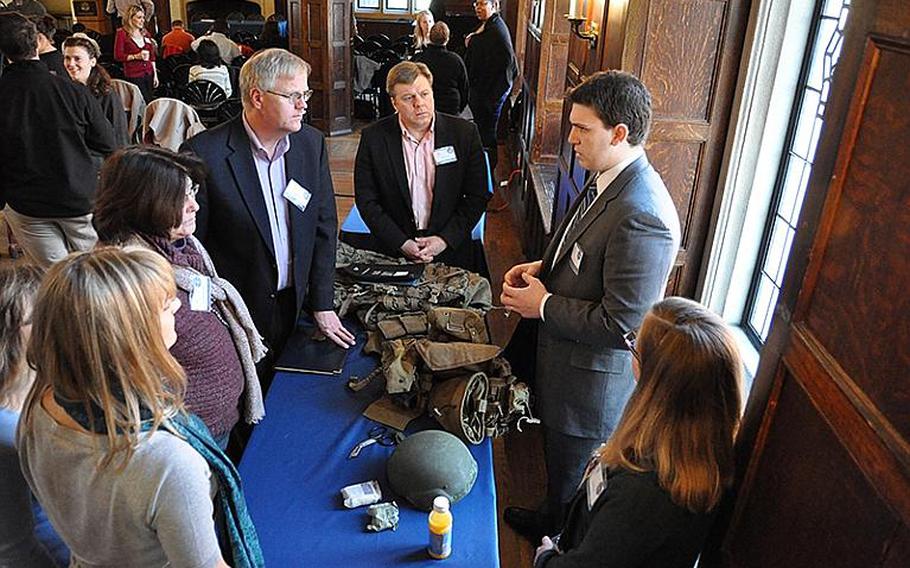 WASHINGTON — Last semester, when a student in her class casually commented that “soldiers don’t care who they shoot at,” professor Marilyn McMorrow wasn’t sure how the Iraq War veteran a few seats away would react.

“And I wasn’t sure if I should make him respond,” the Georgetown University instructor said. “I didn’t want that to go unchallenged, but I also didn’t want to put (the veteran) on the spot.

“I did talk to the class about wrong assumptions of troops in war, but I didn’t know if that was enough.”

McMorrow’s dilemma is increasingly frequent for faculty at college campuses, as tens of thousands of veterans return from Iraq and Afghanistan and enroll in classes.

Many universities have made a push to reach those students (and their generous education benefits) but still aren’t fully prepared for having those veterans alongside 19-year-olds with little exposure to the military.

The format and topics were based off similar events popping up across the country in recent months. David Shearman, coordinator of the school’s veterans office, said the number of current and former military members on campus has jumped in recent years from a few dozen to more than 500.

“The professors know stuff on how to deal with veterans day to day, help them with basic issues that come up in class,” he said.

“But they don’t always know why students joined the military, what serving overseas really means, what they mean when they talk about a FOB.”

So the Vet Ally organizers brought body armor and helmets for faculty to handle, and invited West Point professor Elizabeth Samet to talk about her classroom interactions with officers-to-be.

Student veterans and current servicemembers enrolled at the school spoke about their headaches (“Some teachers don’t recognize that I have more life experience than my classmates”), their successes (“The younger students did teach me how to dress like a civilian again”), and the way they approach college (“We have careers and families, so we don’t stick around after class.”)

Security Studies professor Elizabeth Stanley, an Army veteran who served in Kosovo, talked about her experience with post-traumatic stress and how to recognize signs in student veterans.

But she also warned not to stigmatize all veterans as potential threats, and not to single them out as classroom experts. She praised McMorrow’s response to the callous civilian remark in class, saying the comment needed to be challenged, but not necessarily by the only veteran in the room.

Army Maj. Paul De Leon, an event organizer and a literature graduate student at Georgetown, said the goal is to create an ongoing conversation about what it means to have combat veterans on campus. The group hopes to repeat the seminar next semester.

Meanwhile, school officials say they’ll continue the push to get more viewpoints – and more veterans – into their classrooms.

“We have many people on campus who have no idea what military life is,” said Joseph Ferrara, chief of staff for Georgetown. “We need to see our veterans as a national resource. Bringing them in meets a real need for higher education, and our country.”