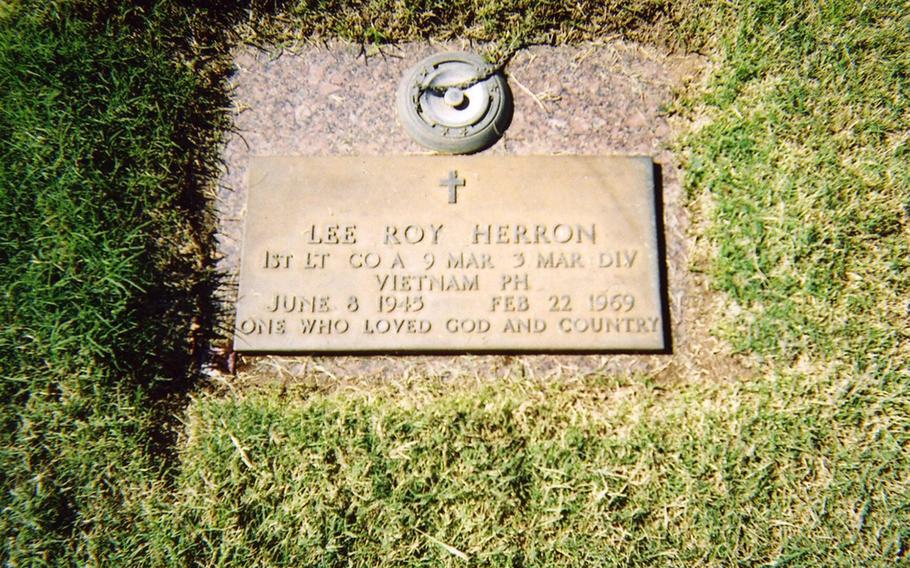 For most of his life Lee Roy Herron thought it was his destiny to fight for our country, and he wanted to be ready. When he left for Vietnam in late 1968, he was mentally and physically prepared for battle.

On Feb. 22, 1969, his Marine company was on patrol in the jungles of A Shau Valley when it came under attack from a camouflaged enemy position. When a mortar round landed in the midst of the command group and severely injured the 2nd Platoon leader and others, Lee Roy quickly took charge of the injured officer’s platoon. Terry Presgrove, a Marine injured by the mortar’s fragments, described Lee Roy’s initial response in an email to me:

“Lee came up to me shortly after the mortar had hit in our midst. I was laying on my back on top of another wounded Marine. Lee knelt down and asked me (having to scream above the roar of the firefight) where my battle dressing was, seeing that I was bleeding.

We exchanged a few words then he used the only four-letter word I ever heard him say: “Damn.” He was visibly upset by the carnage, but had that look of determination and firm resolve to do his duty. Our eyes met, communicating without speaking the knowledge that we were in a serious jam. He patted me on the head and quickly moved off toward the dug-in enemy.”

The account of Lee Roy’s calmness and sense of determination during battlefield conditions did not surprise me. For those of us who knew him, Lee Roy’s valor in Vietnam would have been expected.

I first met Lee Roy in 1957 when we began the seventh grade at Matthews Junior High School in Lubbock, Texas.

Lee Roy and I were raised on the north side of town, primarily a modest- to low-income area. We both had high aspirations and a special friendship that lasted from the fall of 1957 until his death in 1969.

Almost from the beginning we became fast friends — “buddies” as Lee Roy called us. But very quickly there developed a competition between the two of us, from scholastics, athletics and leadership awards, to special events such as spelling bees and the national fitness test.

By the end of the eighth grade our friendly competitiveness had become well-known among teachers and classmates. A couple of ninth graders who knew us made a pointed reference in their class “Last Will and Testament.” “BOBBY CLARK and KENNY ALLRED would like to leave their dueling swords to LEE ROY HERRON and DAVID NELSON … they’ll be needing them.”

In football practice in the ninth grade, Lee Roy stood out for his hard tackling, which he considered essential in preparing for the real games. I always hated to have him tackle me, although when I was slow to get up he eagerly would smile and lend me a helping hand. In midseason Lee Roy broke his arm in a particularly tough games. But he refused to come out of the game until the coach forced him to go to a local hospital. I knew then that there was a difference in Lee Roy’s and my attitudes about some things. If I had broken my arm, I would never have attempted to remain in the game.

For much of junior high school after the school day and athletics were over, Lee Roy and I would walk home together, many times with other friends. During our walks we had plenty of time to talk about sports, girls and grades. We also had time to kick rocks, step on empty soft drink cans and daydream about our future.

At the end of the ninth grade Lee Roy received the DAR Citizenship award for boys and I was the runner-up. Lee Roy and I eagerly looked forward to our years in high school and college, including the friendly competition that would continue for years.

During our senior year in high school, we were in the same P.E. class and participated in a national fitness test. One of the events was to see how far you could throw a softball. I was the lead contender for first place with a throw of 85 yards. But then Lee Roy stepped up and threw the ball 90 yards to win the event. Years later I thought back to that contest when I learned that Lee Roy had destroyed a machine-gun bunker in Vietnam by hurling hand grenades at the enemy emplacement.

In the fall of 1963, Lee Roy and I, along with many of our high school classmates, began college life in our hometown Texas Technological College, now Texas Tech University. By then both of us had become more serious about life, particularly after the assassination of President John F. Kennedy. We primarily focused on school, working for spending money, dating and considering how we wanted to handle our military commitment. Lee Roy was majoring in government and I was a pre-law major.

By the end of our freshman year Lee Roy had decided to join the Platoon Leaders Class officers’ program of the Marine Corps. Early in the fall semester of 1965 I ran into Lee Roy on Tech’s campus. I sought his advice and he recommended the same Marine Corps program he was enrolled in. In my usual thoughts of “if Lee Roy can do it, so can I,” I quickly joined Oct. 21, 1965. Later on I wondered if I had been too impetuous in signing up — especially in the Marine Corps.

On June 13, 1966, Lee Roy and I boarded a plane at Lubbock’s airport to fly to Washington, where we were met by some “friendly” Marines who transported us 35 miles south to Quantico. Lee Roy had just one six-week training course to complete since he had completed the first six-week session in 1964. Since I had only one summer remaining before my senior year, I was scheduled for a 10-week combined course. Lee Roy finished first in his class; Company Honor Man. I was happy just to complete the tough training and graduate.

In the spring of our senior year I volunteered for and was accepted into a Marine Corps law program. I preferred to do my military service as a judge advocate officer. Lee Roy was adamant to serve as an infantry officer on the front lines in Vietnam. As the summer of 1967 rolled into high gear, Lee Roy prepared to go on active duty and I prepared to attend law school.

For the first time since we met in 1957, Lee Roy and I parted company, adopting differing views on Vietnam and our military commitment. I was concerned about how Lee Roy would fare in Vietnam, especially given his fearlessness, But as a newly married first-year law student, I didn’t dwell on his situation too much.

After Lee Roy had completed The Basic School in Quantico, he was transferred to Monterey, Calif., to attend defense language school. Early in 1968 Lee Roy called me to tell me he was getting married, and asked me to come to the wedding in Lubbock. I reluctantly said I could not attend; the date was right in the middle of law school final exams. We all have made decisions we later regretted, and not attending Lee Roy’s wedding is one of my deepest regrets.

Lee Roy did extremely well in military defense language school, and his mother told me that he was offered the opportunity to serve in Washington as a Vietnamese language translator. But Lee Roy believed that God was calling him to serve in Vietnam with the front-line Marines, and he refused the job.

Lee Roy was by then a first leutenant and was assigned to Headquarters & Service Company, 3rd Marine Division, at the large Vandegrift Combat Base. Lee Roy requested to be transfered to a company of Marines on the front lines, and he was sent to Alpha Company, 1st Battalion, 9th Marines, 3rd Marine Division.

Lee Roy maintained his strong faith in God’s purpose and destiny for him. On Jan, 26, 1969, he flagged down a resupply helicopter going over 10 miles of enemy territory from his assigned Fire Support Base Shiloh to Fire Support Base Razor, to attend a makeshift church service held in a bomb crater. Lee Roy is the only person I know who would fly over enemy territory just to attend church.

Lee Roy’s excitement with being in a combat situation echoed in a Feb. 18, 1969, letter to his close friend, Charles Lance:

“Don’t spread this around – but ole Herron is right in the middle of a slam-bang, ROCK‘EM , SOCK‘EM operation. The entire regiment is within 5,000 m of Laos; I’m presently 2,500 m. This OP is designed to stop the flow of supplies from Laos down South to the A Shau Valley. According to the ‘ole hands,’ we’ve hit more resistance on this OP than the battalion has encountered since Khe Sanh (about a year ago).”

“I’m used to fire fights by now. It’s amazing how one adapts to this madness –- the blood, etc., doesn’t bother me at all.”

On Feb. 22, 1969, Alpha Company was ambushed and Lee Roy was killed, saving the lives of numerous other Marines. For his actions he posthumously received the Navy Cross. Here is how Lee Roy’s company commander, then 1st Lt. Wesley Fox (who received the Medal of Honor for his actions in the same battle), described Lee Roy’s death to his widow, Danelle Herron, in a March 12, 1969, letter:

“Lee was doing a great job as my Company Executive Officer and was loved by the troops.

... On 22 February our company was on patrol and moved into the attack on a known North Vietnamese position. They were in bunkers and had a good machine gun defense. My command group was hit by a mortar round, which also wounded the 2nd Platoon Leader.

Lee took command of the 2nd Rifle Platoon and led them in the attack on the machine gun positions. His last words to his radio operator were ‘I am going to get that gun’ and with that he jumped up firing and throwing hand grenades until he did knock out the gun position. A supporting enemy machine gun then hit Lee high in the chest and he died instantly.”

“Lee loved you very much as he spoke of you often and always had your picture handy. He loved God and his country and for these three things he died. He died a Marine hero.”

Lee Roy’s mother, Lorea Herron, said her son “died doing what he always wanted to do — defend his country.”

He left behind a “just in case” letter for his parents just before he went to Vietnam.

“When you read this I’ll be dead or missing in action. This letter is my way of saying goodbye and is a final thank you for being such wonderful parents. Please believe me when I say that I have no regrets. I was given the best parents that a child could have. I was taught to love God and our country, and since it was God’s will that I die young, I’m proud to die as a Marine defending America.”