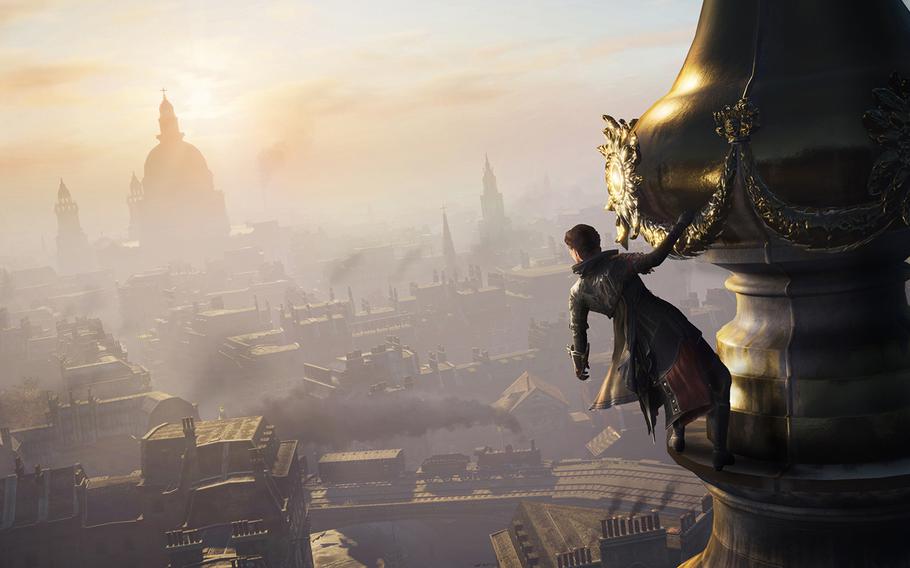 "Assassin's Creed Syndicate" takes place in London as the battle between the freedom-loving Assassins and the order-minded Templars rages on. (Ubisoft)

"Assassin's Creed Syndicate" takes place in London as the battle between the freedom-loving Assassins and the order-minded Templars rages on. (Ubisoft) 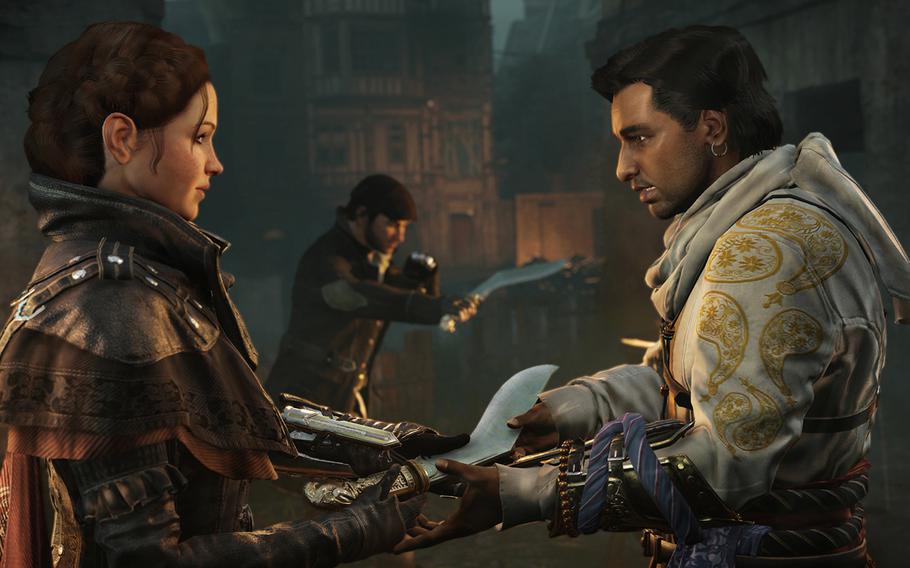 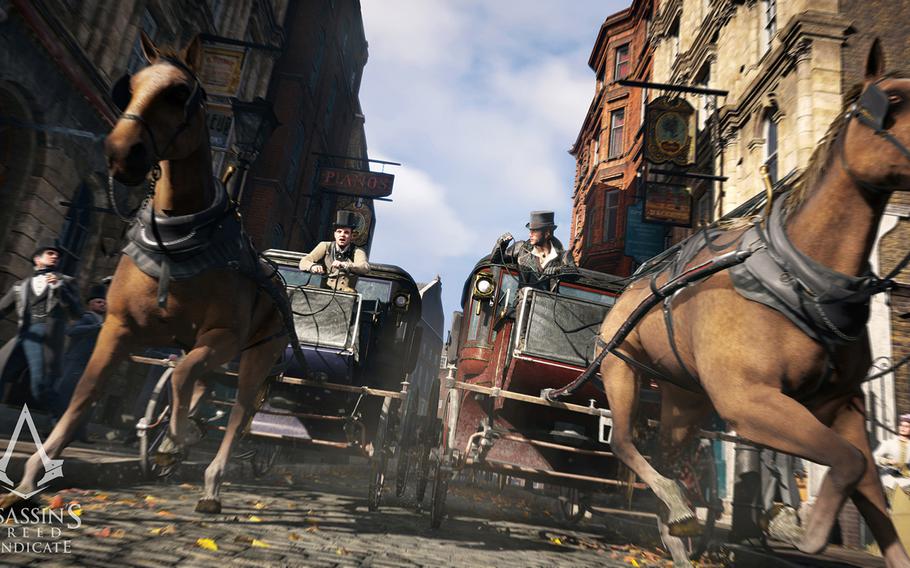 This version of Assassin's Creed features a new method of movement -- the horse-drawn carriage. It’s a speedy way to cross London. In many cases, you need to drag a carriage driver from his seat and commandeer his wheels. If you’re spotted by members of the Templars’ gang — the Blighters — or wary police, a freewheeling chase ensues. (Ubisoft) 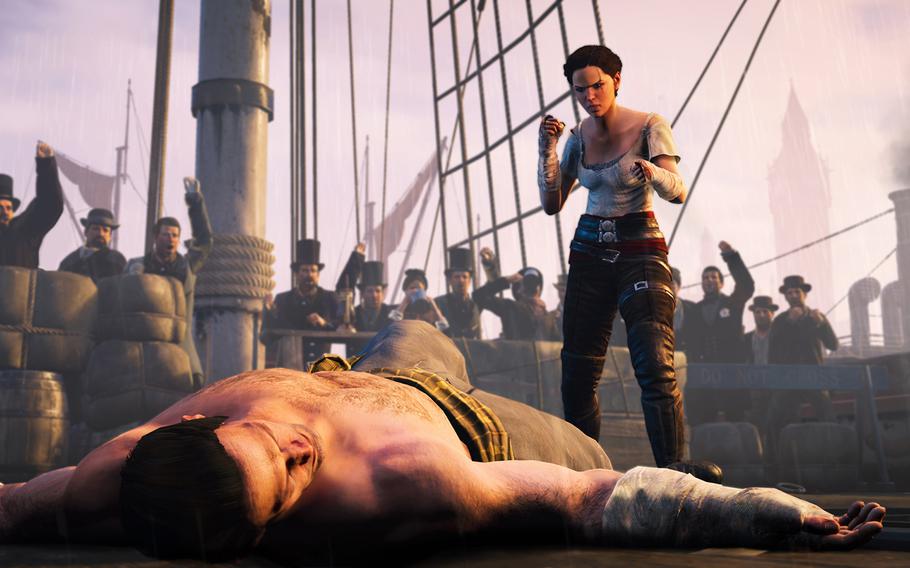 Evie Frye's skills lean toward subtlety and stealth in “Assassin's Creed Syndicate,” but she can brawl if she has to. There are a number of interesting and fun side missions, as with this boxing match. (Ubisoft)

Victorian-era London was the refined capital of an empire that stretched around the globe. It was also home to grinding poverty and rampant crime.

The grittier elements dominate the London of “Assassin’s Creed Syndicate,” Ubisoft’s latest episode in the long-running war between the freedom-loving Assassins and the order-minded Templars.

You play as Jacob and Evie Frye, twins who were trained by their Assassin father outside of London. They decide to head to the big city to end a century of rule by the Templars, who have built a commercial powerhouse on the backs of poor workers and child laborers. It’s a dismal place, filled with wretched slums and factories belching smoke.

Jacob is obsessed with forming a gang that can confront the Templars’ own gang head-on. He’s a man of action and violence. On the other hand, Evie is focused on finding a mystical object that’s rumored to have incredible healing powers. Her skills lean toward subtlety and stealth.

As in previous games, their efforts primarily involve undermining Templar plans, assassinating enemy leaders and strengthening Assassin associates for the final showdown. And this, of course, involves a lot of climbing up the sides of buildings, leaping across rooftops and hiding in shadows. And there’s a Victorian selection of Assassin’s blades, knives and guns suitable for either a silent kill or a loud brawl.

Aside from the fact that you get to alternate between two lead characters, the biggest change to gameplay is how the heroes move around the expansive cityscape.

The most impressive addition is a wrist-mounted grappling device that allows you to zoom up the sides of buildings or zip from one rooftop to another. It’s terrific fun and a great timesaver for longtime fans who have spent countless hours clambering up walls and running along rooflines.

Another new means of movement is the horse-drawn carriage. It’s a speedy way to cross the city. It also makes the game feel like “Grand Theft Carriage” at times. In many cases, you need to drag a carriage driver from his seat and commandeer his wheels. If you’re spotted by members of the Templars’ gang — the Blighters — or wary police, a freewheeling chase ensues. Fortunately, no one seems to mind if streetlights, carriages, horses or pedestrians are left crumpled in your wake.

This all unfolds is a new setting that’s far different from the locations featured in the past two adventures. “Black Flag” was a rollicking pirate adventure set in the sunny Caribbean. And “Unity” was a tale of intrigue set in a Paris beset by revolution, but vibrant nonetheless. In “Syndicate,” lively neighborhoods and colorful sights are few. London’s buildings are generally brown and gray — or “grey,” since it’s England. The edges are tinged with rust and decay. The skies are often overcast and the streets are often slick from rain. The streets are teeming with beggars, orphans, drunks and street vendors. These are all depicted in terrific texture and detail, giving the city more depth than most of its predecessors. However, I have to admit that I had much more fun sailing the high seas in “Black Flag.” And the luxurious palaces and medieval churches of Paris were a joy to behold in “Unity.”

The same applies for the protagonists. Jacob and Evie are two of the most interesting Assassins in the series’ history. Their story is compelling, their relationships are complex and they actually seem to develop as the game progresses. But it’s really not as fun to be a gang leader as a pirate.

Like its predecessors, “Syndicate” is packed with historical characters who play roles in the action. For example, Alexander Graham Bell will make gadgets for you and Charles Dickens will send you on ghost-busting missions. And in a move that raises questions about the developers’ interpretation of history, you can help organize workers for Karl Marx, the father of communism.

In addition to these optional quests, the game has a large number of side missions that focus on Jacob’s effort to wrest control of the city streets from the Blighters. These include liberating child laborers, assassinating bosses and attacking bases. When you have completed all of the missions in a given district, the local boss and his gang show up for a full-blown battle over the turf. The basic concept isn’t new to the series, but the missions are much more interesting and fun this time around.

The movement and combat controls have been tweaked slightly to make them more efficient. In addition, the underlying mechanics seem to be much smoother. I remember many occasions in the previous game — “Assassin’s Creed Unity” — where my character didn’t always respond the way I had intended.

The game earns its mature rating for violence and mature themes.

Bottom line: A- “Assassin’s Creed Syndicate” offers engaging action and some of the most interesting characters in the series’ history.

Ubisoft provided a review copy of the game.