Turkey halts its airstrikes against Islamic State fighters in Syria 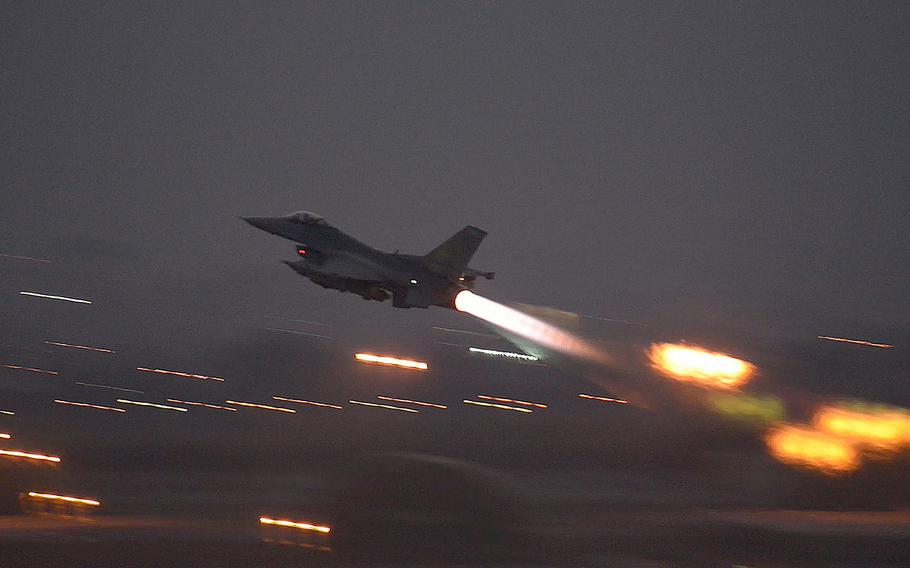 An F-16 Fighting Falcon takes off from Incirlik Air Base, Turkey, in support of Operation Inherent Resolve on Aug. 12, 2015. (Krystal Ardrey/U.S. Air Force)

WASHINGTON — Turkey has stopped conducting airstrikes against Islamic State fighters in Syria as U.S. air operations ramp up from Incirlik Air Base, the Pentagon said Friday.

Turkey began bombing Islamic State fighters in Syria and Kurdistan Workers Party (PKK) camps in northern Iraq in late July in response to a suicide bombing that killed more than 30 in the southern Turkey border town of Suruc.

Turkey’s air campaign was criticized for concentrating more on the Kurdistan Workers Party (PKK) camps in northern Iraq instead of on the Islamic State, and for potentially targeting the U.S.-allied People’s Protection Units (YPG), a Kurdish militia in Syria. The airstrikes complicated the U.S. counter-Islamic State campaign in Syria, which relies heavily on the YPG participation to push back the Islamic State and coordinate airstrikes against the militant group there.

“Turkey continues to communicate to us that they are committed to participating in the counter-[Islamic State] campaign,” said U.S. Central Command spokesman Col. Pat Ryder.

“In the meantime – they agreed to not undertake independent counter-[Islamic State] strikes in Syria so that we can ensure that we are deconflicting and conducting safe air operations,” Ryder said.

“They have stopped doing any counter-[Islamic State] flights until we finalize some of the details in terms of how they will be part of the coalition air campaign,” he said.

It was not immediately clear whether Turkey had also agreed to pause its air campaign in northern Iraq. Ryder said that the U.S. recognizes Turkey’s right to defend itself against the PKK, and “from our perspective there is no connection between this deeper cooperation against [the Islamic State] and their operations against the PKK.”