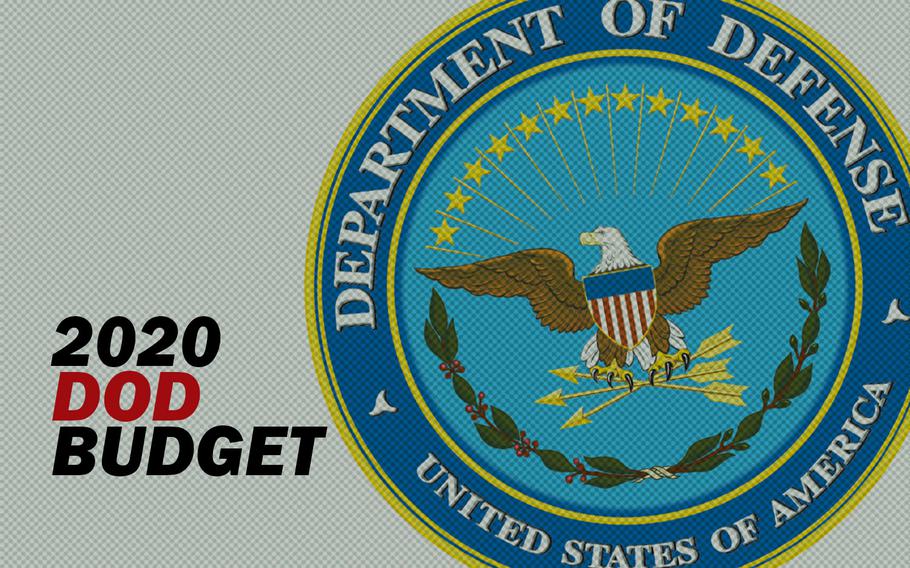 President Donald Trump’s plan to boost defense spending for the third consecutive year — including some $32 billion for nuclear programs run by the Department of Energy for a total of some $750 billon for national defense — calls for a more than $33 billion increase from fiscal year 2019 defense spending allocated by Congress. ()

WASHINGTON — The Pentagon on Tuesday unveiled its largest-ever budget request, asking Congress for $718.3 billion that emphasizes the need to modernize the aging U.S. inventory of weapons, begins building a Space Force and would boost troop pay by 3.1 percent.

President Donald Trump’s plan to boost defense spending for the third consecutive year — including some $32 billion for nuclear programs run by the Department of Energy for a total of some $750 billion for national defense — calls for a more than $33 billion increase from fiscal year 2019 defense spending allocated by Congress. The Pentagon’s budget proposal for fiscal year 2020 was released one day after the White House unveiled its $4.7 trillion spending plan for the federal government next year, which would cut domestic spending and foreign aid contributions.

Senior defense officials described their budget plans as “a major milestone” in preparing the military for the great-power competition that they believe will shape the Pentagon’s needs for years to come as rival nations Russia and China build new classes of weapons and seek to challenge the United States’ long-held global dominance.

The budget is the first of the Trump administration’s to focus primarily on potential conflict with near-peer adversaries over the conflicts American troops have been fighting for nearly two decades in places including Afghanistan, Iraq and Syria, the officials said. Acting Defense Secretary Pat Shanahan, who largely shaped the budget plans in his former role as the department’s No. 2, has referred to the 2020 budget proposal as the Pentagon’s “masterpiece.”

"If we want peace, adversaries need to know there is no path to victory through fighting us," David Norquist, who is performing the duties of undersecretary of defense, said Monday of the budget proposal’s focus on potential conflict with Russia or China.

But even with some key lawmakers’ endorsement of Trump’s plans to hike defense spending, analysts who closely monitor the Pentagon’s budget predicted the 2020 proposal was unlikely to pass muster on Capitol Hill. A major hurdle for the spending plan is the use of the Overseas Contingency Operations account, the Pentagon’s war chest of money to be spent for combat operations that is kept separate from its base budget, for basic defense functions. Another hurdle is the more than $3 billion in the proposal to help fund Trump’s wall along the U.S.-Mexico border.

Todd Harrison, the director of defense budget analysis at Washington think tank the Center for Strategic and International Studies, described the Pentagon’s attempt to funnel nearly $100 billion in base spending through the OCO account as a “gimmick.” Analysts at the conservative think tank American Enterprise Institute also criticized the OCO plan, as well as the use of Pentagon funds for Trump’s border wall and described the overall spending proposal as “flat.”

The budget proposal “continues to repair military readiness, but that’s it,” AEI analysts Mackenzie Eaglen and Rick Berger wrote Monday. “A flat budget only treads water … and continues the familiar approach of punting today’s problems to the future.”

In its request, the Pentagon asked Congress for $545 billion in base defense spending and roughly $66.7 billion to fund ongoing war-fighting and major training operations including in Afghanistan, Syria, Iraq and in eastern Europe, where American troops train with NATO partners to deter Russian aggression.

But the Defense Department also asked for another $98 billion in what it described as OCO funds “for base requirements,” money for things such as ammunition and until-level training exercises that typically would be included in its base request.

The use of OCO money for base functions is designed to skirt congressionally mandated budget caps first introduced in the Budget Control Act of 2011. Those caps, now set at $576 billion, were designed to keep defense spending in check with domestic spending. Elaine A. McCusker, the Pentagon's deputy comptroller, said the OCO structure was determined by the White House’s Office of Management and Budget.

The fiscal year 2020 budget proposal also adds a new account, described as an emergency fund that would replenish any military construction funding used in 2019 to pay for Trump’s border wall and to rebuild installations damaged last year by hurricanes. That fund of $9.2 billion also includes some $3.6 billion earmarked for new southwest border wall construction next year, should Trump demand it.

Despite the budget structure, the proposal outlines the Pentagon’s priorities.

It would boost end strength with a moderate increase of about 7,700 troops, bringing the military to a total of 2,140,300 troops, including active duty, reservists and National Guard members.

The proposal includes the largest boost in research and design since World War II, according to Pentagon documents. It proposes spending $3.7 billion to developed unmanned and autonomous systems, nearly $1 billion on artificial intelligence and machine learning technology, $2.6 billion for hypersonic missile development, and some $235 million to research and test directed energy systems, such as laser weapons.

It pours $14 billion into space functions — including $72.4 million to establish the headquarters of the Space Force, Trump’s proposed sixth military branch — in an effort to improve satellite communications and space-based defense systems. It includes another $9.6 billion for cyber operations meant to improve offensive and defensive cyberspace operations, improve network security and modernize the Pentagon’s cloud-based systems.

The budget would invest another $14.6 billion in ground-based vehicles. It would add more than 4,000 Joint Light Tactical Vehicles, the replacement for Humvees, to the Army and Marine Corps for $1.6 billion. It would modernize 166 M-1 Abrams tanks for $2.2 billion, add 56 amphibious combat vehicles for $400 million and 131 upgraded armored personnel carriers for $600 million.

For troops, the 3.1 percent raise would be the largest since 2010, when troops received a 3.4 percent income boost.

The proposed raise next year would provide junior enlisted soldiers with a more than $700 income boost. It would amount to a raise of more than $2,300 per year for an O-3 grade officer who has served for eight years. The raises would come in January, if Congress chooses to enact them.

While Senate Republicans praised the increase in defense spending, the Pentagon’s 2020 budget proposal is expected to be a hard sell for the Democrat-controlled House of Representatives. Rep. Adam Smith, D-Wash., the chairman of the House Armed Services Committee, for example, has previously said yearly hikes of defense spending are unrealistic, telling reporters in December that he expected the military to do more with less money.

Meanwhile, Sen. Jim Inhofe, R-Okla., the chairman of the Senate Armed Services Committee, said Monday that he was on board with the president’s $750 billion defense budget proposal, but he stopped short of endorsing its use of OCO funds to stay below budget caps, calling instead for Congress to lift them.

“This top line makes the needed investment in our national defense and meets the recommendations of the National Defense Strategy Commission to provide real growth to the defense budget,” Inhofe said in a statement. “… In order to ensure our military gets the investment it desperately needs, we must work immediately to raise the budget caps — or exempt defense from the caps — so we can ensure the top line defense budget rightfully reflects our priorities.”