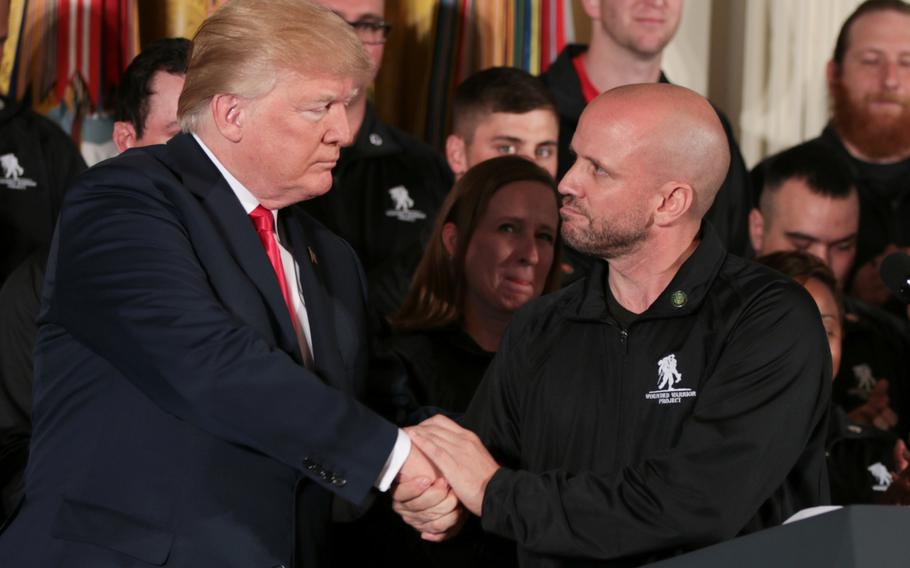 The Soldier Ride brings together injured veterans and, with the help of the nonprofit WWP, outfits them with specialized bikes for a four-day event in the capital region. Since the program began in 2008, presidents George W. Bush, Barack Obama and Trump, for the second time, have hosted the participants at the White House.

“Each of you is part of the long, unbroken chain of courageous Americans who have answered the call in every generation,” Trump told the group. “You are the proud, beating heart of our magnificent nation.”

The veterans came from each branch of service. Some, like brothers Deven and Erik Schei, represented that “unbroken chain” more than most. The Schei brothers, Army sergeants and combat engineers, had followed closely in the footsteps of their father, who was a combat engineer.

“We carry on the legacy as much as possible,” Deven said after Thursday’s meeting at the White House.

Deven and Erik share another bond, as combat-injured veterans.

Erik is a quadriplegic after being shot in the head while on patrol in Iraq in 2005. Deven, then a member of the 101st Airborne, was hit by recoilless rockets in a 2010 ambush in Kandahar, Afghanistan.

That attack almost cost Deven one of his legs and left him with post-traumatic stress disorder and spinal damage, among other ailments. In 2012, he told Stars and Stripes that he’d had 18 surgeries.

“Soldier Ride is actually my first road to recovery; it was the first program I did outside of the hospital after my injury,” Deven said. “They gave me an opportunity to do something bigger than myself, and to build a special bike for my brother and me to ride together.”

Deven has been involved with the Wounded Warrior Project since his brother’s injury, and become even more involved after his injury five years later. He’s now a spokesman and speaker for the nonprofit. The Soldier Ride was an instrumental part of his healing process, he said.

“That road to recovery, I owe it all to the warriors that were there and the staff of the Wounded Warrior Project that never left my side,” he added.