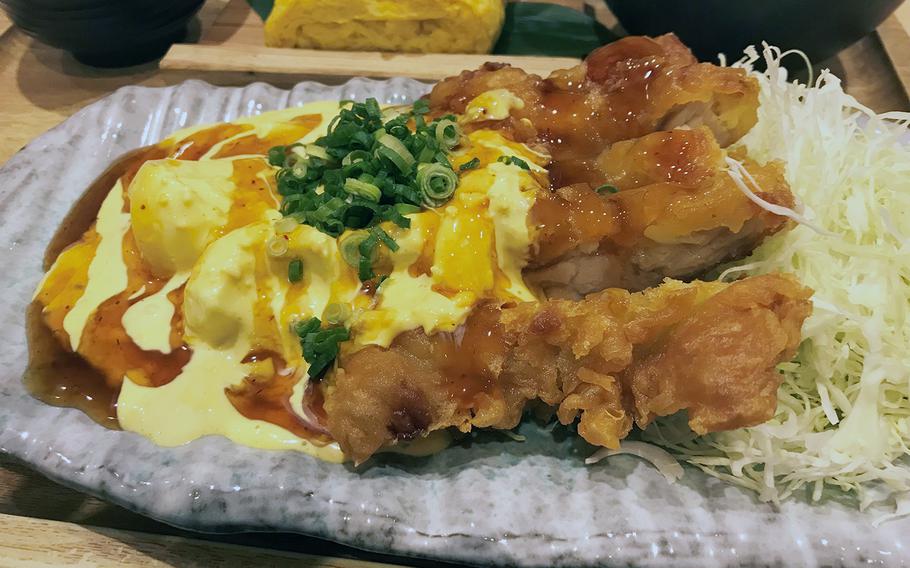 The chicken nanban at Toritama in Yomitan is a bit heavy but has put this Okinawa chain on the map. (Matt Burke/Stars and Stripes)

The chicken nanban at Toritama in Yomitan is a bit heavy but has put this Okinawa chain on the map. (Matt Burke/Stars and Stripes) 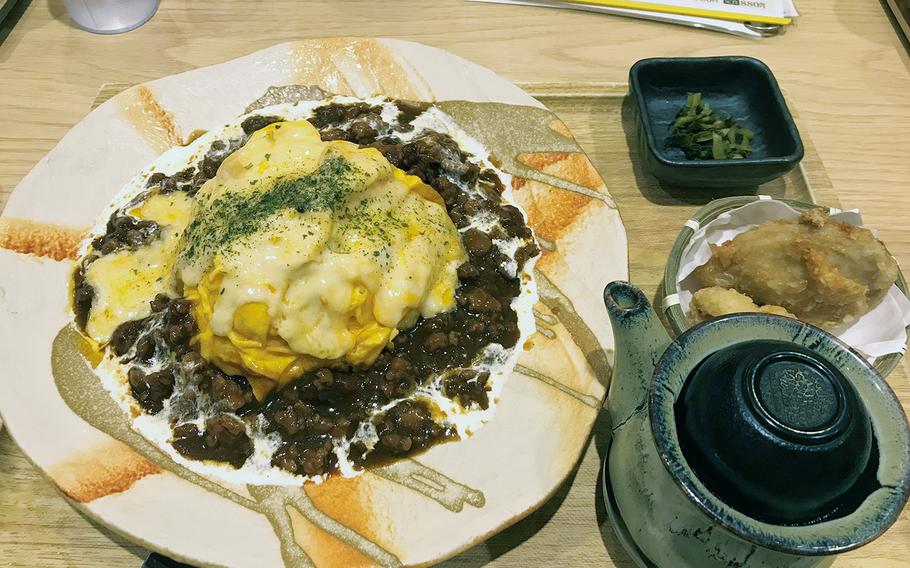 This set from Toritama in Okinawa, Japan, includes a chicken omelette on rice with a demi-glace sauce and cheese. (Matt Burke/Stars and Stripes)

Chicken nanban might not seem like a novel concept, but in 1965 when the chefs at Ogura restaurant in Miyazaki first put tartar sauce atop their fried chicken — already slathered in sugared vinegar — it started a culinary revolution.

Nowadays, the dish that was born on Kyushu can be found across Japan, from Hokkaido to Okinawa.

On Okinawa, the Toritama restaurant in Yomitan is making its mark. Toritama literally means chicken and egg, and the Okinawa chain’s Yomitan location focuses on showcasing the best of the two ingredients.

The Yomitan location feels like a pop-up shop. It is compact, quaint and has about half the menu of the Awase location, which closed earlier this year.

Although the Yomitan location is downsized in comparison, the true star of the show remains: Toritama’s renowned chicken nanban, topped in its signature golden tartar sauce.

Meals at Toritama are affordably priced and come in massive portions. Small dishes can start as low as 450 yen (about $4.16) and sets can cost as much as 880 yen.

Sets include a choice of rice, soup and tamagoyaki — a Japanese rolled egg omelet.

Toritama literature says the company is guided by several principles that help it stand out. It uses eggs only from environmentally safe and sustainable suppliers, and it harvests the eggs used in its dishes the day they are served.

Toritama soaks its chicken in saltwater before cooking, which ensures a tender and juicy bird, and it adds a proprietary soup stock to its tamagoyaki, which gives it a unique flavor and fluffy composition.

The Toritama take on the Japanese staple, nanban, includes a massive piece of crispy fried chicken, which seemed like an entire chicken breast had been pounded out, fried, sliced and doused in sugared vinegar.

Then it was drowned in a heaping helping of golden yellow tartar sauce. Upon closer inspection, the sauce appears to have been blended with hard-boiled eggs, which would explain the texture and color.

A sign on the wall said that Toritama designed its tartar sauce to be a little sweet because that is the best combination to put on rice.

The nanban, which goes for 680 yen, or $6.29, by itself, also includes salad. The set goes for $8.14, comes with a choice of rice, white or grain, chicken stock or miso soup, and a choice of four types of folded egg omelet.

The nanban was delicious and hit all the right notes. The chicken was tender and juicy and the batter crispy; the sugared vinegar was sweet; and the tartar sauce added some tang.

Adding the eggs to the sauce makes the dish incredibly heavy, but it tastes great. Bring an appetite and you should have no problem cleaning that plate.

The add-ons were harder to finish after polishing off the nanban, but the soup, rice and tamagoyaki were also of the highest quality.

Toritama’s chicken omelet on rice with a demi-glace sauce and cheese was colorful but equally delicious. It was essentially one of Toritama’s tasty omelets topped with cheese, on a bed of rice. Ground chicken cooked in a sweet demi-glace sauce was then spread around the sides.

The chicken was not overcooked, and the sauce was flavorful and sweet, with just the right amount of seasoning. The egg was fluffy and while the dish might not win any awards for presentation, it is a prime example of Japanese comfort food.

Toritama also offers a selection of chicken and egg bowls, called “domes” in Japan, where the protein comes on a bed of rice, chicken skillets, fried chicken sets and chicken noodle sets.

Beverages are kept simple with limited choices of water and tea for free and beer and juice for purchase. They also offer homemade pudding and ice cream for 200 yen, or $1.85.

The beautiful thing about chicken nanban is that while it might seem simple, virtually no two nanbans are the same. Every chef has his or her own take.

Toritama might look like a fast food chain or a ramen shop from the outside, but its version of Miyazaki’s most famous culinary contribution is unique and must be ranked with the best.

Directions: About a mile past Kadena Air Base on the right-hand side of Route 58