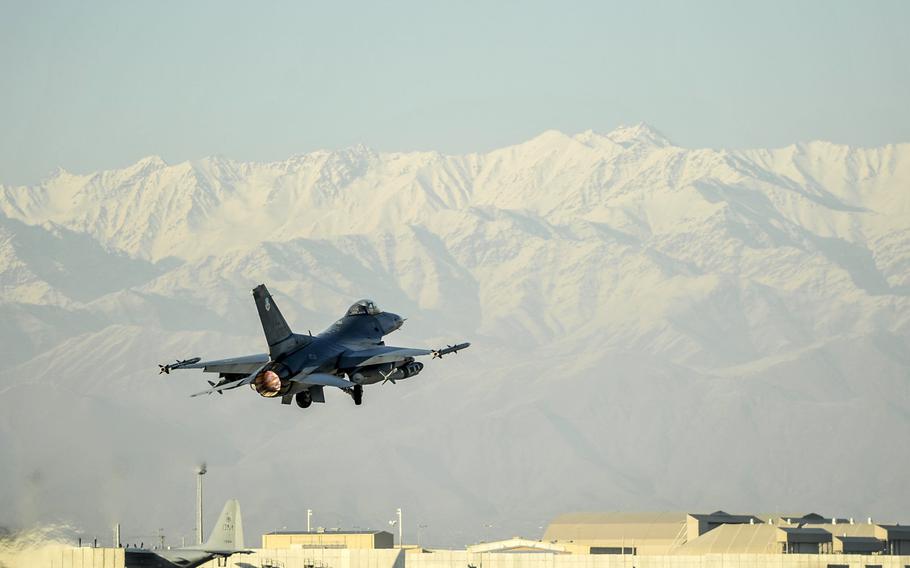 An F-16 Fighting Falcon from the 421st Expeditionary Fighter Squadron launches for a combat sortie at Bagram Air Field, Afghanistan, Feb. 1, 2016. The 421st EFS, based out of Bagram, is the only dedicated fighter squadron in the country and continuously supports Operation Freedom?s Sentinel and the NATO Resolute Support mission. (Nicholas Rau/U.S. Air Force)

An F-16 Fighting Falcon from the 421st Expeditionary Fighter Squadron launches for a combat sortie at Bagram Air Field, Afghanistan, Feb. 1, 2016. The 421st EFS, based out of Bagram, is the only dedicated fighter squadron in the country and continuously supports Operation Freedom?s Sentinel and the NATO Resolute Support mission. (Nicholas Rau/U.S. Air Force) 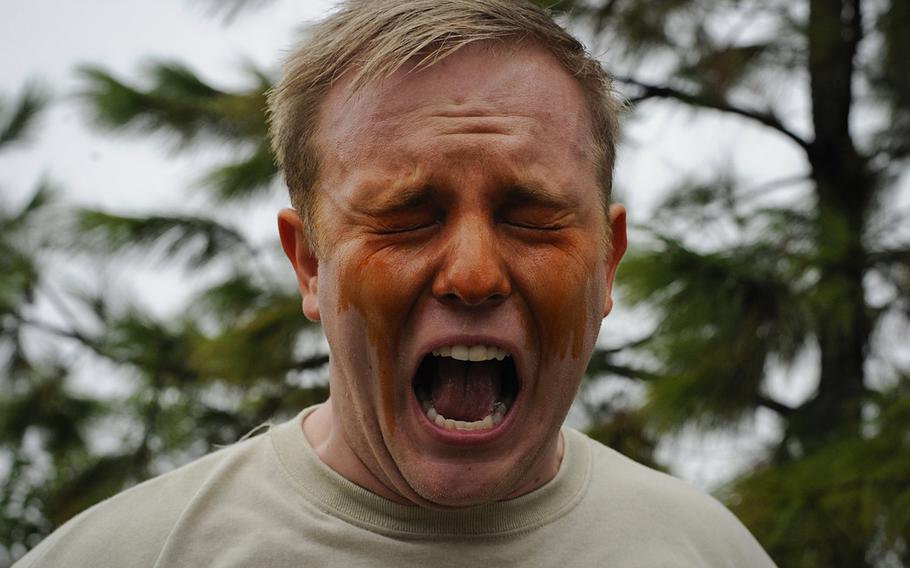 Senior Airman Beau Bartulis, a military working dog handler with the 6th Security Forces Squadron, reacts to pepper spray after opening his eyes during training at MacDill Air Force Base, Fla., Jan. 28, 2016. The training taught airmen how to react and detain an individual if they were to be sprayed while on duty. (Mariette Adams/U.S. Air Force) 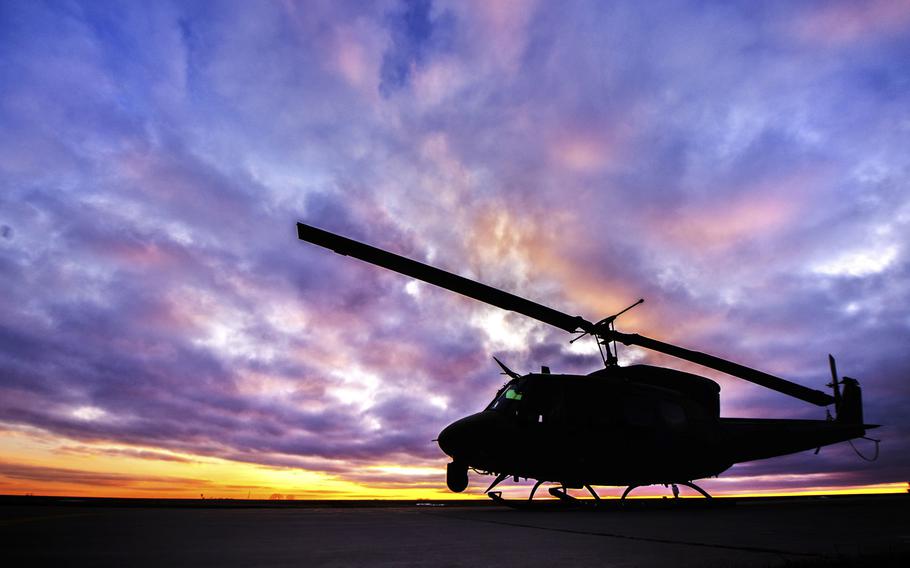 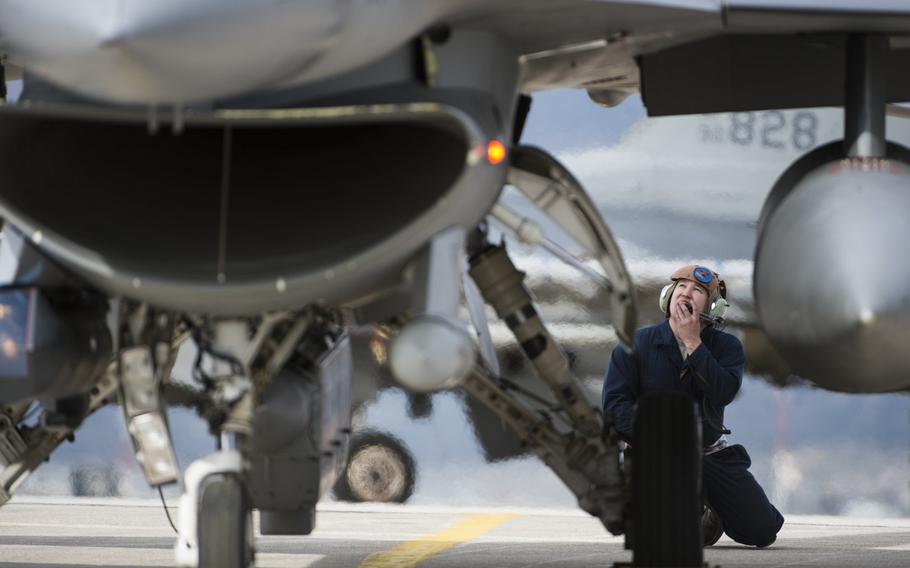 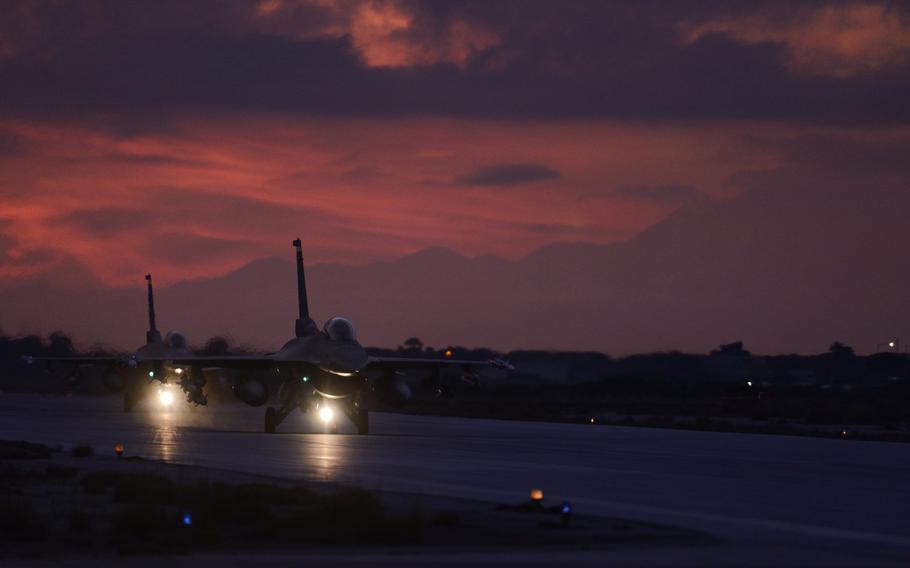 U.S. Air Force pilots from the 480th Expeditionary Fighter Squadron taxi F-16 Fighting Falcon fighters during a flying training deployment on the flight line at Souda Bay, Greece, Jan. 28, 2016. This training is the fourth of its kind between the U.S. and Greek air forces since January 2014. (Christopher Ruano/U.S. Air Force) 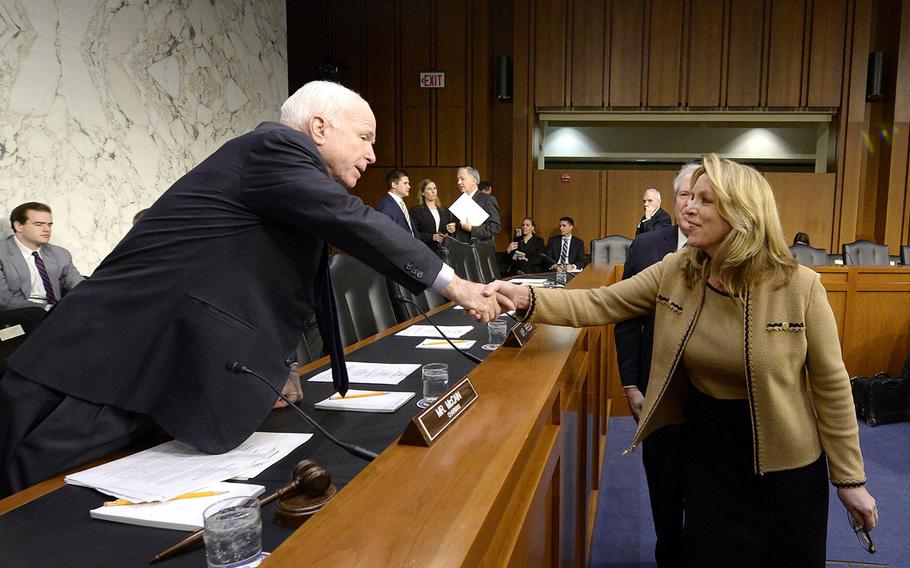 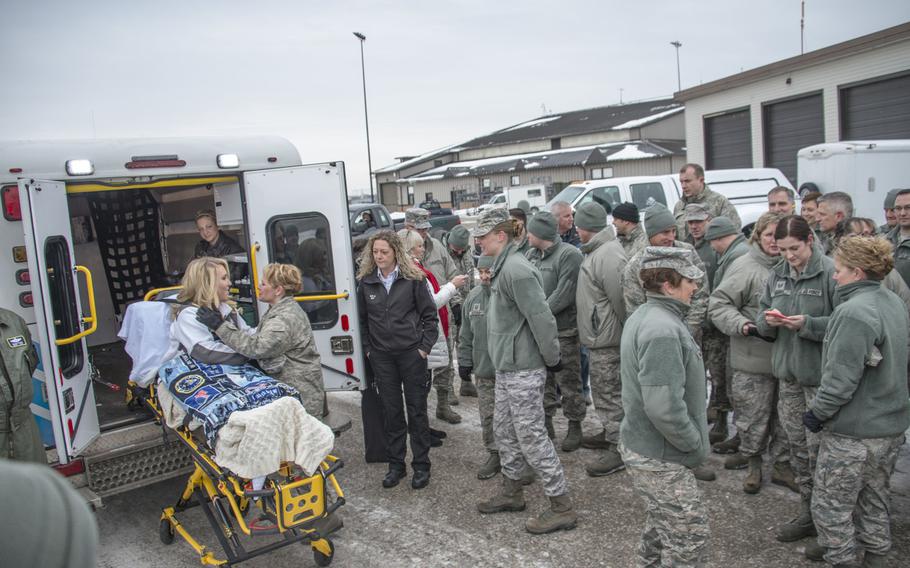 Wounded airman Staff Sgt. Taylor Savage is greeted by nearly 100 members of the 133rd Airlift Wing to see her off on her return flight to Scott Air Force Base, Ill., Jan. 27, 2016. Savage and her mother needed assistance transporting her from the hotel to the aircraft upon leaving Minnesota because she has to be transported by litter. Members throughout the 133rd Airlift Wing teamed up to help pack her things, transport her and her belongings and get her on a flight back home. (Lynette Olivares/U.S. Air Force) 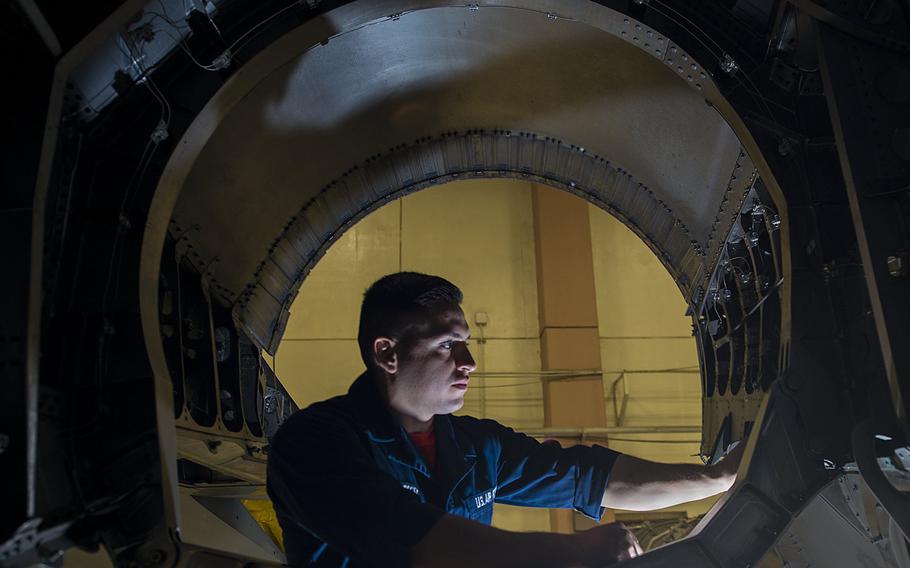 U.S. Air Force Airman 1st Class Jorge Pauker, 18th Equipment Maintenance Squadron inspection section team member, inspects the back of an F-15 Eagle after the engine was pulled out, Jan. 28, 2016, at Kadena Air Base, Japan. The aircraft is in phase, which is where it is pulled into a hangar and pulled apart to inspect every function. (Corey Pettis/U.S. Air Force) 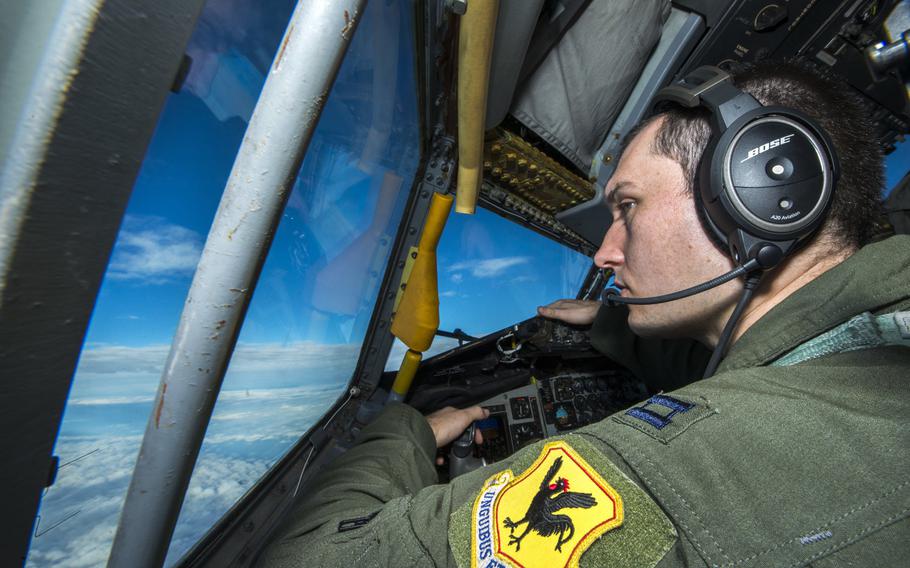 U.S. Air Force Capt. Christopher Thompson, 909th Air Refueling Squadron KC-135 Stratotanker pilot, scans the horizon for other aircraft during Forceful Tiger, Jan. 28, 2016, near Okinawa, Japan. The 909th ARS, which is charged with supplying fuel to other aircraft in flight, delivered a total of 1.3 million pounds of fuel to more than 130 aircraft during the large force exercise. (Maeson Elleman/U.S. Air Force) 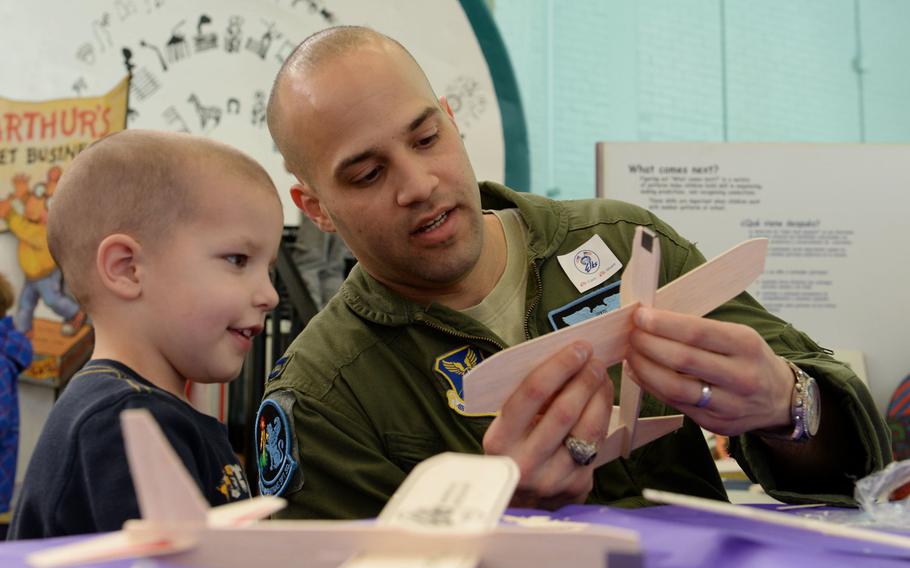 Capt. Hansel Rabbell, 28th Operations Support Squadron chief of wing scheduling, explains the a toy glider to Tonda Winifred-Morris during the 2016 Aviation Day at the Discovery Center in Pierre, S.D., Jan. 27, 2016. This was the third annual event of its kind, and is one of several youth events organized by the Elks Lodge. (Rebecca Imwalle/U.S. Air Force) 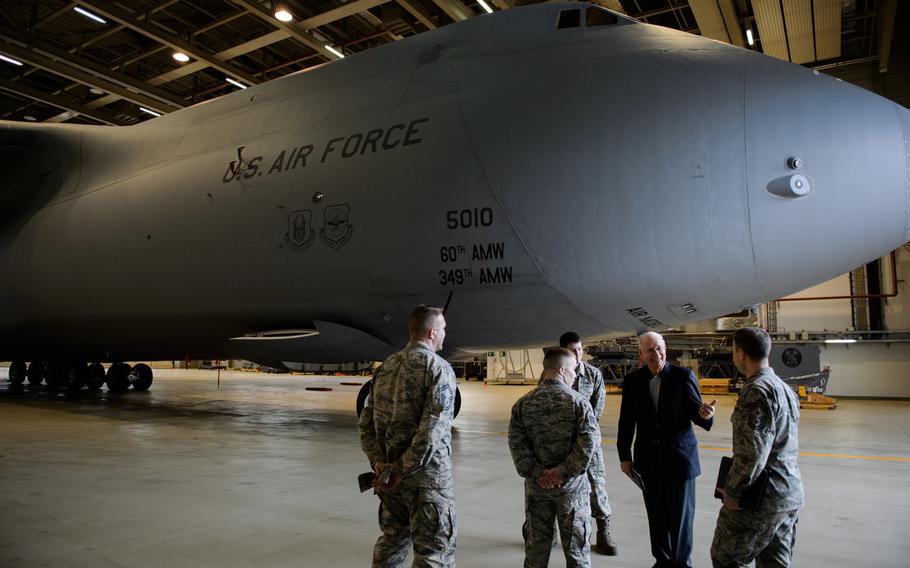 Sam E. Parish, retired chief master sergeant of the Air Force, interacts with airmen of the 721st Aircraft Maintenance Squadron, Jan. 27, 2016, at Ramstein Air Base, Germany. Airmen from the 521st Air Mobility Operations Wing had met Parish and discussed the differences from when Parish enlisted and how things are now in the Air Force. (Armando A. Schwier-Mo/U.S. Air Force) 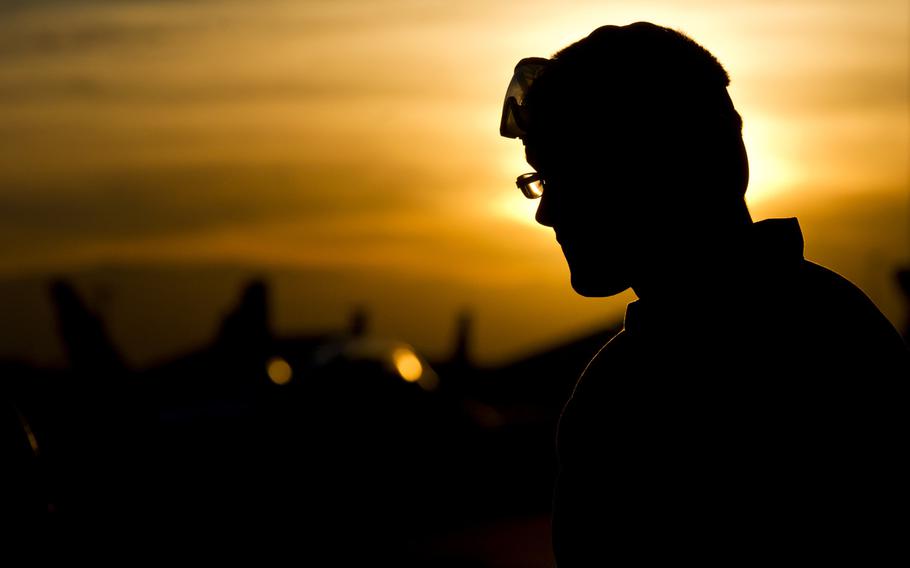