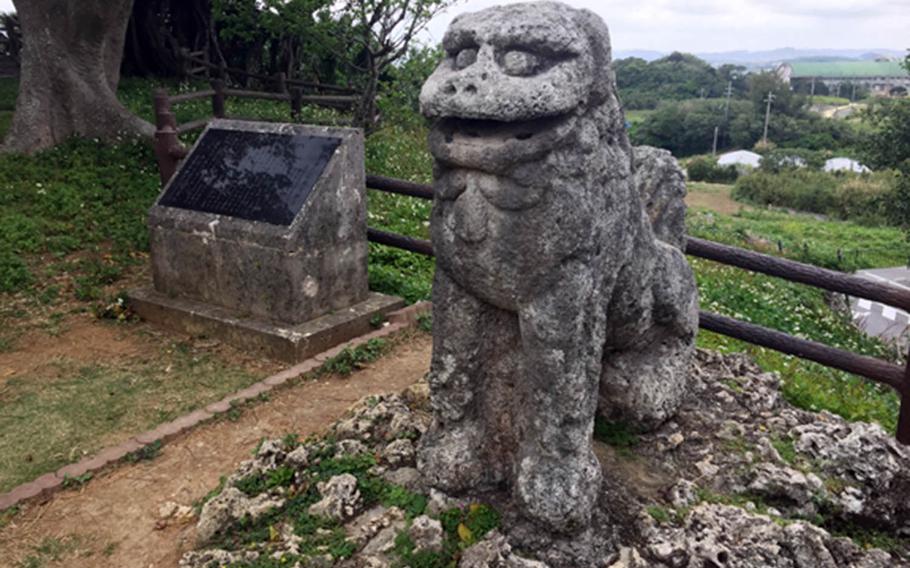 It is an iconic photograph that has come to symbolize the Battle of Okinawa — a pair of GIs huddled behind a menacing stone lion, observing a nearby ridge through binoculars, a handful of their fellow soldiers taking cover nearby.

They are fatigued from battle and their hands, like their uniforms, are caked with dirt. The fog of war settles over the battlefield, which is all around them.

Today, Tomori is a sleepy farm community roughly 30 minutes south of Okinawa’s capital, Naha, on the island’s southern tip. The soldiers and their machines of war are gone, having been replaced by concrete homes, neat rows of growing vegetables, livestock and rusting farm equipment.

Yet Tomori remembers, and the eyes of the elderly follow American visitors intently as they pass through the rolling hills of lime rock and their narrow farm roads.

Locals believe that the Stone Lion of Tomori protected them from the fires that consumed the island during the battle and shielded soldiers from both sides as the bullets flew. It continues to watch over the community from atop a hill.

Being the grandson of a Marine who participated in the Battle of Okinawa, I have always been interested in its history. I had seen the photo but couldn’t have predicted in my wildest dreams that the statue would have survived. After purchasing a book by former Okinawa Gov. Masahide Ota that featured a copy of the photo, I began to research the island’s most famous shisa, which is a symbol of Ryukyu culture.

The Stone Lion of Tomori — the oldest and largest existing stone lion, or shisa, built for village religious service standing at about 5 ½ feet by 4 ½ feet — was erected for fire protection in 1689, according to documents provided by the Yaese Board of Education.

Tomori village suffered from repeated fires in those days. Concerned villagers went to a feng shui master and asked for help. He told them that Mount Yaese was a volcano and “disaster could be prevented if a lion-shaped object was placed facing Yaese,” the documents say.

The villagers erected the stone lion and placed it facing Yaese. From then on, there were no more fires.

Before World War II, young men of the village gathered at the stone lion and danced, praying for protection from flame.

The hill that hosts the giant shisa was the site of fierce frontline fighting during the Battle of Okinawa, as the American military squeezed the island’s Japanese defenders south toward the coast, according to a history book published by the Okinawa Prefecture’s Board of Education.

The Japanese military, which had continued to retreat, positioned its forces near Tomori in early June 1945, the book says. U.S. forces attacked the Yaese ridges with naval bombardment on June 6 and advanced onto Teruya and Zaha. Artillery and tanks were followed by infantry, and Yaese fell to U.S. control on June 14.

Some local historians believe the photo of the GIs and the stone lion was staged after the fighting was already over in Tomori. It remains unclear whether that is true. Staged or not, it remains a powerful image. The lion’s many bullet holes are a testament to the savagery of the fight that took place on that hill.

The lion was designated a prefectural cultural asset in 1974, and dubbed an important resource for folk culture.

On an overcast day in February, the Stone Lion of Tomori sat in solitude in its small fenced-off park atop the hill. The park was empty save for its more than 300-year-old defender, the features on its face weathered by centuries of wind and rain.

There are picnic tables and viewing platforms in the shade of a gigantic akagi tree, where one can see for miles, and a small bridge over a gap in the lime rock. Weeds and tall grasses threaten to swallow the site, but the area is well-maintained.

There, locals continue to pray for protection from fires, and one can even see the ridge that the GIs were looking at through those binoculars all those years ago. Today, its overgrown vegetation helps hide what might have been there in those days, lost in a sea of green.

I crouched behind the stone lion and looked to the ridge. I was immediately transported back in time with my hand on the same jagged lime rock that serves as the lion’s base. I was instantly connected to the unknown GIs, who might still be alive in their 90s in the U.S. or passed on to Elysium. It was a unique opportunity to live history.

Hell had come to Okinawa in 1945 in an operation called the “typhoon of steel,” trapping both Americans and Japanese in the inferno. Many were lost, yet the Stone Lion of Tomori stood strong to protect them. It stopped many bullets.

Perhaps, as long as the stone lion stands facing Mount Yaese, it protects us still.

Times: The park is open 24 hours, seven days a week

Food: Nothing available on site, but there are picnic tables available.